tl;dr: A clash of cultures produces the conflict necessary for art...

I enjoyed many aspects of Swimming Pool. The female leads both gave excellent performances: Charlotte Rampling's is noteworthy for the strength of her character portrayal, and Ludivine Sagnier, while having an easier character to portray (a hedonistic young French woman), deserves much credit for her lack of inhibitions and for several scenes (particularly her dance scene) which will please anyone with an eye for female beauty and the power it can wield. 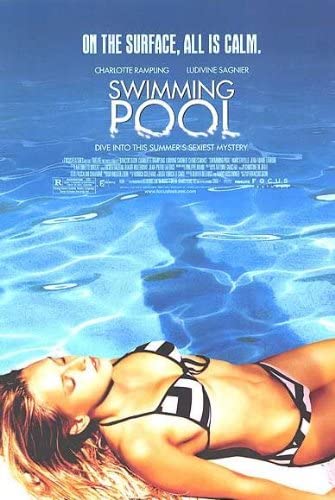 The story is, on its surface, a clash of cultures between a staid, uptight British author who only imagines nefarious doings and hedonistic pursuits, and a young free-spirited French woman whose life is mostly devoted to actually partaking in pleasures of the flesh. However, by the end, the viewer realizes that what has actually been portrayed is a depiction of the artistic process. How does an artist absorb information from the world around them, especially from a muse, and then transform that into art? To what degree is reality altered? What is fact, and what is fiction? And even more importantly, what do the alterations and choices made by the author reveal about them, as opposed to the subject of the artwork?

Similar questions are posed in the 2002 film Adaptation, which was my favorite of the year, and which I would still recommend as a better movie than Swimming Pool. However, Swimming Pool definitely has its pleasures, and is worth seeing. After all the fuss we had with France over the war in Iraq, it is good to be reminded that France has its positive attributes, Ludivine Sagnier being one of them.