Why I am a smartwatch skeptic

Been there, done that.

I get a tinge of nostalgia as I watch Apple's efforts to market the Apple Watch, a revolutionary device that brings highly personalized information to one's wrist. With the Apple Watch you can receive notifications and short text messages such as “Call home”; check the game score of your favorite professional sports team; get stock quotes and the closing Dow Jones Industrials average; receive weather updates, plus more! However, everything I listed here was possible in the early 1990s with a product and service marketed as the Seiko MessageWatch, which was developed by Seiko in partnership with a U.S.-based startup company that I worked for called AT&E Laboratories. 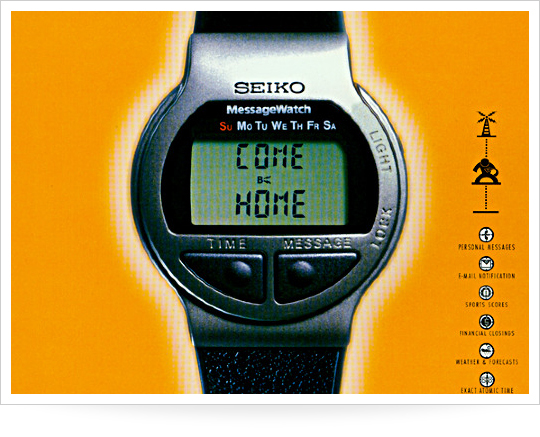 The world was a very different place 25 years ago. Cellphones at the time were still big and bulky (but getting smaller and more portable...), and were primarily used by traveling salespeople who could keep them in a vehicle to run off the car battery. People who needed to be on call carried pagers on their belts, with the primary users being doctors, businesspeople, and (ahem) what would today be called “independent sole proprietors running unlicensed medical cannabis retail delivery services”. The MessageWatch was effectively a revolutionary advance in paging technology that collapsed the pager into a wristwatch and dramatically boosted (by a factor of 50x) the digital throughput of the paging network, which allowed it to be used to deliver information services in a pre-wireless Internet era.

Seiko manufactured and sold the MessageWatch through their retail channels, and supplied the components that constituted the watch (the band, LCD, microprocessor, circuitry). AT&E Laboratories, the company I worked for, designed and operated the information service and transmission system, which used FM radio stations' subcarrier band to send packets of information to the MessageWatches. AT&E engineers also wrote most of the software inside the watch itself to receive, parse, and display messages (this is primarily where I worked).

Fast forward 25 years: the Apple Watch is superior in so many ways to the Seiko MessageWatch. The Apple Watch's display is gorgeous; it has a much more powerful processor and software stack; it has a two-way touch interface instead of buttons; it contains a variety of body and motion sensors; and although both watches would be classified as “bulky” in comparison to unintelligent watches, the Apple Watch is much more stylish (the initial Seiko MessageWatch was like the Ford Model-T: it came in one band color, black). That said, there are two dimensions where the MessageWatch outdid the Apple Watch: it was fully functional without being pared with a cellphone; and it had a battery life measured in months instead of hours (the sole advantage of using a 4-bit microprocessor running at 50KHz that was in sleep mode >95% of the time).

All that said there are some important lessons I learned from those days which I believe apply to Apple Watch:

1. There is only so much you can do with a one inch square display.

How many legible characters can be displayed on a one inch screen? Fifty, perhaps? That's not even half a tweet before the user has to scroll and select something more to see. A smartphone with a large display can do so much more. Instead of a quick summary of the weather, a smartphone can display a detailed forecast and show Doppler radar and temperature maps. Instead of a sports score, the smartphone can display graphics of the game in progress and show real-time video and game highlights. Smartphones have achieved wider usage and utility as screen sizes have increased; Apple's iPhone6Plus shows they have learned this lesson. Phablets (phone/tablets) are the smartphone category winners, but no one is going to want to put a wablet (watch/tablet) on one's wrist. Because of the power and utility of cellphones and smartphones, a whole generation has come of age that is not even used to wearing watches. The Apple Watch will be challenged to overcome all these trends. 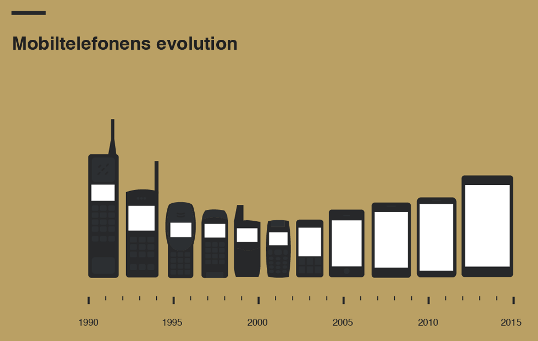 2. A watch is almost solely a fashion accessory.

Actual utility of a watch matters little. If it mattered more there would be no market for expensive hand-crafted mechanical timepieces that require regular winding, setting, cleaning, and maintenance, and that can't keep time as accurately as a quartz watch. Watches are primarily jewelry: a bracelet, an accessory to one's outfit, a status symbol. While a minor portion of the watch market is concerned with features and functionality, the largest share by far is not. I wear a watch primarily because I have worn one for so long that my left arm feels strangely naked without one. A secondary reason is that in meetings, it is nice to be able to quickly obtain the time via minimal body movement. My preferred line of watches is Citizen's Eco-Drive series, which is entirely maintenance free: never needs charging, winding, or new batteries, and keeps highly accurate time (so no setting). Apple gets this to a certain extent, which is why they've partnered with fashion houses on bands and introduced a gold version, but I still suspect there is a major lesson they will learn here.

Other issues for the Apple Watch:

Body sensor technology is intriguing and appeals to our inner scientist, but do many non-athletes really want to measure themselves that closely? Our country's obesity epidemic would suggest that many folks aren't bothering to step on a scale on even a monthly basis, or if they are, they are not acting on that information. Do many people really want or need to receive notifications on their wrists as opposed to their phones? I have disabled almost all notifications on my phone to minimize distractions and permit greater concentration and focus on the task at hand – the last thing I want is notifications on my wrist.

I do have to give Apple credit. I always applaud innovators for trying, and they can certainly afford to from a financial perspective. They've already sold several million Apple Watches, so they've exceeded the sales of the Seiko MessageWatch. But I don't see the Apple Watch as a category creator anywhere on par with the iPod, iPhone, or iPad, the latter two being two of my favorite technology inventions ever.

I see the Apple Watch as a smartphone accessory that will appeal to a small segment of the population: Apple product fanatics, some health and fitness fanatics, and some techies who always want to be on the leading edge. As for me, I'm sticking with my Citizen Eco-Drive, which is entirely disconnected from my iPhone6. It is precisely 7:37pm according to each.

p.s. For those wondering about the fate of the Seiko MessageWatch and the company I worked for: AT&E Laboratories was effectively a pre-dotcom era (circa. 1989-1991 instead of 1999-2001) public company with very little revenue (this is a story for another blog post). The company went bankrupt early in the MessageWatch's rollout when it was unable to raise additional capital on Wall Street. Seiko, to its credit, bought the assets out of bankruptcy court and rehired many of the employees (I found another job before they did so). Seiko operated the service and introduced new models for another five years or so before shutting down the service once and for all. Microsoft later utilized almost exactly the same technology (an FM subcarrier information channel) and product/service concepts to introduce their line of SPOT (Smart Personal Objects Technology) smartwatches in the mid-2000s, with the service being called “MSN Direct”. It also went under.