tl;dr: Asimov's writing is more impressive for its quantity than its quality... 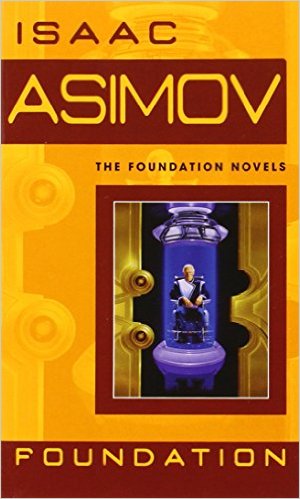 In recent years I’ve enjoyed catching up with some science fiction classics that I missed when they first came out: Frank Herbert’s Dune and Orson Scott Card’s Ender’s Game in particular. Isaac Asimov’s Foundation Series, which expanded from a book to a trilogy to a series, was another classic that I had not read. I do recall reading some Asimov when I was a teenager, although he didn’t impress me then: I was more captivated by Ray Bradbury and Kurt Vonnegut. So I decided to give Foundation a try.

I won’t be continuing on to read the rest of the trilogy and series, as I didn’t find much special at all about Foundation. Sure, the storyline should appeal to those who believe that science and technology can solve many of the problems that face mankind. It also has a strong element of the technology nerds triumphing over less intelligent power hungry politicians without having to resort to violence.

But there’s not much beyond the fairly straightforward, linear plotline. The characters are one-dimensional, lacking complexity and subtlety, and at any rate they don’t stick around for long, as the book takes place across multiple generations of people and time. Asimov does have a few interesting ideas about a field he calls “psychohistory”, which somewhat corresponds to what we now call “behavioral economics”, and which (in the perfected form presented in Foundation) can be used to predict the future of human events. But i found it hard to swallow another premise of the story, which is that humans could forget previously learned knowledge on a large scale and thereby devolve their technology.

The book reads like what it is: one of the more than 470 books authored by the prolific Asimov. It’s an impressive feat, but it did not leave him much time to write multiple drafts and fine tune his sentences. I find Ray Bradbury’s prose, by contrast, to be craftsman-like, worthy of emulation, and at times poetic. Asimov’s quantity, not his quality, is what is most impressive about his writing.

Perhaps I ought to give one more Asimov book a try: I, Robot, which contains one of Asimov’s most well-known contributions to the field of technology: his Three Laws of Robotics. With robots, AIs, and self-driving cars advancing rapidly, the ethical problems envisioned by Asimov will become more commonplace. Then again, Asimov’s laws are well known, and they’re pretty much just a starting point for the development of more detailed guidelines. So perhaps there’s no need for me to read more Asimov.