tl;dr: Don’t ever expect the FCC to know all that much about communications technology...

I had a broadband Internet connection for my home for many years, but no longer as of February 4, 2015. The reason is entirely due to the Federal Communications Commission.

Some background: the first modem I owned in the early 1980s, of the analog acoustic variety for communicating over the voice telephone network, ran at 300 baud (roughly, 300 bits per second or bps). The ASCII-encoded text spewed out by my 300 baud modem, when downloading and displaying a text file, was about as fast as a normal human being can read. I thought it was plenty fast for most of what I wanted to do at the time, namely my computer science homework. I had a buddy at college who had a professional-grade terminal with a 1200 baud modem, which displayed text way faster than it could be read. I thought that was impressive but a bit of overkill, especially factoring in the price it cost.

Analog modem technology kept doubling in speed every few years, eventually topping out at the speed of 56Kbps. That’s because 56Kbps is the maximum amount of information that can be carried through the voice telephone network over a single voice circuit (think traditional landline telephone call). That boundary, believe it or not, used to be the definitional boundary between narrowband and broadband.

I’ve been doing wide-area networking since the early 1980s. I signed up for my first home Internet service, using dial-up, in the mid-1990s (I used the Internet prior to that at work). Sometime around 2000 or so I got a broadband home Internet connection, and over the years I’ve had both cable and DSL Internet service. Today I’m fortunate to live in an area with three Internet Service Providers that can run a wired circuit to my home to offer me multi-megabit per second Internet access: Comcast Xfinity, Wowway, and AT&T U-verse. For the past four years or so I’ve had AT&T U-verse service at 13Mbps downstream, for under $60 per month.

I use U-verse, which is based on VDSL technology, instead of cable, which can achieve higher peak-rated speeds, for the following counter-intuitive reason: what matters most is speed during peak hours, not peak speed across all hours. With cable Internet service the coaxial cable that runs to your house also runs to your neighbors’ houses; you can sign up for 50Mbps Internet service, and you will get that speed at times, but that bandwidth is shared. When your neighbors who also have cable start heavily using the Internet, your speed can degrade significantly. By contrast a DSL circuit is not shared: I have a dedicated 13Mbps circuit to the equipment cabinet in my neighborhood that terminates the circuit, combines my Internet traffic with other U-verse customers, and sends it over a fiber-optic circuit further into the Internet. I don’t have many neighbors sharing that fiber-optic circuit, as most of my neighbors have cable, so I get my 13Mbps all the time (I don’t continually measure it - there’s been no need to).

A solid 13Mbps Internet service is perfectly fine for streaming 1080p Netflix (which requires around 4Mbps) and other video, for downloading HD-quality movie files faster than they can be watched, for doing Skype and Hangouts and other video conferencing services, and for working from home. Maybe someday my family and I will need more Internet bandwidth, but we’re perfectly fine for now, and why pay for more than you need? Note that this is the same philosophy I had thirty years ago, even though my wide-area networking circuit speed is now more than 43,000 times faster.

Into this perfectly fine situation steps the FCC, which on February 4, 2015 increased the speed threshold for an Internet access circuit to be classified as broadband to 25Mbps, nearly twice the speed of my Internet connection. Like all too many folks the FCC is seduced by the peak speed figure and doesn’t understand how it is but one factor in determining the quality of experience Internet users receive. The “oversubscription rate”, which measures how many users share the same available circuit bandwidth, is equally as important (and good luck ever finding that spec in any advertisement for cable Internet service). Furthermore, there is a glaringly obvious political move taking place with the FCC’s redefinition of broadband: it allows the FCC to produce statistics showing that a majority of American households have zero or one broadband Internet options, thereby justifying further government intervention and regulation of the Internet Service Providers by the FCC. 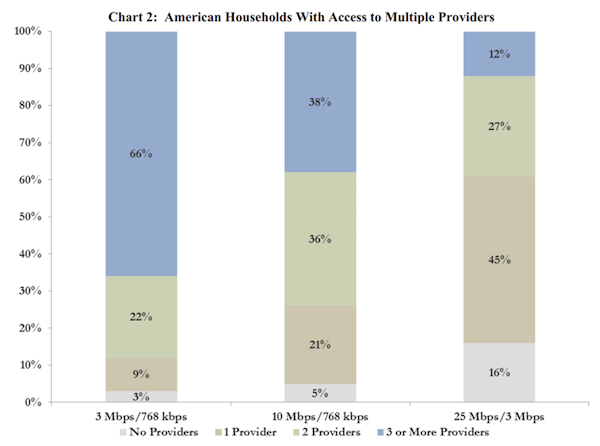 Regardless of what the FCC is telling me, I plan to continue happily living without a broadband Internet connection.