tl;dr: A once-in-a-lifetime (so far) lucky travel delay led to my only day ever at Spring Training...

With the World Baseball Classic (WBC) making its quadrennial appearance, and Spring Training underway, it is bringing back memories of the last WBC and the one and only time that everything went right for me during a travel delay, resulting in an absolutely perfect day.

Usually during travel delays I end up spending hours stuck in the public areas of the Philadelphia airport, or Newark, or (shudder) LaGuardia. I am well used to this, which is why I always travel with many hours of extra reading material on my iPad. If I get stuck overnight, it is typically in a small city with infrequent airline service such as Huntsville, Alabama; Monroe, Louisiana; or Regina, Saskatchewan. I have yet to be stranded in Manhattan, San Francisco, or Los Angeles. 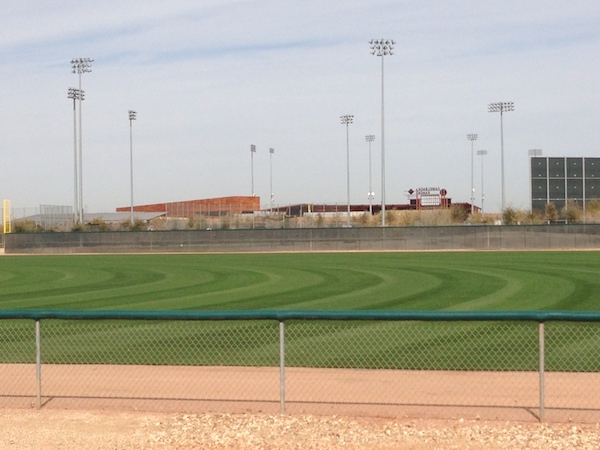 Small fraction of the back fields at Camelback Ranch, with main stadium in background

Four years ago I worked for a company that had multiple design centers which I would visit to spend time with the engineers, including one in Goleta, California, just north of Santa Barbara. I happened to schedule a trip there in March; there was no particular time urgency, it could easily have been scheduled for February or April (this turns into lucky break #1). Santa Barbara, being just 100 miles from LAX, has a small airport with flights to a only few cities, not including Chicago. So I would have to change planes somewhere. Following the “cheapest ticket” travel policy of my employer, I booked a roundtrip ticket on US Airways, which had a hub in Phoenix (lucky break #2) from the acquisition of America West Airlines. When I bought the ticket I knew Spring Training would be happening and I briefly considered spending some time in Phoenix, but this would have meant breaking up my roundtrip ticket, paying a lot of money out-of-pocket, and burning some vacation time. So I was just a through traveler.

I spent a few days with the design team in Goleta, and on the morning of my return trip to Chicago via Phoenix, I got word of a major late season snowstorm bearing down on Chicago. The airlines have gotten smart about adjusting their operations for storms: they avoid flying planes into airports about to be hit with snowstorms, lest those planes be struck on the ground (and hence useless) for many hours. US Airways had canceled my mid-day flight from Phoenix to Chicago (lucky break #3) but they expected to resume operations late in the day. So they still had a scheduled end-of-day flight to Chicago (lucky break #4) which was not a red-eye: I value sleep too much to be a fan of red-eye flights.

Sensing the possibility of pulling off a major coup, I called the airline to rebook my flight. They wanted me to stay in Santa Barbara and take a later flight to Phoenix that would connect to the end-of-day flight to Chicago, but I was able to convince them that I preferred keeping my early flight to Phoenix and waiting around in the Phoenix airport all day 😉. They accommodated my desired rebooking with no charge due to the storm (lucky break #5).

By then I had checked the Spring Training schedule and saw that my team, the Chicago White Sox, would be playing at home that day (lucky break #6), so I wouldn’t have to choose between seeing the facility and seeing the team play. Furthermore, the opponent that day was not just another Cactus League MLB team: it was Team USA, an all-star team of U.S. players including David Wright and Joe Mauer who were preparing for World Baseball Classic competition (lucky break #7).

From that point my new travel plans went off without a hitch (I eventually made it home late that night). When I got to Phoenix I rented a car and drove to Camelback Ranch. I was able to buy a ticket for the front row seat closest to the front end of the White Sox dugout (lucky break #8). I had plenty of time before the game to wander the back fields, enjoying the pleasant weather and the lush green grass (a small luxury after a long Chicago winter). 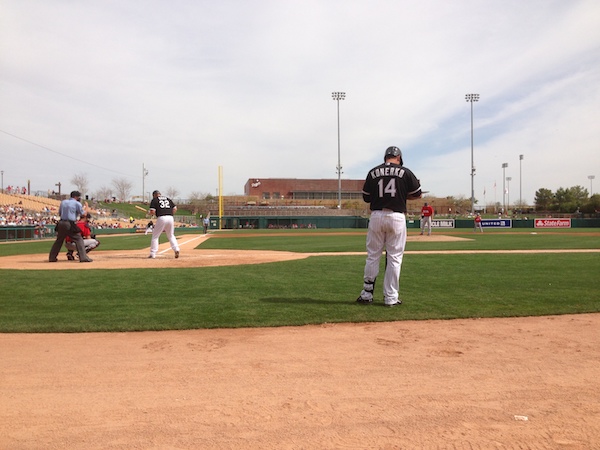 The view from my seat

What impressed me the most as a baseball fan was the enormity of the operations of an MLB club (actually two, since the Dodgers also train at Camelback Ranch). The MLB club is but the top of a large pyramid. At Spring Training, all the players from all levels are in camp, so there are well over 100 players doing drills, taking batting practice, getting instruction, and playing in scrimmage games on the back fields. Most of those players toil away in the minors, with only a fraction getting a shot in the majors, and fewer of those sticking around for long. It’s a big business with lots of people, most of whom you never see when you follow the big league team.

The atmosphere was incredibly relaxed, among the players, the fans, and the stadium personnel. I definitely recommend to all baseball fans that they attend Spring Training if they are able; it is a slice of baseball heaven. To top off an absolutely perfect day, the game ended in the most appropriate score possible for a Spring Training game: a 4-4 tie.