Impressions of Ernest Hemingway’s A Farewell to Arms

tl;dr: Simple, straightforward, lives up to the impression I had built up in my mind over the years...

Strangely enough I had not read any of Ernest Hemingway’s novels until now. I may have read a Hemingway short story or two in high school, but the English classes I took tended more towards Shakespeare, Thomas Hardy, and Nathaniel Hawthorne when it came to reading longer works, all of whom were considered more highbrow. Hemingway's novels might have been taught in the more remedial English classes. Somewhere over the years I had heard that he wrote novels in the matter-of-fact prose of a newspaper reporter. Not having read his novels, Hemingway’s epic globe-spanning life story was more familiar to me than any of his works. So after visiting the very final town where he lived (and killed himself), Ketchum, Idaho (a fun resort town in a beautiful setting), and after skiing the Hemingway run at the Sun Valley ski resort, I figured I finally had to read one of his novels to see what all the fuss was about. 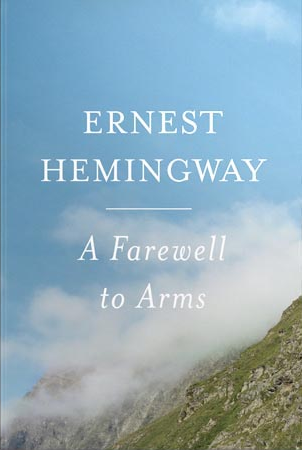 Hemingway’s writing style in A Farewell to Arms is indeed rather simplistic: not quite at the level of Dick and Jane, but much closer to that end of the sentence complexity spectrum than the other. This is especially evident in the dialogue between the characters, some of which induced chuckles as I could not imagine any two people speaking to each other in the trite words that Hemingway wrote. Especially funny are the conversations between the first-person narrator and an Italian doctor who overuses the word “baby” in reference to the narrator. Because of the simplicity, A Farewell to Arms is a quick read, much faster than reading Saul Bellow.

Yet there is something about the story that Hemingway tells in A Farewell to Arms that drew me in and made me accelerate towards the end of the book, eager to reach the conclusion that I was expecting. The moral of the story is an old one (war is hell), and the depictions of the horrors of battle aren’t quite as graphic or as powerful as can be found in other, more modern writing. To cite one example that I’m familiar with, in the approximately 2,500-page Liberation Trilogy author Rick Atkinson goes on for around 2,400 pages depicting various horrors on the World War II battlefield. 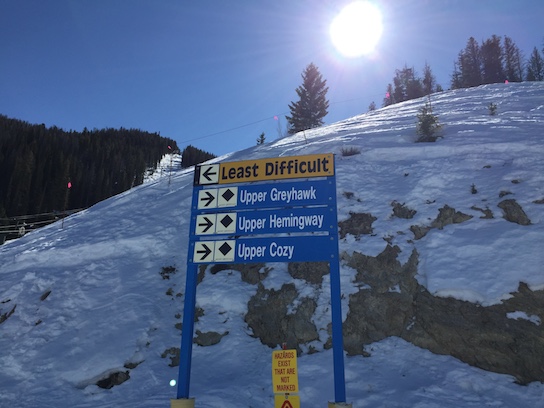 Taken from the traverse to the Hemingway run at Sun Valley

I think what hooked me was the contrast in the storylines between the narrator’s battlefield experiences and the life the narrator leads during his respites from battle. There’s a love story at the center of A Farewell to Arms which puts life and death in stark opposition. The love story is so fortuitous, and the life the two protagonists lead together is so perfect, that one knows it cannot last. By showing how wonderful love can be, Hemingway is showing how terrible war is.

I don’t think there are any subtle messages in A Farewell to Arms that require multiple readings to unearth; the meaning does not seem subject to much interpretation. The first person narrator also shares many traits with Ernest Hemingway himself: he is a man’s man, an outdoorsman, and a heavy drinker. Hemingway does not appear to engage in much obscuration at all. I do think that A Farewell to Arms would be a good book to teach at the high school level.