Why Jeff Bezos should choose Chicago for Amazon’s HQ2, and why he won’t

tl;dr: Chicago is the best choice in all areas except the one that matters most to Bezos...

Why Bezos should choose Chicago

First let's start with the advantages that Chicago offers any business, described here. Then let's consider the needs that Amazon has stated for HQ2.

Amazon has said they’ve outgrown Seattle: there is not enough physical room for expansion, and they already have hired a significant percentage of the local tech talent and graduates. They claim to need land, buildings and enough talent to staff HQ2 with up to 50,000 employees, many of them technology folks.

Chicago would appear to be the ideal fit, for the following reasons:

Amazon is a big fish in a small pond in Seattle; here in Chicago they’d be in a much bigger pond, one of only four U.S. metropolitan areas with two Major League Baseball (MLB) teams. MLB teams have to sell tickets to 81 home games, which is why they are a good proxy for metro size. Amazon would be a major player in Chicago but they wouldn’t be alone; in fact they’d be rejoining Boeing, which moved their headquarters from Seattle to Chicago last decade. Ease of air travel to anywhere in the country and world was a key factor for Boeing, and that should also matter to Amazon as their empire grows. At least four airlines today fly non-stop flights between Chicago and Seattle: United, American, Southwest, and Alaska, so it would be easy to get between the two headquarters locations. Chicago is a major Internet, air, and ground shipping hub, and Amazon relies heavily on all of these networks. 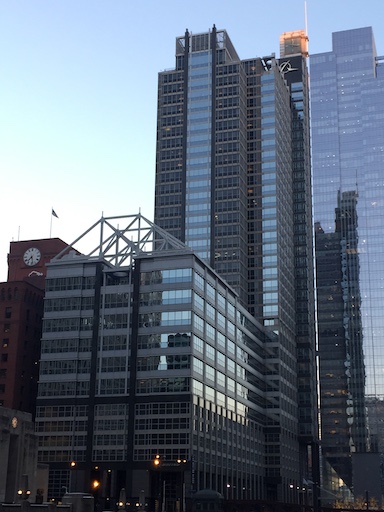 World headquarters of Boeing along the Chicago River

2. Buildable land in a city that permits building

I’m not going to list the nitty-gritty details of the multiple locations in Chicago’s proposal, but Chicago is offering a wide variety of possible settings for Amazon’s HQ2, depending on what style of campus or building(s) Amazon wants. There is a huge parcel of about-to-be-developed land in an area south of the Loop, which would still be fairly close to downtown. There are industrial sites in the near north end that are prime for redevelopment as a campus of office buildings. The West Loop is currently hot; McDonald's is moving from their suburban headquarters into a new West Loop building under construction. If Amazon wanted to build a skyscraper (the U.S.’s new tallest building?) in the Loop itself, they could cut a deal on the Thompson Center block, owned by the state, which is due to be torn down or built over or around. If they immediately wanted space in an existing building, they could take over the early-20th century post office building. They could even become the name tenant in what used to be the Sears Tower, the prior headquarters of the U.S.’s dominant retailer of last century and the current tallest building in the country, ignoring decorative spires and antennas. Okay, there’s no way Amazon would move into the old Sears Tower, but it shows the breadth of possibilities. 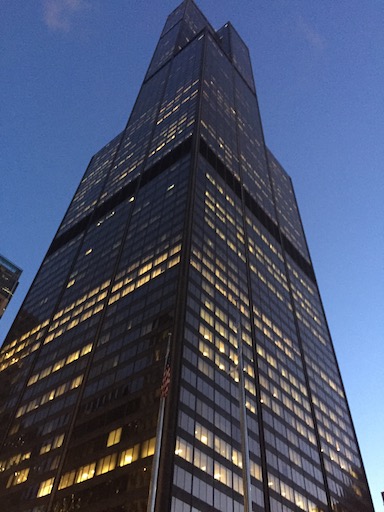 By coming to Chicago, Amazon would be the most visible major technology company in Chicago, which would give them access to talent from all the local, state, and regional Big Ten universities whose graduates currently head to Chicago to begin their careers. The Big Ten schools in particular are huge; it is hard to envision Amazon or any other one company exhausting those sources of talent. Some of that talent gets recruited by west coast technology companies: Marc Andreessen, the founder of Netscape and the Andreessen Horowitz venture firm, and Steve Chen and Jawed Karim, two of the founders of YouTube, all studied computer science at the University of Illinois Urbana-Champaign, which claims to award more CS degrees than any other university. Amazon would be in a great position to divert even more of that talent to Chicago. Talent tends to be more affordable in Chicago than in coastal cities, as everyone benefits from the lower cost-of-living (esp. housing) in comparison to a place like San Francisco. Turnover also tends to be lower in Chicago. Access to talent should be Bezos’s primary concern, and should be the primary reason he chooses Chicago.

As much as he might like to portray himself as a progressive, owning The Washington Post and thereby battling Donald Trump, Jeff Bezos is, to put it bluntly, a tax dodger. It’s not random happenstance that America’s dominant online retailer was founded in Seattle. Being in Washington has allowed Bezos and Amazon’s headquarter’s employees to avoid paying any state income taxes (see my discussion of Washington’s tax structure in comparison to Oregon’s). Even more importantly, up until just recently when Amazon finally caved after years of pressure from lawmakers and Amazon’s competitors, Amazon did not collect any sales taxes from customers, claiming that since they did not have a physical presence in any state except (originally) Washington, they didn’t have to charge and collect sales taxes. This gave Amazon a huge competitive advantage in the razor-thin-margin retail business versus brick-and-mortar stores. Buy a book at now-defunct Border’s or a flatscreen television at now-defunct Circuit City and they would charge you the local sales tax rate, perhaps 7% or more. Buy it on Amazon and have it shipped and you could dodge the sales tax.

The sales and income tax dodges were huge competitive advantages for Amazon for many years; they were literally a key element of Amazon’s business proposition. In retrospect, where would be the best place to found an online retailer to take advantage of both those sales and income tax dodges? It would be in a state with no income tax but a small share of the overall U.S. population, so that there wouldn’t be too many customers subject to home-state sales taxes. Thus Amazon was based in Washington and not a more populous zero-income-tax state such as Texas or Florida.

Amazon is one of several high-flying startup companies whose success is based to some degree on dodging taxes and regulations. Airbnb dodges hotel taxes and regulations, Uber and Lyft dodge taxi regulations, Google dodges copyright regulations, and all “user content platforms” such as Facebook dodge legal liability for what is published on their platforms (as opposed to newspapers and traditional media). I’m not saying here whether this is ultimately bad or good for the country; I’m just pointing out facts.

Amazon did finally cave on the sales tax issue, which has allowed them to (finally) open physical distribution centers where it makes geographical sense to do so; and they have since opened several in the Chicagoland area. The state income tax issue, however, remains. Bezos has amassed a considerable fortune in Amazon stock, which he will no doubt liquidate over time, paying capital gains income taxes upon those sales. Living in Washington, he only has to pay federal income tax on those gains. But if HQ2 grows to eclipse Amazon’s Seattle headquarters, and Bezos finds himself spending a majority of his time at HQ2, he’d have to pay income tax in the HQ2 state.

The state income tax rate in Illinois is not too bad in comparison to states such as California and New York: it has fluctuated between 3% and 5% in the time I have lived here. It is currently 4.95%, although almost certainly headed higher to deal with Illinois’s unfunded pension liabilities. But whatever it is in the future, it’s a lot higher than what Bezos currently pays, which is zero.

The other distinct possibility, which is depressing to me, is that Bezos chooses one of the three Washington D.C. area sites on the finalist list of twenty metro areas. This could be a visionary move by Bezos or a huge mistake.

On the visionary side: there is no doubt that Washington D.C. exerts more control over the economy and the fortunes of individual businesses than twenty years ago, through regulation, tax policy, and judicial investigations such as anti-trust. There are many other issues where the government wields influence, such as what should the U.S.P.S. charge Amazon for last-mile shipping services? Trump is probably an aberration, and the long-term trend towards greater D.C. control will resume once he leaves office. Bezos already controls the primary newspaper read by every D.C. politician, which gives him a platform. He could bet that, if he puts a major facility in the D.C. area, it is unlikely that the U.S. government will ever go after Amazon with full vigor. Instead, the government will work hand-in-hand with Amazon to maintain Amazon’s dominance.

On the mistake side: Washington D.C. is a government town, filled with very smart people but who lack an entrepreneurial mindset. When someone says “it was a political decision” it does not mean that the decision was based on a rational analysis of the facts. There’s a reason that the primary businesses in the D.C. area are defense contractors and non-defense government contractors. There would be little doubt in my mind that the Seattle HQ1 would continually outperform the D.C. HQ2.

I think (hope?) that the tax issue will outweigh politics. I really don’t see Bezos, who has amassed his fortune in part by dodging taxes, willingly subjecting himself and his headquarters employees to state income taxes. Maybe he’ll have a change of heart and prove me wrong, but I think the state that will land HQ2 is Texas, which, like Illinois, is also fairly centrally located. My prediction for HQ2 is Austin.

Update as of November 17, 2018: Amazon’s so-called HQ2 initiative turns out to have been a bait-and-switch. Amazon did not choose a second headquarters location to rival their Seattle headquarters. They received incentive packages that could total billions of dollars based on future hiring, and chose two locations for major new offices: the borough of Queens in New York City, just across the East River from Manhattan, and Arlington, Virginia, just across the Potomac River from Washington, D.C. As I predicted Amazon did not choose Chicago, but they also did not choose low-tax Texas. The incentive packages that Amazon received included various tax abatements and tax credits which must have made Jeff Bezos comfortable with choosing New York and D.C., where Amazon’s effective tax rate will be much lower than other companies in those locations. I neglected to factor in the extent to which large companies can negotiate their tax bills.

Update as of December 13, 2018: While Amazon was conducting its highly public HQ2 search in 2018, Apple Computer led a much more secretive search for a major new campus. Although Apple CEO Tim Cook made several trips to Chicago, and made some positive comments about the city to the press, in the end he too ended up passing on Chicago. Apple instead chose Austin, Texas.

Update as of February 14, 2019: Amazon announced that, due to strong opposition from a vocal minority of New York politicians and citizens, they are cancelling their HQ2 location in the borough of Queens, New York City, and will instead move forward with the Virginia HQ2 location, as well as do additional hiring in Nashville, Tennessee.