Entropy wins, in the end

tl;dr: We’re all doomed in the very long run, but we can maintain order for a while 😉...

Entropy: a function of thermodynamic variables, as temperature, pressure, or composition, that is a measure of the energy that is not available for work during a thermodynamic process. A closed system evolves towards a state of maximum entropy. (From dictionary.com)

Second Law of Thermodynamics: In a natural thermodynamic process, the sum of the entropies of the interacting thermodynamic systems increases. (From wikipedia.org)

Entropy, which can be thought of as the disorderliness of a system, is a somewhat theoretical concept when you study it in chemistry class. It makes some sense when you think about the canonical example: separating air molecules so that all the fast ones are on one side of a box and all the slow ones are on the other. Without a further expenditure of energy, the air molecules will naturally mix and the order will be lost.

In the real world, the truth of the above statements about entropy becomes painfully evident when you take one or both of these actions:

Yet may people, myself included, don’t always appreciate the inevitable triumph of entropy. 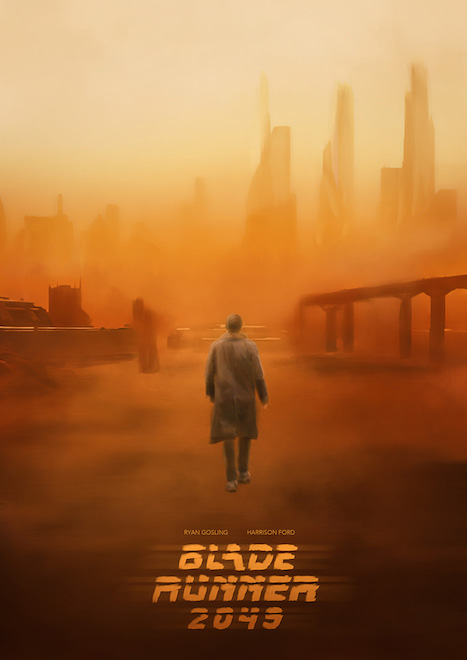 Las Vegas, according to Blade Runner 2049, if no energy is expended to maintain order

For twelve years my neighbor had parked a pickup truck with a camper in the back of his property adjacent to mine. I would watch it slowly rusting over the years and wonder what he would eventually do with it, aside from use it as a storage shed. I never saw it move. Finally, after turning eighty, he gave up and sold it for a pittance to two men who showed up with a full bed tow truck. They winched it onto the bed and drove it away. I watched with a wary eye, hoping that the camper would not collapse into a heap and spill onto my property. I silently cheered when the tow truck drove clear of my property boundary.

My neighbor was quite wistful while we observed the towing process. He recounted that the last time he used the camper was on an aborted trip to Alaska. He said he kept the camper so that he could some day resume that trip and make it to Alaska, but now that he had turned eighty he had decided he was too old. He spoke of the camper as though he could jump right into it, stock the larder with food, and drive it to the literal end of the road in the Alaskan frontier.

If the camper had been a building, the city inspector would have condemned it. The roof was warped; it was starting to cave in. On one corner the outer walls were no longer joined together and a six inch air gap had appeared; there were smaller gaps on other sides. The pickup’s engine couldn’t start; my neighbor expressed some surprise about this, but the buyers with the tow truck just shook their heads: they were fully aware of the state of the vehicle they had bought. Twelve years of cold Illinois winters, hot Illinois summers, rain, and snow had taken their toll. Metal expands and contracts, and seams burst. Rubber becomes brittle and cracks. Once seals are broken plants, insects, and animals intrude and cause further damage. Batteries and fuel mixtures separate and degrade. In short, entropy increases. If he had left the camper for another fifty years, I am sure it would be reduced to a pile of rubble.

As a homeowner I’ve experienced countless smaller-scale examples of what my neighbor experienced with his camper. Kids accelerate the entropic process: the energy they insert into a system tends to increase disorder rather than order. I try to take a more realistic view of the situation than my neighbor did with his camper, but I am still regularly surprised. The most recent example came when I sold my fifteen year-old gas grill on Craigslist. Knowing its condition (the sun had bleached its formerly black cover almost white) I didn’t ask for much money. When I went to clean it out I discovered that a family of mice had found its cabinet to be a wonderful winter shelter. They had brought in all sorts of soft debris for their nest, which I had to remove, along with one dead mouse body. I was happy to be rid of the grill, which freed me from having to put in energy to maintain its order.

Software also obeys the second law of thermodynamics, as it runs on actual physical hardware. A system that works perfectly well one day may fail the next day. Besides hardware failures there are many other events which can and do happen to degrade the performance of a working software system. Unexpected data and user actions get sent into the system, surfacing latent bugs. External APIs change and break various subsystems. Security issues are uncovered, forcing upgrades either within the system or external to the system, which can have detrimental side effects. Network connections get interrupted and third party services go down, sometimes permanently. It takes ongoing maintenance and the expenditure of additional energy to keep a software system working, even if no features are added.

One of the most vivid examples of entropy is in Blade Runner 2049, in the scenes that take place in Las Vegas after various catastrophes have depopulated the city, leaving its buildings and artifacts subject to the ravages of wind, sun, sand, and other natural forces. The scenes are starkly beautiful, to me, and show what the city might possibly look like if the worst were to happen and there were no people around to maintain the physical order of the system. A few electronic devices still operate, but they have glitches of the sort that we’ve all experienced when an electronics device is on its dying gasps. It’s a very powerful sequence of scenes, and yet another reminder of the ultimate triumph of entropy.