tl;dr: Chase Field was the first hot weather MLB stadium to get it right, and the Diamondbacks wouldn’t exist without it...

Arizona is a baseball mecca.

15 of the 30 Major League Baseball teams send all their major league and minor league players to Arizona for seven weeks of spring training every year. The scale of the spring training facilities is impressive, as I realized years ago on a visit to Camelback Ranch. The major league roster of 25 players is merely but the top of a much larger organizational roster of well over one hundred players all looking to get a shot at the big leagues.

To call these facilities “spring training camps” is a misnomer: the training facilities, fields, and main stadiums are in use year round by the major league clubs, for instruction, rookie league ball, and injury rehabilitation. In fact one way to view major league baseball is that 15 of the clubs have a “home base” in Arizona: in April each club sends the best 25 players to the major league city, and the other players are sent to other minor league cities, with some remaining in Arizona. But they all return to home base every February. 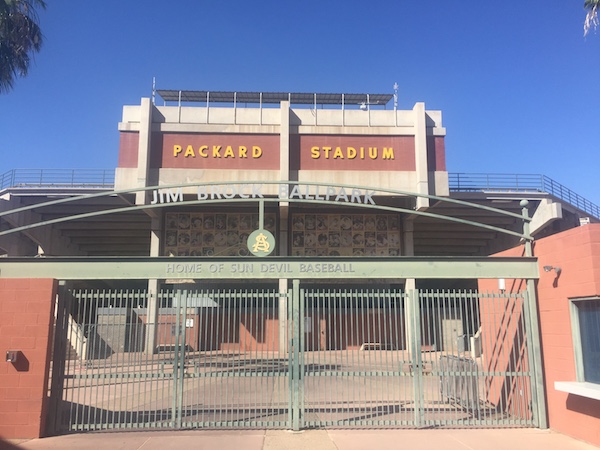 At the college level Arizona State University is a perennial NCAA Division 1 baseball powerhouse. I didn’t fully appreciate the number of stars ASU has sent to the major until I visited ASU’s baseball stadium and saw a display of their most famous alumni. All-time MLB home run king Barry Bonds attended ASU, as did “Mr. October” Reggie Jackson and Red Sox star second baseman Dustin Pedroia. Baseball is also very competitive at the high school level in Arizona. The parents of retired White Sox star first baseman Paul Konerko knew this: when teenage Paul demonstrated proficiency at baseball, the family moved from Rhode Island to Scottsdale, Arizona so that Paul could play baseball year round and compete at a higher level.

All of this baseball is played outside, in the Valley of the Sun, in temperatures that can often exceed 100 degrees Fahrenheit in the summer. Yet it was not until 1998 that Phoenix gained its first MLB franchise, the Arizona Diamondbacks, even though Phoenix was a major population center with a strong appreciation for baseball. In order to draw the several million fans necessary to support a major league franchise each year, there was one more necessary ingredient: an air-conditioned stadium. Without Chase Field, the Arizona Diamondbacks wouldn’t exist. 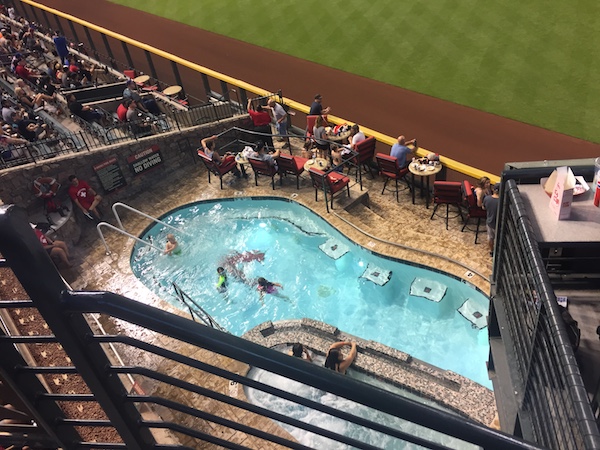 On every MLB fan's bucket list: the Chase Field pool

The most impressive aspects of Chase Field to me, as an engineer, are the air conditioning system combined with the retractable roof, which permits a natural grass playing surface. Chase Field is not the first air conditioned Major League baseball stadium. The Houston Astrodome, sometimes called the Eighth Wonder of the World, was air conditioned, but it had a fixed roof and artificial turf, as does Tropicana Field in St. Petersburg, Florida. The Texas Rangers in the Dallas area, where the temperatures often sore into the 90s and 100s in the summer, built Globe Life Park without a roof. Realizing their mistake, they are replacing it after only 25 years with a new stadium. Chase Field was the first hot weather MLB stadium to combine air conditioning, a retractable roof, and natural grass; Minute Maid Park in Houston and Marlins Park in Miami followed suit.

On the night I attended my first game at Chase Field, the roof and the air conditioning weren’t actually needed. Even though it was mid-June, clouds and rain had kept the high temperature that afternoon from reaching much above 80 degrees. I was hoping that the unseasonably low temperatures would encourage the stadium operators to open the roof for the night game; certainly I’ve attended outdoor games in hotter temperatures in Chicago. But whether because of a fear of lingering precipitation in the area, or a desire not to let in any warmer air at all, the roof remained closed. 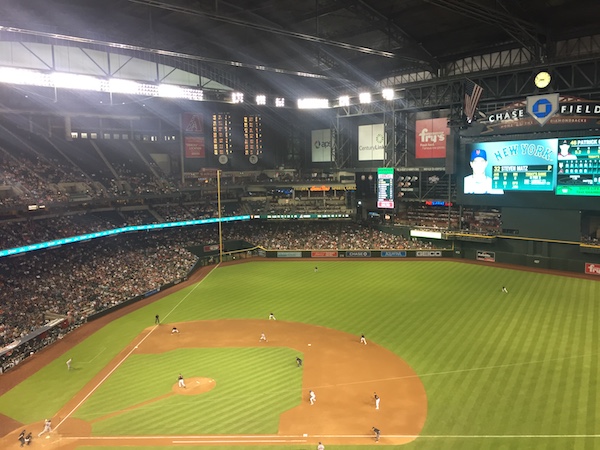 It was ever so slightly cooler once we passed through the outer doors into the enclosed air conditioned space. As we walked on the concourse in center field, I could hear the air conditioning system working away. It’s a sound to which Arizonans become accustomed. The stadium itself was a fine place to watch a ballgame. I give a thumbs up to the most famous features of the stadium, the pool and hot tub (complete with lifeguards) in right centerfield; I give a thumbs down to the weird angles in the outfield fence by the bullpens in the outfield corners, although they do lead to more triples.

Because of the need to completely enclose the space in order for air conditioning to work, Chase Field will never be my favorite retractable roof MLB stadium. Safeco Field in Seattle holds that title, because its roof can be retracted completely away from the field and the stadium seating areas. Even when Safeco’s roof is closed there is still airflow from outside the stadium beyond the left field bleachers. Chase Field, however, was an innovative solution to the challenges of building a home for a major league baseball club in a hot weather climate, and deserves kudos for being the first hot weather MLB stadium to get it right.

p.s. On October 12, 2018 the Diamondbacks announced that they will be installing in Chase Field an advanced baseball-specific artificial turf field in time for the 2019 season. The move will save large amounts of water and energy, as the roof won't need to be opened during the day to allow the grass to grow, which lets in hot air that then has to be cooled before a game. It makes sense, although I'm crossing my fingers that the artificial turf performs true to the game of baseball.