The upside of downsizing

I’ve reached the stage in life where it makes sense to downsize. It is a liberating experience.

I’ve known for most of my life that nothing lasts forever (see Entropy wins, in the end). Physical objects decay and break. While you own them they need to be dusted, cleaned, maintained, and repaired. The more physical objects in the household, the more time the heads of the household spend taking care of those physical objects, and the less time they have to spend on other pursuits which are more pleasurable and/or enlightening. It’s all for naught in the long run. As the expression goes, “you can’t take it with you”.

What stands the best chance of lasting long-term? It’s certainly not a human being, with a finite lifespan. Nor is it a physical object such as a photograph, painting, or statue of said human, which decays even if it is maintained. Information, in digital form, has the best chance of lasting for astronomical time scales, only because it is easily copied and transported.

Astronomers tell us that, billions of years from now, the sun will become a red giant, possibly engulfing Earth. For anything to survive that event, it needs to be transported off Earth. Transporting humans off Earth is exceedingly expensive, in terms of energy and currency. Transporting objects off Earth is also expensive. Transporting digital information off Earth is cheap and easy: modulate it onto radio waves, and aim an antenna at the sky. 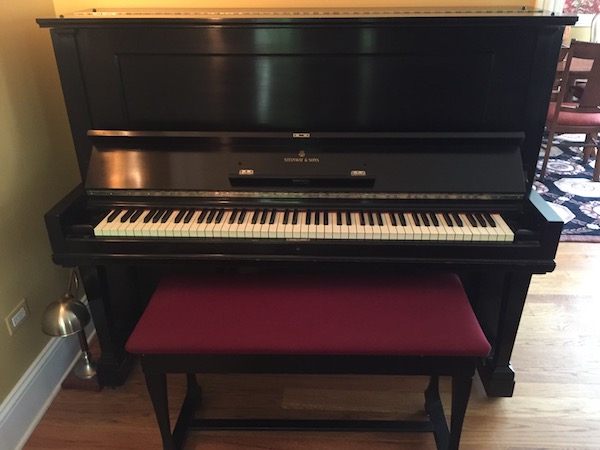 I do have a few small collections (some baseball cards and favorite books), but because of the realities described above I’ve never been terribly sentimental about physical objects. I’m more apt to view them as a chore. One of the most enjoyable summers of my life was after I graduated from Cornell, when a friend and I did a cross-country motorcycle trip. For three months every physical object I used, including clothing, toiletries, tent, and sleeping bag, had to fit onto the back of a motorcycle. We couldn’t carry much with us, but we had a great time nonetheless.

Saying goodbye to objects that my wife and I are not likely to ever use again has multiple upsides. In some cases we can give the objects (such as kids’ clothing and athletic equipment for sports which were just brief childhood fascinations) to others who can make better use of them. In some cases we sell it cheaply on Craigslist (such as my snowblower), and it ends up with someone who appreciates it and is happy to get it for a bargain price. In pretty much all cases, I am reminded of Douglas Adam’s description of the SEP field, which makes objects invisible by turning them into Somebody Else’s Problem (SEP). It is a joy to watch many of these objects disappear, and to never have to deal with them again because they are somebody else’s (problem).

This downsizing episode is the first time I’ve seriously used Craigslist, and I am impressed. The site design is so old school that I believe it qualifies as “retro cool”. It does show the power of markets and the network effect, as its primary value is the large number of people who use it. I was able to sell our 1906 Steinway upright piano on Craigslist and many other items. Furniture, I’ve learned, does not command much money at all. I’m sure you could furnish an entire house with decent furniture for a few thousand dollars by bargain hunting on Craigslist. I talked to a salesman who moved himself and his wife, a nurse, from Illinois to Arizona in just a car, by using Craigslist to sell almost everything in Illinois and to buy used furniture when they got to Arizona.

I’m looking forward to continuing the downsizing process and to simplifying my life. I have a few hobbies and activities that I most enjoy doing, and downsizing will free up time to focus on those.