The cord has been cut

tl;dr: Done, I think, with cable and satellite TV: the streaming video future is here...

I got rid of the landline phone years ago, once everyone in the household had cellphones and there was no longer a need to have a phone linked to the house. My biggest concern at the time was technical performance: the reliability of the cellular network, the voice quality (not as good as a landline, but adequate), and coverage throughout the home (okay but not great). A side effect, which everyone enjoyed, was ending the spam telemarketing calls on the landline. Now, years later, with the advance of other communication services, most of the calls we get on our cellphones are spam telemarketing calls. The Public Switched Telephone Network (PSTN), in my mind, is all but dead as a useful communications technology.

For television service I likewise had technical concerns about services based on streaming video over the Internet. The Internet wasn’t really designed, initially, to carry video. Yes IP multicasting has been around for decades, but it was never widely adopted, as people prefer watching individualized video streams. Video takes a tremendous amount of bandwidth in comparison to other data-oriented services, and I’m someone who started doing wide-area networking with a 300 baud modem. Delivering high quality, mass market video over the Internet requires high speed Internet access lines, minimal amounts of congestion (because there are no bandwidth reservations in today’s consumer Internet services), and tremendous amounts of video server capacity at the edge of the service provider’s network.

My choice for television service since 1996, for technical and quality reasons, was DirecTV. Back then picture quality was the primary selling point for DirecTV, and there were valid technical reasons why DirecTV was higher quality than analog cable TV service and over-the-air analog NTSC TV. When you walked into a high end home electronics store in the mid-1990s, the televisions on display would all be tuned to a DirecTV channel, because that was the highest quality video source available at the time. The main downside of DirecTV was occasionally losing the signal during major storms, but it actually was more reliable than cable TV service. Local channels were also not available when I first got the service, but I didn’t care much about that.

Over the years, as television standards and other technologies advanced, DirecTV lost its picture quality edge. DirecTV is a satellite TV service, so upgrading their infrastructure literally means launching satellite payloads into geosynchronous orbit around the equator. A new satellite was needed to start offering HDTV, yet DirecTV also started relying upon compression, which reduces picture quality. As the race to add more channels in HD intensified, they had to do more compression. The loss of quality was noticeable, especially when watching sports: balls and hockey pucks would stutter across the screen. Watching over-the-air HDTV became the way to experience the highest quality picture. 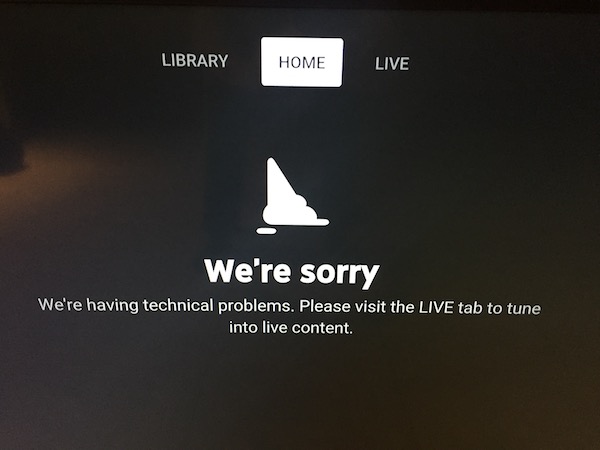 YouTube TV brings the occasional 500 error to your TV screen

In 2005 YouTube was founded and in 2006 it was acquired by Google for what many at the time thought was an exorbitantly high price. I wasn’t smart enough to found a personalized streaming video service in 2005, but it was clear to some that there was a market for low-quality, highly personalized video streaming. YouTube became the home of much long tail video content: esoteric videos that could never attract enough interest to be commercially viable on a cable TV channel (including one of my favorite categories, home repairs). Small-scale sporting events also started streaming video on the Internet. Netflix came along, and although there were many initial complaints about buffering and poor quality, it proved that a mainstream streaming service could be popular and financially successful.

The final, and technically hardest, video service to offer over the Internet is a mass market real-time streaming service featuring the most popular channels, including sports, news, and the major networks. My move to Arizona offered the perfect opportunity to see if the cable and satellite TV cord could be cut once and for all.

There are several such services available, and for now I am trying YouTube TV. So far I’m very impressed with it. Most of the time the picture quality exceeds DirecTV’s: it is a definite step up in quality. Occasionally the frame rate appears to slow down and the picture stutters ever so slightly, but it recovers quickly. There is a significant delay (perhaps 15 to 30 seconds) from real-time, but this is not an issue except when communicating with someone else watching the same event on another video service. Ditching the set top box, and the fees associated with it, is great. 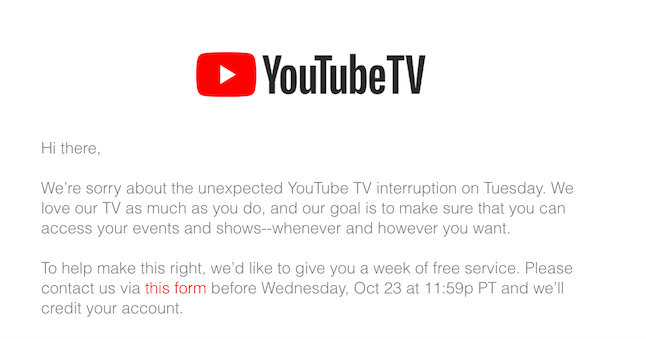 YouTube TV, and all of YouTube, did experience a major outage this month, proving again that streaming video streams to millions of devices is not easy. Google, to its credit, did proactively offer a week’s credit on the service.

The picture quality is better, the price is lower, and between YouTube TV, Netflix, Amazon Prime Video, YouTube, and other streaming services, I’ve got access to plenty of content. I’m happy to have finally cut the video cord, years after cutting the phone cord.

Related post: Ruminations on the causes of bad software