tl;dr: I feel much safer in the air than on the ground, even after once experiencing a harrowing flight...

I’ve flown a lot for business. I’m actually one of those rare (I think) individuals that truly feels safer in an airplane than in a car, even if I’m driving. It might be my left brain-dominant mode of thinking. I know how airplanes fly, I know why they take off into the wind instead of with the wind (unlike kites, airplanes do not use the wind to get blown up into the sky), I know how the Bernoulli Principle works, and I’m happy to have a team of trained, licensed professionals handling the machinery instead of me.

When I look out the window in flight, I see no other obstacles to avoid or other moving objects, except (rarely) another plane traveling at great relative speed at a different altitude. I truly feel safe. In a car, I see many other objects to avoid, many of them moving not too far away from me. I see other drivers doing crazy maneuvers, not paying attention to the road, and (more and more these days) staring at their cellphones. I do not feel safe. It is no surprise that fully automated flight technology has been around for decades, whereas automated driving technology is still under development.

Even so, I have had my share of flight abnormalities. Aborted landings happen every now and then. Well into the descent, with the ground approaching, the pilot will suddenly gun the engines back to maximum thrust and pull up, often without much of an explanation to the passengers. Maybe the pilot didn’t like how the plane was lining up with the runway, or maybe the pilot saw something on the ground that needed to be avoided. Usually it just means a ten minute delay as the plane circles back to the landing approach and tries again. 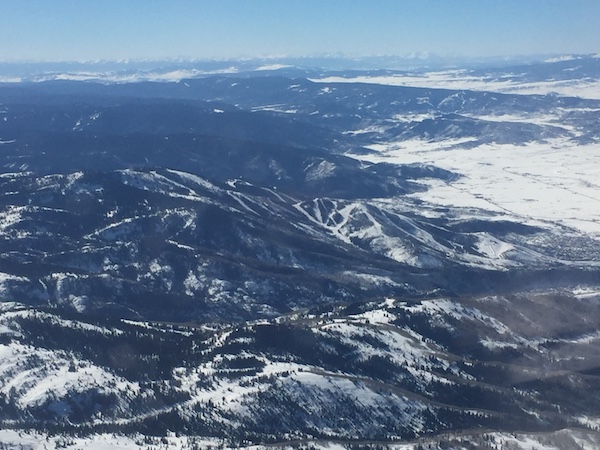 Aborted takeoffs are rarer than aborted landings, but scarier if you give it some thought: the most dangerous part of the flight is the takeoff and initial climb, where engine power is needed the most. I’ve only experienced one aborted takeoff, on a United-branded short haul turbo prop flight from Columbus, Ohio (CMH) to Chicago. We started at the far end of the runway as per usual, the pilot turned the propellers up to maximum thrust, we started moving and gaining speed, but before we had gained enough speed to get into the air, the pilot cut off the engines. As we left the runway for a taxiway to head back towards the airport, he got on the intercom and announced that he had seen something he didn’t like on one of the indicators on the instrument panel. This raised more questions than it answered in my mind, but instead of heading back to the airport, he returned to the end of the runway and gave it a second try. The second attempt to get airborne was a repeat of the first, but this attempt convinced him to head back to the airport to have the plane checked out. It was the last flight of the day from Columbus to Chicago, so I was stuck in Columbus.

Columbus wasn’t the worst place to be stranded for an extra day. Huntsville, Alabama (HSV) was worse and had me computing what it would cost and how long it would take to rent a car to drive to Atlanta (ATL), a city with more than a single flight per day to Chicago. My all-time worst delay was in Regina, Saskatchewan in February during a period of extreme cold, the only time in my life I’ve experienced an air temperature of -40, which is the same on both the Celsius and Fahrenheit scales. I was on the once-a-day United flight to Chicago, and because the plane had spent the entire night parked at the Regina Airport (YQR) in the extreme cold, the mechanics were unable to get it started that morning due to a fuel line problem. The flight was full, as were the few other flights out of Regina that day to other destinations, and because the next day’s Chicago flight was also fully booked, United was unsure of when they would ever be able to get us out of Regina. That time I did decide to rent a car, and drove five hours across the frozen tundra of Canada to get to Winnipeg, Manitoba (YMG), which is an adventure that deserves its own blog post.

My worst flight ever, and my one true white knuckle flying experience, was in the mid 1990s on a United flight from Chicago to Syracuse, New York (SYR). At the time I was VP Engineering of ADC Kentrox in Portland, Oregon, and was headed to Ithaca, New York to do some on-campus recruiting at my alma mater, Cornell, in mid-November. Ithaca is a small, idyllic town in Central New York with a tiny airport (ITH) that, at the time, only offered short haul commercial service to New York City. There were no non-stop flights from Portland to New York City, so the best way to get to Ithaca with two hops instead of three was Portland to Syracuse via Chicago on United, and then renting a car in Syracuse to drive to Ithaca, a one-hour drive in good conditions.

Each side of every row had above-head backlit signs for “FASTEN SEAT BELTS” and “NO SMOKING”; I can’t remember whether the attendant call button said “STEWARDESS” or something a bit less gender-stereotyped. I hadn’t seen signs like that for years; that trip was indeed the last time I ever saw an airplane without icon signage. I reasoned that United had decided to use one of their older jets on the route, which was surely one of the most lightly traveled in their network and least likely to be carrying VIPs. At least I was on a jet. A very large woman took her seat behind me; I was glad she was not sitting next to me.

My third sign that something might go wrong was after the initial descent into Syracuse, when the pilot got on the intercom to give us a weather update and to tell us that there would likely be some turbulence on the landing, a very typical announcement. In his weather report, however, he said it was currently 60 degrees in Syracuse. “Hmmm,” I said to myself, “there was snow on the ground in Chicago, so there must be a strong cold front somewhere between Chicago and Syracuse”. There was, as it turned out: we were landing right at the very edge of it. 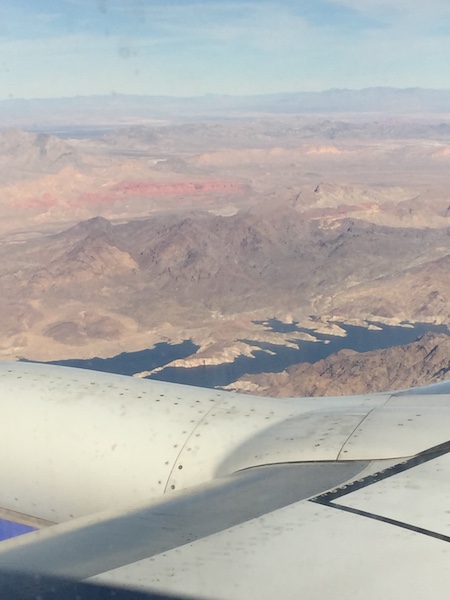 Lake Mead on the approach into Las Vegas (LAS)

The lower we got, the more turbulent it was. This was much worse than normal turbulence: there were a couple of times where the plane hit a pocket of air and it felt like we were falling straight down. Some people screamed. Stuff that wasn’t fastened down flew up to the ceiling. Looking out the window I could see snow whipping by. I was a bit worried, especially considering the age of the plane. I knew that the odds of surviving any sort of crash are minimal, but I pictured my death coming from being squished by the very large woman behind me, who was one of the loudest screamers. Even with the severe turbulence and the screaming passengers, the pilot kept descending until, finally, he aborted the landing and pulled up.

I figured he was going to give up and fly on to Albany (ALB) ahead of the storm, in which case we’d be bussed back to Syracuse, an outcome with which I would have been very satisfied. But no, he got on the intercom and announced that the winds had shifted and he was going to try landing on a different runway. At this point I was envisioning not a well-defined cold front but some sort of circulating storm like a tornado or hurricane which was centered over the airport. This pilot was going to fly us right into the center of the storm again.

The second descent was just as bad as the first. What is the definition of insanity? More big drops, more screaming, more stuff flying about the cabin, more snow whipping by the windows. However, as proven by the fact that I am still alive twenty years later and writing this post, the pilot did stick the landing. I’ve seen videos of planes landing in windy conditions, and I cringe to think what our landing must have looked like from the ground.

I don’t recall any applause for the pilot; I think people were too shell-shocked, and slow in coming to the realization that we hadn’t all died. We disembarked and once in the airport I called my wife to let her know that, in case she turned on the news and saw a report about a plane crash in Syracuse, it wasn’t my flight. We chatted for around twenty minutes. The plane had discharged all the passengers with one exception: after my call was over, I saw the very large woman being helped off the plane by two attendants. She was still in shock. I then rented my car and drove two hours in heavy snow from Syracuse to Ithaca.

No other flight I’ve taken since has come anywhere close to being as rough as that flight. When I’m delayed, I don’t get upset: I’m happy the airline is paying attention to mechanical and weather-related issues. Even with that white knuckle flight experience, I still feel safer traveling by air than by car.