Focusing on focus, at the company level

tl;dr: The best output of the companies I’ve worked for has happened when they’ve been focused...

In my experience focus is the one quality, above all others, that is most important to both personal and business success.

Companies are groups of people working together. At the company level there’s no directly analogous concept to a person being “in the zone”, a mental state of unity with the task at hand in which high quality output flows apparently effortlessly. Small groups of people can collectively be in the zone, such as a quartet of jazz musicians in a jam session. The larger the number of people, the smaller the odds of this happening. However, for the types of focus that last for longer than just a few hours, focus is the same for individuals and companies.

Focus starts with choosing a task, direction, path, destination, end result, and/or goal to be achieved. At the company level, this falls within the realm of strategy. Choosing the right goal is important: it definitely helps to be in a good market. However execution is also important, and that where focus really comes into play.

The natural tendency in business is to say “yes” to customers. After all, customers are the lifeblood of a company, and (aside from investor-funded companies) provide all the money that comes into the company. How can a company survive and grow by saying “no” to customers? It basically means “no, we won’t take your money for doing what you want us to do; we’ll find something else to do that will hopefully bring in more money from someone else.” To cite the well-known aphorism, it would appear to be trading a bird in the hand for two in the bush.

The danger of saying “yes” more often than a company should is that the company takes on more work than it can do well, which lowers the overall quality of the output. It actually also lowers the quantity of output: having too many concurrent projects and tasks will force the individuals inside the company to spend time switching between different tasks. If the company is not simultaneously figuring out how to do work more efficiently, or hiring more employees to deal with the increased workload, the company will flounder.

Focus forces a company to say “no” to opportunities that do not contribute to the chosen goal. Any proposed task or project or product or new initiative that does not help achieve the goal becomes a distraction to be avoided or eliminated. Focus forces the company to do a few things really well, rather than trying to be everything to everybody. 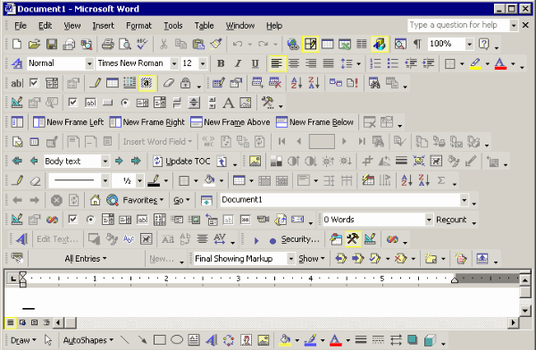 Can there ever be too many features?

Focus helps companies avoid “shiny ball syndrome”, which I’ve seen time and time again throughout my career. Something appears on the scene (a new potential customer, market opportunity, technology, business school buzzword) which seems more fruitful than what the company is currently working on, so resources are diverted to pursue it, undermining the current initiatives. Doing this too often can prevent the company from ever delivering on anything.

Focus also applies at the product level, when determining the feature set. While the concept of the Minimum Viable Product dictates a small, focused feature set in the initial release, the natural tendency is to lard a product up with features over time. Product managers often believe that every additional feature can only add more customers by increasing the range of uses for the product. Often when a product manager meets with potential customers and asks them whether they would buy a proposed product, the customer politely declines by saying “well, if it only had this feature I might”. So the product manager adds the requested feature to the next release, or the product roadmap.

Each additional feature, however, adds complexity to the product and often makes it harder for all customers to operate the product, by increasing the options and actions the user must consider. Each new feature can also slow the product’s performance and increase the odds of product failure. In the software realm, this can result in bloatware: software that has many features, but is difficult to use, slow, and crash-prone.

I’m not saying features should never be added to products, just like I am not recommending always saying “no” to customers. My main point is that by having a goal in mind, and focusing on achieving that goal, it can help make those decisions about when to say “yes” or “no” to a new feature proposal or customer opportunity. The most successful companies I’ve worked for, and the most successful products, have been the most focused.

See also: my thoughts on the importance of focus for an individual.