tl;dr: Not everyone in Illinois is being punished by the state’s high property taxes...

Part One: Death by property taxes in Illinois

Illinois has a well-deserved reputation for corruption, which is one of the reasons Gallup polls of residents often rate it as the worst state to live in. At one point four of seven governors ended up in jail, including one while I lived in the state: Rod Blagojevich, who was caught on tape by the F.B.I. (n.b.) auctioning off the United States Senate seat vacated by Barack Obama upon election to the Presidency. The current and previous Illinois governors are both billionaires: my theory is that Illinois voters like billionaire governors because they figure they are already rich and hence won’t steal too much from the public till (although see below).

“Corruption” is a somewhat abstract term, but it has real impact on state residents, who are almost always the passive victims of the crimes committed by the state’s political leaders. Corruption causes some businesses making relocation or expansion decisions to shy away from Illinois, decreasing the number of jobs and opportunities available to state residents. Corruption keeps talent away from the state, or causes it to flee. With Illinois property owners laboring under some of the highest property tax rates in the country, corruption in the property tax system shifts the tax burden away from the “winners” who know how to work the corrupt system and onto the “losers”, the members of the general public. Here are the major property tax scams that I saw while I lived in Illinois: 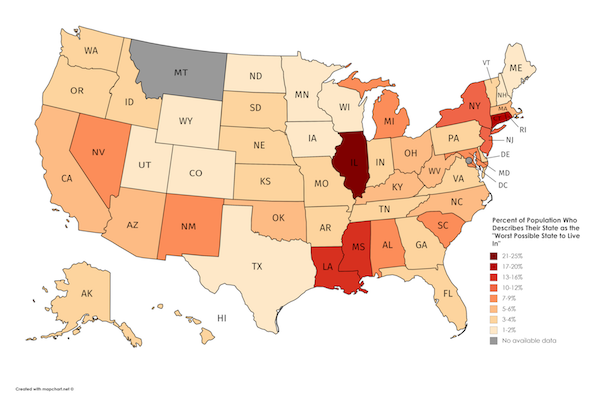 The worst state to live in, as voted by in-state residents: Illinois

If you’re the richest man in the world, Jeff Bezos, and you want to potentially open up a new location in Chicago, you don’t just show up and start paying the same property tax rate as the general public or the sandwich shop on the corner. You conduct a competition and get municipalities across the country to bid against each other to offer you a lower tax rate than the poor chumps who can’t do this. According to the Chicago Tribune Illinois and Chicago politicians threw incentives totaling $2 Billion at Bezos, but, as I predicted, it wasn’t enough. New York was one of the two winners until a popular revolt over the unfairness of this practice.

Amazon is far from the first or only company to attempt this scam. Even large companies that are already in Chicago can play it by threatening to leave. Besides being a blatant case of politicians picking winners and losers, this scam shifts the property tax burden away from big businesses and onto smaller business and residents.

I enjoy telling this story to folks from outside Illinois because they can’t believe the person who ran this well-publicized scam was subsequently elected governor.

J.B. Pritzker, who inherited billions from his wealthy father, the founder of the Hyatt Hotel chain, for decades has been a major financial force behind the Illinois Democratic Party. With money comes influence, and Pritzker has been helping decide which politicians the Party backs. He was caught on tape by the F.B.I. discussing with Rod Blagojevich which African-American might be an acceptable replacement as U.S. Senator for Obama.

Pritzker’s property tax scam is not something the average citizen can attempt, as it started with Pritzker buying a mansion which was going to take a long time to refurbish. To reduce his property taxes during the multiyear project he had the toilets removed to make the property “uninhabitable” and notified his fellow Democrat, Cook County Party Chairman and Assessor Joseph Berrios, who obliged with a retroactive property tax reduction of over $330,000. Then, after a quick inspection, the first floor toilet was reinstalled for J.B.’s use. The Cook County Inspector General investigated after media reports broke and declared it a “scheme to defraud”. Pritzker paid back the ill-gotten gains and was then elected governor.

When a billionaire several times over like J.B. Pritzker conducts a scam such as this, it indicates that he feels property taxes are too high, even for billionaires such as himself. But by cheating on his taxes, he shifted the property tax burden onto the more honest citizens of Illinois.

Illinois property tax cheaters span the entire political spectrum. A prominent Democrat, former U.S. Representative Luis Gutiérrez, and a prominent Republican, current Republican National Committee finance chairman Todd Ricketts, both got caught by reporters at the Tribune pulling this scam. How can you do the same? Buy a property with an old house, or better yet a vacant lot, replace it with a new house, and fudge the paperwork to continue paying taxes on the assessed value of the former state of the property. If you ever get caught, claim ignorance and clerical errors.

It's hard to determine which of these two cases is more egregious. Gutiérrez paid only $274.42/year on a house he bought for $340,000, while his neighbor with a nearly identical house paid $5,000, because Gutiérrez's property was on the rolls as a vacant lot. Anyone paying only $274.42 in property taxes in the city of Chicago must know there's an error, especially someone who was the former chairman of the Chicago City Council’s Committee on Real Estate, as Gutiérrez was.

Ricketts, on the other hand, tore down an old house and built a much larger replacement, and somehow continued paying taxes based on the value of the old house. Three years after building the new house he appealed his already artificially low property taxes, and his attorney sent the appeals board photographs of the long-demolished house. So Ricketts, also a part-owner of the Chicago Cubs, took action to perpetuate the scam, whereas Gutiérrez may have just remained silent. Both blame everyone but themselves.

Illinois law provides a small property tax break, called the General Homestead Exemption, on the "principal dwelling place" of an Illinois property owner. This scam is only available to people wealthy enough to own more than one property. One way to pull off this scam is to start with owning a single Illinois residence and, correctly, claim the exemption. Then buy a second property and also claim that new property is your primary residence. Since property tax rolls are kept on a countwide basis, the scam works best when the two properties are in different Illinois counties.

One person who pulled off this scam for several years before being caught is City Corporation Counsel Mark Flessner, the city's top attorney and former treasurer of the mayor's primary campaign fund, Lightfoot for Chicago. Flessner owned a family home in Naperville, which is in DuPage County, and bought a condo in Chicago, which is in Cook County, and claimed both as his primary residence for property tax purposes. After being caught, it appears the only punishment he will face, like J.B. Pritzker, is truing up his prior property tax payments. Chicago Mayor Lori Lightfoot, who campaigned as an anti-corruption reformer, did fire someone over this incident: the City Hall spokesman who raised the residency issue with the press.

If you’re a business, you’ve got another option besides the relocation scam to lower your property tax bill: you can contest it with the assessor by hiring an attorney who also happens to be a politician with significant clout. These tax attorney/politicians personally benefit from higher property tax rates because it increases the amount of business for their law practices: their financial self-interest is diametrically opposed to that of taxpayers. Unlike at the federal level, where there are restrictions on ex-politicians lobbying their former colleagues on behalf of clients, there are no such restrictions in Illinois on active politicians representing clients in front of colleagues, including colleagues subordinate to them in the Party structure. What would appear to be influence peddling and a conflict-of-interest is “the best of both worlds”, according to one of the chief practitioners of this scam, Ed Burke, who has been a Chicago alderman since 1969 (no, that is not a typo).

This wasn’t Ed Burke’s only scam, however: he was recorded by the F.B.I. (n.b.) attempting to shake down Burger King over a driveway permit. As a condition of his bond he had to turn in the 23 guns he kept in his government office. What was the voters’ response after this all became public? Naturally, this being Illinois, he was re-elected, allowing him to continue profiting from Illinois’ property tax system at the expense of the taxpayers. 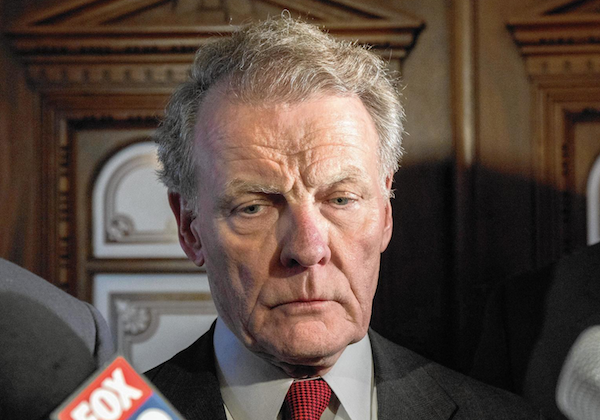 Who is the most powerful politician in the State of Illinois? Governors come and governors go (often to jail), but who really runs the state? Illinois is pretty much a single-party state, as was the old Soviet Union. Just like in the Soviet Union the most powerful person is not the head of the legislature, or the person who holds the title of President or Prime Minister or Governor: it is the head of the party, or Party Chairman. The Party Chairman has outsized influence not just on the legislative agenda, but more importantly on personnel decisions and all the favors granted to both party insiders and supplicants.

The Illinois Democratic Party Chairman since 1998 is Boss Michael Madigan. Boss Madigan was first elected to the Illinois House of Representatives in 1970 (not, that is not a typo) and has been Speaker since 1983, except for two years when the Republicans were briefly in the majority.

Like Ed Burke, Boss Madigan profits from the property tax system by running the property tax attorney/politician scam. Madigan, however, runs it on a whole other level. If you’re a business looking to pay less in property taxes, why would you hire Ed Burke when you can hire the most powerful politician in the state? What do you suppose happens when a letter from Boss Madigan’s law firm pleading for a client’s tax reduction shows up on the desk of the Democratic Cook County Assessor whom Boss Madigan helped select and whose campaign Boss Madigan’s party machine funded?

To make himself even more untouchable, in 2002 Boss Madigan orchestrated his then 36 year-old daughter Lisa’s election as state Attorney General, a position she held until just recently. With most of the state’s politicians beholden to him, Boss Madigan need only fear federal investigation and prosecution. He was recently caught on a recording when the F.B.I. brought down Chicago alderman Danny Solis, but so far apparently hasn’t said anything incriminating enough to cause the feds to file charges. There is little need for him to say much, given the unspoken power and influence he wields.

A property tax cheat as governor. A property tax profiteer as state Party Chairman. It’s hard to see how the property tax situation in Illinois can improve with these politicians in charge.