tl;dr: Using online marketplaces on both ends of a move can reduce your hauling costs significantly...

The process of moving isn’t fun. When I was in my college days I moved often for work and school, almost always by packing, transporting, and unpacking everything myself. I came up with my ideal method for moving: burn everything down in the old place, to get the visceral thrill of a purging bonfire, journey to the new place and buy all new stuff. Someday I wanted to be rich enough to be able to do this.

Alas, that goal still seems out of reach. Over the intervening years, however, another way of moving has arisen which can dramatically reduce the amount of physical stuff that needs to be hauled from the old place to the new place.

Step One is to downsize as much as possible, by getting rid of possessions that aren’t going to be a significant part of your life in the future. This is the process I was undergoing last summer, in preparation for the move to Arizona. Besides reducing the amount of stuff to be moved, I found it to be a wonderfully purifying and freeing exercise. I am still getting rid of stuff that we did haul to Arizona, but which is still unlikely to be used in the future. Craigslist, Goodwill, other charities, and friends are great ways to dispose of stuff that can benefit others.

Step Two is to take a harder look at the stuff you will use in the new place, such as furniture, and decide if it is worth the cost of transporting it. You’d be surprised at how little used furniture goes for on marketplaces such as Craigslist. The low market value means that it might cost more to transport it than it is actually worth, or the transport costs could be a significant fraction of what it’s worth. You may be better off by selling your furniture in your old location, and buying equivalent used furniture in the new location, or some new items if you want to upgrade. 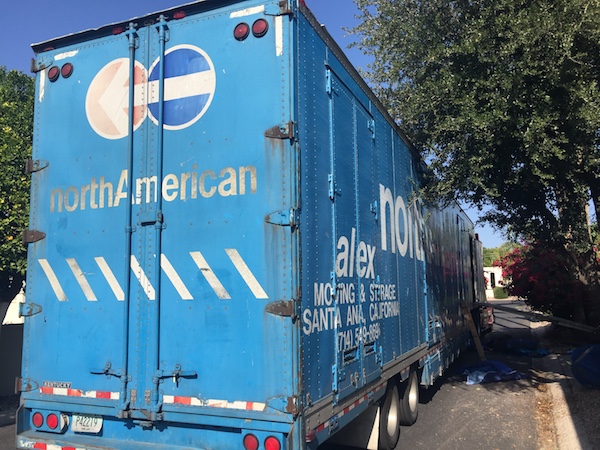 Unlike our move to Chicagoland, the move to Arizona needed just the front part of a trailer

So as the move got closer I became more aggressive in what I sold and gave away. I got rid of all the bulky items in our basement by pricing them very aggressively on Craigslist while fully disclosing that I expected the buyers to remove and haul the items away themselves. We had a huge air hockey table that, when it was delivered new, barely made it down the narrow stairs with a 90 degree turn at the bottom and into the basement. I knew it was going to be nearly impossible to get it out. I priced it really low and got an eager buyer, a dad with two teenage kids. They were less convinced that they had gotten a steal after they finally managed to get it upstairs. I sold my stationary bike, with its heavy flywheel and steel frame, for a pittance to two muscular women, who overcame gravity and the confined stairway to get it out of the basement.

Step Three, when you get to your new place, is to switch from a seller to a buyer on Craigslist. All those lowball prices you were getting as a seller in your old location now work to your advantage as a buyer in your new location. If you are a little patient and able to jump on new bargain-priced listings when they appear, you can pick up some great deals. Often these bargains are being offered by people like you used to be: folks about to move who are just trying to get rid of stuff quickly instead of burdening themselves with the cost and hassle of moving it.

This isn’t quite the ideal move I thought up in my youthful years, as there is no bonfire involved, but it’s a practical substitute. To minimize moving costs and hassles, sell your non-sentimental items on online marketplaces in your old location, transport yourself and your sales proceeds to the new location, and then use the online marketplaces to buy equivalent replacements.