Book review: One More Time: the Best of Mike Royko, by Mike Royko

tl;dr: A collection of the best posts by the latter 20th century’s most popular blogger...

One More Time is going to appeal, quite naturally, to those who, like myself, enjoyed reading Mike Royko’s newspaper columns back in the day. I would argue, however, that this collection of his work should also appeal to those students, writers, journalists, and bloggers who want to see how an author can successfully engage with a huge, widespread national audience that spans the spectrums and divisions that so often define us in the present era.

There’s no writer of Royko’s stature left anymore. Much commentary these days is written for one side or the other of the red/blue divide in this country. Those few writers who seek to span the political divide do so by treading carefully in an attempt to avoid upsetting anyone. The result is boring, milquetoast writing that lacks the passion necessary to be considered great.

Royko was the antithesis of a milquetoast. As this collection proves, his writing was clear, direct, and always made a point. He aimed his pen at everyone and anyone he felt like, and ended up upsetting everyone at one time or another. He had a habit of, when irate readers would call him to complain about a column, offering to refund them the 25 cents they had spent on that day’s edition of the newspaper.

Royko was a champion of the working class that he rose from, and the downtrodden. He was a lifelong Democrat, but that didn’t inhibit him at all from criticizing the pervasive corruption he encountered in the Illinois Democratic Party and the city of Chicago bureaucracy. As a beat reporter he had first hand exposure to how politics was conducted in Chicago and Illinois at all levels, from the party boss on down. 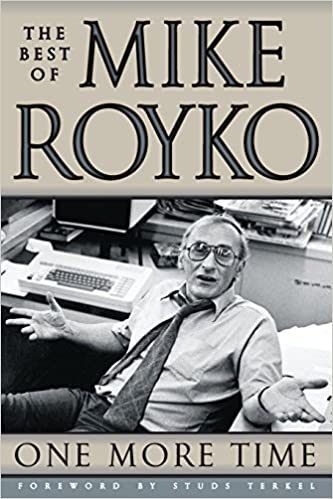 In one memorable column in this collection, “Bucking Hard for the Equal Rights Amendment”, he actually lists the dollar amounts that ERA supporters could have chosen to pay to buy Illinois politicians’ votes. Chicago aldermen received much ridicule from Royko for their corruption, and even though Royko died in 1997, the FBI is still trying to bring some of Royko’s targets to justice. Alderman Ed Burke is described by Royko as being part of an “evil cabal” in a column published on April 4, 1979, and the FBI is still trying to bring Burke down in 2020, as I mentioned in my post on Illinois property tax scams.

The other secret to Royko’s success was his writing style. He can be (and is, as he mentions in a column in the book) compared to Ernest Hemingway. Both Hemingway and Royko use simple words and short sentences; neither will impress anyone with the breadth of the vocabulary they use. More so than Hemingway, Royko used humor, irony, mockery, and satire to get his points across in an entertaining fashion. But, as several columns in this volume prove, he could also tug on the reader’s heartstrings when writing on topics such as love, marriage, and family.

Royko was always based in Chicago, but his column was widely syndicated in newspapers across the country. I remember reading him first in The Knickerbocker News, the afternoon paper in the Albany, New York area when I was a kid. Like Royko’s first well-known employer, the afternoon Chicago Daily News, afternoon newspapers were the first to go under as news consumption habits shifted, first due to the rise of television newscasts and 24-hour news networks, and then due to the Internet. Royko moved on to the Chicago Sun Times and then the Chicago Tribune.

For those who are too young to remember any of this:

Even if a Mike Royko were to appear on the scene at this point in the 21st century, I’m not sure how that person would achieve the same level of popularity as Royko. Still, there are lessons to be learned today from how Mike Royko was able to communicate with others through his writing.