I sold my bonds

tl;dr: What a great time to be selling U.S. dollar-denominated bonds!...

I sold my bonds, except for a few small ones to fund some upcoming planned expenditures. It’s a fantastic time to be selling bonds, literally the best time in my entire lifetime. The COVID-19 pandemic has brought much hardship to the world, but for sellers of bonds, these are the best of times. I must give thanks to where it is due: thank you, Federal Reserve!

Some background: I am an investor, chiefly of my retirement nest egg, but not an active investor. I am what is known as a “buy and hold” investor, which is the opposite of a day trader. I don’t have the time or the inclination to monitor the market on a daily basis. I haven’t watched CNBC in years. I do read the Wall Street Journal and a few other sources of financial news. I completed an executive education program at the Harvard Business School, so I know a few things about corporate finance. I take an occasional sidelong glance at the market, just to see where the long term trends may be headed. I’m mainly on the lookout for bubbles that may necessitate a shift in my long term investments. As I wrote in my Three Bubbles post at the end of 2019, I’ve lived through two major bubbles so far, the late 1990s-2000 dotcom bubble and the 2008 real estate bubble, and I’ve been fearing a third, even larger bubble: a government-issued debt bubble.

Earlier in my career I was fully invested in the stock market and couldn’t imagine owning a bond. But sure enough, as the decades went on, I naturally became a bit more conservative in my personal wealth management and started putting some money in bonds. Up until just recently I had never sold a bond, which should prove that I am anything but a bond trader. I would buy the bond, hold it until maturity, collect interest along the way or in one lump sum at the end, and then use the proceeds to perhaps buy another bond.

Here is what the bond market has done over the course of my entire investing lifetime, based on the longest term, most conservative bond issued in this country, the 30-year U.S. Treasury: 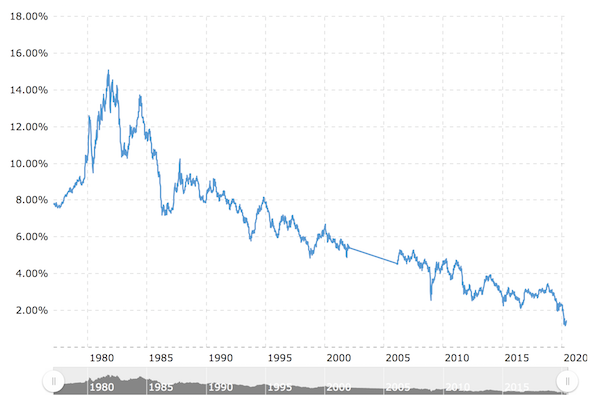 Do you notice a trend? We’ve basically been in a nearly 40-year bull market for bonds (note: bond prices rise as yields fall - they are exactly inversely correlated). So buying and holding bonds has been a winning strategy for nearly 40 years.

An amazing thing happens when you sell a bond today that you bought a while ago when bond yields were higher. If you have six more months to go until maturity, you don’t miss out on six months of interest at the original yield. Your bond is competing in the bond market with newly issued short-term bonds that yield almost nothing, because the Fed has set short term interest rates at zero. So you get back your principal plus almost all of the remaining interest you would have earned by holding the bond until maturity. It is immediately credited to your account. It’s like the Fed has waved a magic wand and is just handing you almost all of your money, today.

I don’t see how the bond market can go much higher than where it is today, because that would mean bond yields and interest rates would have to go lower, to zero or below. According to the site I got that graph from, as of May 28, 2020 the 30-year Treasury yields just 1.47%. According to my Wall Street Journal iPhone app, the 10-year U.S. Treasury yields just 0.666%, and the German 10-year bond actually has a negative yield. I think we’ve reached the end of the nearly 40-year bond bull market. 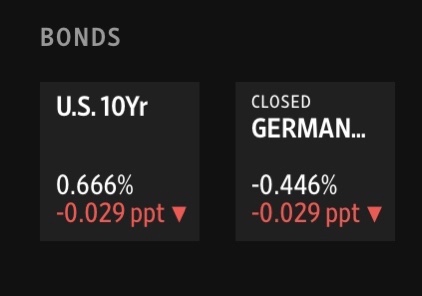 The enemy of investment-grade bonds is inflation. I have no doubt that, if someone buys a 30-year U.S. Treasury today, thirty years from now the U.S. Treasury will give back the dollars invested plus dollars equal to 30 years of interest at 1.47%. The real question is what will those dollars be worth? Will a dollar in 2050 really buy nearly what a dollar buys in 2020? That’s what you’re betting on when you buy a bond in today’s market.

This is where my view diverges from the majority, including that of Nobel Prize-winning economist Paul Krugman, who doesn’t think the pandemic-induced recession will be as bad as the “Great Recession” after the real estate bubble burst. Another disclaimer: I do not have a Nobel Prize in economics.

I see many inflationary pressures as a result of the COVID-19 pandemic. The Federal Reserve and the federal government are working together to create huge amounts of money. The federal budget deficit this year will be the largest in decades. The Federal Reserve is making unprecedented moves into the bond market, buying up trillions of dollars of assets. There is pressure to do even more, to send money to state and local governments that won’t be able to pay back their own bondholders without drastic budget cuts. Meanwhile, GDP will fall significantly this year, so we’ll have more money chasing fewer goods.

That money is getting into circulation. As I explained above, the Federal Reserve just effectively handed me a wad of cash by setting short term interest rates to zero. The federal government has given every adult $1,200, and unemployed people are getting an extra $600/week ($15/hour) on top of state unemployment benefits. This effectively sets a new floor on what the minimum wage needs to be to attract workers back to the workplace. Companies like Amazon, Walmart, Target and others have had to institute hazard pay or permanently raise their pay scales.

Perhaps even more importantly, the social distancing and other countermeasures necessitated by the pandemic may permanently lower the efficiency of producing goods and services. The primary reason so much manufacturing was moved to China over the past 20+ years was to make goods at a lower cost. If we as a nation decide to build more stuff in the United States again, it is going to cost more. Airline ticket prices initially plunged in the crisis because no one wanted to fly, but if the airlines have to remove seats in their coach cabins to attract people back into the air, they are going to have to raise ticket prices. I’m a big fan of all the additional cleaning that I see businesses doing, but that also raises costs.

If businesses like restaurants can’t serve as many people as before due to social distancing, their fixed costs get spread across fewer patrons and prices must rise. 9/11 ultimately didn’t introduce much new cost into businesses, just additional airport security, border security, and immigration costs, but the steps needed to adapt to this virus may introduce a lot of new cost into the economy. That means prices must rise, and a McDonald’s cheeseburger in 2021 or 2050 will cost more than a McDonald’s cheeseburger did in 2019. That’s inflation.

If we don’t achieve Krugman’s optimistic recovery scenario, and we suffer through a period that more closely mimics the Great Depression, that’s also ultimately inflationary. A lot of people don’t understand what actually happened during the Great Depression, as it is taught in U.S. public high schools as a period of deflation. That was indeed true in the beginning of the Great Depression: prices fell. But in the 1930s the United States was on the gold standard. The federal government couldn’t do what it is doing today by printing a bunch of money, because anyone who wanted to could exchange that money for gold, and the government only had a finite amount of gold. It took a while, but in 1933 Franklin Delano Roosevelt effectively seized everyone’s gold and, once that was done, in 1934 the exchange rate for an ounce of gold was changed from $20.67 to $35.00. This devalued the currency (by almost 70%!), which is exactly what inflation is.

I was a teenager in the 1980s, so I remember what it was like the last time that inflation was high in the United States. I’m not saying that inflation will zoom up to double digit percentages as it did back then. All I’m saying is that I think inflation is likely to be higher than 1.47%/year over the next 30 years, which means the money invested in a 30-year U.S. Treasury will almost certainly lose value. Bonds are not the place to be when there is inflation.

But maybe I’m completely wrong, and selling my bonds was a mistake.

Related post: Who would buy a negative yield bond?