tl;dr: Has there been inflation? Depends on how you measure it...

Is there a good five-cent cigar in the United States in 2020? The question seems preposterous. There’s hardly anything in this country that you can buy for five cents, let alone a cigar, let alone one that you would actually enjoy smoking. I posit that the only possible way to buy a cigar for five cents is to seek out a bum who might be able to offer you a cigar butt that’s been run over by a bus. Even then it is likely that the bum would insist upon at least a quarter for his troubles.

On the other hand, when Marshall made his oft-quoted comment, the U.S. was on the gold standard. The U.S. effectively had two currencies: the dollar was fully convertible into gold at a price of roughly $20 per ounce. In fact a cigar shop proprietor in a western frontier town back in Marshall’s timeframe would probably have preferred that a customer paid in gold rather than the flimsy paper issued by a federal government so remote it would take weeks to reach on train and horseback. Five cents was about 1/400th of an ounce of gold. At today’s price of gold (roughly $1,750 an ounce), 1/400th of an ounce is worth $4.38. I’m not a cigar smoker so I can’t be the ultimate judge of cigar quality, but I do note that a popular online retailer of cigars has a section of its website which claims to offer a choice of quality $3 cigars. 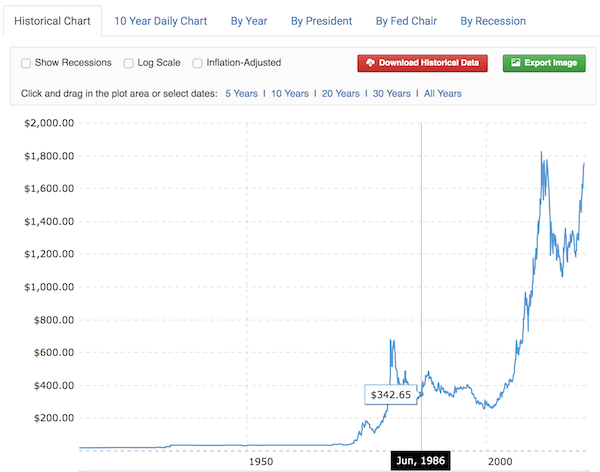 Price of an ounce of gold in $US, from Macrotrends; it's easy to see when the U.S. went off the gold standard

Have starting salaries for Cornell University Engineering graduates gone up or down since I graduated with a bachelor’s degree in 1986? Back then $30,000/year was the average starting salary. Today it is around $80,000/year, which means there has been wage inflation in dollar terms. Gold was $342.65/ounce when I graduated, so that starting salary was equivalent to a little over 87.5 ounces of gold, or 5 pounds 7.5 ounces of gold per year. At today’s price of gold, that’s over $153,000/year. The cost of hiring a Cornell engineer has gone down in gold terms since I graduated, which is deflation.

How has the stock market done so far in the twentieth century? In dollar terms, the venerable Dow Jones Industrial Average (DJIA) opened the century under 11,000 and got close to 30,000 before the pandemic. The current President and the previous President both brag about how the stock market has risen during their time in office, after bottoming out in 2009 during the Great Recession. Inflation, as measured by the Consumer Price Index (CPI), supposedly has been low during this timeframe. Yet gold has far outperformed the DJIA this century, meaning that the stock market has lost value when measured in the other currency the U.S. used up until the 1970s.

It’s even hard to measure inflation if you stick to one currency. On the surface it might seem simple: choose a basket of goods, obtain their prices at various points in time, and see how the overall price of the basket changes. But everyone’s basket of goods is different: if you don’t have kids that you plan to send to college, then you don’t care at all about what happens in the future to the price of college tuition.

The goods themselves also change over time, in both obvious and subtle ways. How should the basket of goods take into account cellphones and cellphone services, which didn’t exist a generation ago? Is the price of the average cellphone rising, because users are purchasing more expensive higher-end models than a decade ago, or is it falling because the computing power and features of a 2020 cellphone are so much greater than a 2010 cellphone and hence you get way more value for your money?

You can’t even directly compare the price of a gallon of gasoline from when I was a kid. Back then, the vast majority of gasoline sold was leaded gas, with very few additives, and it was pumped by a station attendant. Today it is almost entirely self service and the gas formulation is different. Is the gas better, because it harms the environment less, or is it worse, because it produces less power per gallon, which is the whole reason people buy gas in the first place? Government bureaucrats computing the most well-known inflation figure, the CPI, try to take these product changes into account via the hedonic adjustment. It’s an inexact science, to say the least.

Inflation eats away at savings, unless the savings are held in a store of value that can inflate in price along with other prices. Cigars degrade with time, but if Thomas R. Marshall had saved five cents worth of gold one hundred years ago, he’d still be able to buy a good cigar with it in 2020.