Finance during the pandemic

tl;dr: The traditional rules are being violated and the world is upside down, at least for now...

The COVID-19 pandemic-triggered turmoil in the economy and the financial markets has caused the U.S. government to intervene in both to a degree not seen since the Great Depression. This situation has me wondering what my old finance professor at the Harvard Business School (HBS), Thomas R. Piper, would say.

Prof. Piper was one of those professors whose thoughts and ideas stick with students, at least this one, even decades later. Prof. Piper was an ideal fit for the case study method used at HBS: he was a great storyteller. Some people imagine that a finance professor at HBS would teach students how to do cutting-edge financial engineering, so as to create complex financial structures that enrich the creators at the expense of the less sophisticated and the taxpayers, who may ultimately be asked to fund a bailout. The reality is much more mundane. Prof. Piper taught traditional, by-the-book, corporate finance: calculating companies’ Weighted Average Cost of Capital (WACC) to make decisions on debt versus equity financing, calculating return on invested capital to make project investment decisions, and valuing companies based on the present value of their future free cash flows, a methodology called Discounted Cash Flow (DCF) valuation. 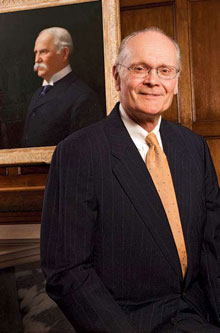 I attended HBS in the fall of 1997, not quite a year after Federal Reserve Chair Alan Greenspan made his famous remark about “irrational exuberance” as the stock market rose to new heights. DCF had already fallen out of favor among investors as a method for valuing the stock prices of high-flying, profitless (and in some cases revenueless) Internet companies. Prof. Piper led us through a few attempts to justify the valuation of some dotcom companies as a way of showing just how much the stock prices were based on the rosiest of possible future scenarios. I have to give Prof. Piper some credit for preserving my savings at the time: even though I worked in the Internet sector, Prof. Piper helped me recognize how overvalued the Internet companies were, and I never got caught up in the tech stock mania of the late 1990s. It took a couple more years, but eventually it all came crashing back down to earth. Prof. Piper and DCF were right, in the long run.

Prof. Piper armed me with another tool I used in my professional life: he observed that, when someone calls a project “strategic” and asks for funding, what they also are admitting is that it doesn’t make money. If the project did stand a good chance of making money, then the project proponent would lead with that statement and the financial return, rather than strategy, would become the primary justification for funding the project. Hopefully you can see by now that Prof. Piper was a strict disciplinarian when it came to corporate financial matters.

A habit of Prof. Piper’s, he told us, was checking the yield on the 10-year U.S. Treasury bond in the Wall Street Journal each morning over breakfast. Why did Prof. Piper do this? A U.S. Treasury bond is believed by many to represent the lowest-risk investment on earth. The U.S. is the world’s dominant superpower and is highly likely to be around to pay back the principal on the bond when it matures; and as MMT teaches, the U.S. can always just print more dollars to pay off its bonds, as long as minor inconveniences like the debt ceiling are sidestepped. Ten years is a typical business investment time horizon. So every single business investment made by every company in the economy needs to return more money than a 10-year U.S. Treasury does; else, you should just buy a U.S. Treasury bond with the money instead of investing it in the business. Riskier businesses and investments need to return much more than the U.S. Treasury when they succeed, since more of them will fail. The U.S. Treasury risk-free return rate (yield) is a critical component of the WACC calculation. As the U.S. Treasury yield rises, times become tougher for businesses: they should fund only the projects most likely to return the highest levels of profit. As the risk free (U.S. Treasury) yield falls, it’s a signal that businesses should fund even the less-profitable ventures: businesses are encouraged to borrow and expand more rapidly. 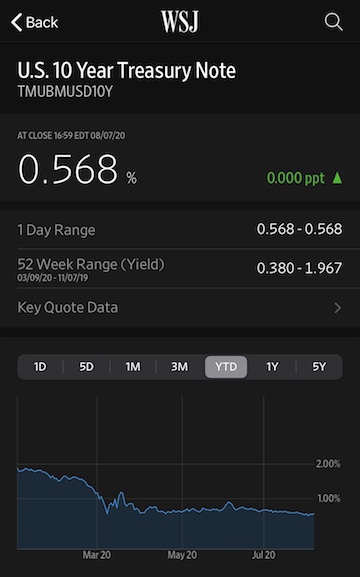 At least that’s how the capital markets, in a free-market capitalist system, are supposed to work. The problem now, in the midst of a pandemic, is that the U.S. government (Congress, the President, and the Federal Reserve) has intervened to such a great degree that the signals being sent by the market to businesses can’t be trusted, and in fact may be completely backwards. The Federal Reserve has pinned short-term interest rates at zero for the foreseeable future, and has purchased trillions of dollars worth of longer-term bonds, driving prices up and yields down. Trillions of unfunded fiscal spending approved by Congress and the President have injected even more money into the economy. The result is that the yield on the 10-year U.S. Treasury has fallen to new all-time lows. The NASDAQ stock market index is at an all-time high, and the S&P 500 index is very close to setting a new high. So the stock and bond markets are saying that now, in the midst of a pandemic and major recession, is a great time, perhaps the best ever, for businesses to invest and expand (or to retain their current operations).

I wonder what Prof. Piper would have to say about all this. I suspect he might dust off Alan Greenspan’s “irrational exuberance” quote and say that the government is desperately trying to engineer some exuberance. In reality they may just be trashing the U.S. dollar, by printing so many of them, and drawing out the inevitable restructuring of the economy that is necessary to adapt to a post-pandemic future. In the end, the time-proven rules of finance will prevail. Interest rates should be higher, and the stock market should be lower, during the pandemic.

For example, airlines need to contract; paying them to fly mostly-empty planes is just wasting resources. Business failure is a necessary part of the free-market system, as it allows the stronger, better-managed companies to survive and grow in the future. That’s happening in the retail sector, where online retailers like Amazon are growing and traditional brick-and-mortar retailers like Brooks Brothers, Neiman Marcus, and Lord & Taylor have declared bankruptcy, although the government has played a role there, too, by allowing Amazon to operate while closing “non-essential” retailers during the lockdown.

The government is so involved in running the economy these days that it is becoming harder to imagine what a free-market economy would actually look like. The President even appears to be engineering the sale of the U.S. portion of Chinese app TikTok to Microsoft, with the government getting a piece of the action. Maybe Harvard should adapt to this new reality by combining the Harvard Business School with the Harvard Kennedy School of Government. I wonder what Prof. Piper would have to say about that idea.