tl;dr: Since we’re all MMTers now, I decided to learn more about what MMT is...

The response to the COVID-19 pandemic by Congress and the Federal Reserve has been swift and dramatic, rendering Prof. Stephanie Kelton’s excellent primer on Modern Monetary Theory (MMT), The Deficit Myth, in need of a second edition even though it only hit the streets (and the New York Times bestseller list) twelve days ago.

That response is fully aligned with MMT thinking, even though few of our politicians will claim to be MMTers. One of the key tenets of MMT, which Prof. Kelton proves multiple ways, is that there is no fundamental limit on how many U.S. dollars the federal government can create out of thin air. Putting this tenet into action, Congress and the President have worked together to pass trillions of dollars of new spending which, among other things, sent almost all Americans over a thousand dollars and created (at least temporarily) federal unemployment payments of $600/week (or $15/hour for a 40-hour week) plus whatever a person’s state provides on top of that. Meanwhile the Federal Reserve has also pumped trillions of newly created dollars into the economy, re-inflating the bond and stock markets in the process (I took advantage of this to sell my bonds). The NASDAQ stock market index actually made a new all-time high this month, even though everyone agrees that we’re in the midst of a severe recession and unemployment is as high as it’s been since the Great Depression.

That response is why I say we’re all MMTers now. I put more weight on what people do than what they say. Prof. Kelton pays more attention to politicians' words than I do, and it bothered her tremendously, during a stint in D.C. in 2015, to hear politicians describe the federal budget as needing to have spending balanced by taxes plus borrowing, similar to the way a family’s budget must be balanced. Congress plays some elaborate games, which Prof. Kelton describes, to assess spending bills to make sure that they are offset by tax increases or other spending cuts, with the aim of keeping the government from spending too much money. Yet even with all these games and words, we were still running a $1 trillion dollar budget deficit pre-COVID, eleven years into the longest economic expansion cycle in history. Is anyone in D.C. truly a deficit hawk?

Even though I already knew that the federal government, ever since leaving the gold standard, could conjure as many dollars into existence as it desired, it was still fascinating to have Prof. Kelton describe the process in detail. I also give Prof. Kelton credit for answering a question that had baffled me: I could not understand how interest rates could be so low (close to zero in the U.S.) with so much money being created. Wouldn’t bond buyers, fearing inflation, be unwilling to lock up their money for years or decades at near-zero rates of interest, in which case inflation could clobber the real returns on the bonds? Prof. Kelton has a great analogy in which currency dollars are green dollars and bonds are yellow dollars: the Fed prints the green dollars and then gives recipients a choice of trading them in for yellow dollars that pay a little interest. Since the green dollars and yellow dollars balance, and the Federal Reserve sets the interest rates, the low interest rates can continue no matter how much money is created.

Prof. Kelton also demonstrates that the federal debt will never be paid off, and there is no need to pay it down or off. Social Security can also be fully funded forever if a simple legal restriction is changed. The answer to all these situations, according to MMT, is the same: just create more money to fulfill all the expenditures authorized by Congress. 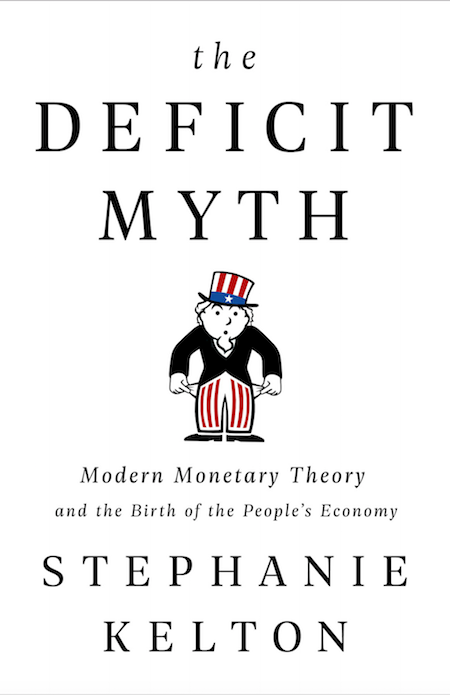 The risk of all this money creation, as Prof. Kelton warns throughout The Deficit Myth, is inflation. As flawed as are the deficit myths practiced in D.C., even Prof. Kelton concedes that “it might feel like the myths are there to protect us from politicians who would otherwise spend too much and tax too little; there may be some truth to that”. How does MMT improve upon that situation? “More than any other economic approach, MMT places inflation at the center of the debate over spending limits.”

Unfortunately, The Deficit Myth does not describe how MMT will evaluate Congressional spending proposals to determine if they create too much inflation. Perhaps Prof. Kelton needs to write a follow-up book to The Deficit Myth, titled The Inflation Reality. All I found was a statement that “we want agencies like the CBO (note: Congressional Budget Office) helping to evaluate new legislation for potential inflation risk before Congress commits to funding new programs so that the risks can be mitigated preemptively” (emphasis in original). The problem is that Prof. Kelton also claims “as former Fed governor Daniel Tarullo confessed, the Fed has no reliable theory of inflation guiding its day-to-day decision-making.” So the Fed doesn’t know how to predict inflation but the CBO does?

Inflation is notoriously insidious, hard to predict, and even hard to measure. It’s not directly correlated, either positively or negatively, with the unemployment rate. I grew up in the stagflation 1970s, when the U.S. suffered both high unemployment and high inflation. Ronald Reagan popularized the misery index, which just adds the two percentages together, and rode it all the way to the White House and then a resounding reelection victory when he managed to reduce it. I can remember when gold was $35 an ounce, its price when the U.S. severed ties with the gold standard, an event that Prof. Kelton applauds. It closed last week at around $1750 an ounce, which is 4,900% inflation in fewer than fifty years.

I smile bemusedly when people in academia claim that there is little overall inflation in the U.S. Prof. Kelton teaches at Stony Brook University, which a quick Internet search reveals has raised the costs for undergraduates to attend by over 60% in the last ten years. Prof. Kelton is actually well aware of rising education costs. It’s one of the areas of the economy highlighted in the chapter entitled “The Deficits That Matter”, along with two other inflationary sectors of the economy: healthcare and infrastructure. An aside on infrastructure: I grew up in upstate New York when Syracuse University built an indoor 50,000 seat stadium, the Carrier Dome, for a little over $25 million. Now it costs well over a billion dollars to build a mile of subway in New York City. As someone who has worked his entire career in a deflationary industry (computers and networking), where the cost of storing a byte or transporting it from New York to L.A. has plummeted over the decades thanks to Moore’s Law, fiber optics, and other technological advances, I’ve watched my industry deliver miracles while other industries continually do less with more.

So as much as Prof. Kelton claims to be focused on inflation, I’m skeptical. Her number one MMT policy proposal is a federal job guarantee for everyone who wants a job. Will this be inflationary?

Prof. Kelton estimates that the program might end up with “the equivalent of twelve million full-time workers,” who also receive healthcare and paid leave benefits. But what about a defined-benefit pension program, which Prof. Kelton speaks so highly of elsewhere in the book? Prof. Kelton also speaks positively of the ability of unions to improve pay and benefits for workers. It’s not much of a stretch to imagine one of the existing government employee unions stepping in, unionizing the 12 million workers, and demanding higher pay and a pension plan on par with that of other government workers.

Prof. Kelton’s heart is in the right place. I’d also love for McDonald’s workers to get $25/hour. The challenge is to drive hourly pay from $12 to $25 without the purchasing power of $25 declining to what $12 buys today.

The Deficit Myth is written in an engaging style, without dense academic language. All the terms used should be familiar to readers of business journalism. If you want to learn more about MMT, which is the way we are managing our economy (at least initially) in the COVID-19 world, I highly recommend The Deficit Myth.