How I both worked for and helped acquire Kentrox, or appear to have

tl;dr: It looked to some like a futile attempt to relive the good-old-days, but actually it was just branding...

I was hired as a mid-level design engineer by Kentrox in 1991; this was my entrée into developing products, software, and systems for the Internet. At that point the company was known as “ADC Kentrox”, because it was a wholly-owned subsidiary of ADC Telecommunications. ADC had bought Kentrox in 1989 from its prior owner, Plantronics, which is today known as Poly. Prior to Plantronics, Kentrox had been an independent startup company. At the time, it was one of the bigger startup successes in the nascent Oregon Silicon Forest ecosystem, which has always paled in comparison to Silicon Valley.

Kentrox was founded by Portland-based serial entrepreneur Tom Holce. The name “Kentrox”, according to the story oft-repeated by people working at the company, was a conjunction of portions of the names of two of Tom Holce’s children, Kent and Roxanne. The obituary I linked to for Holce does list a son Kent but not a daughter Roxanne; maybe Roxanne is a middle name, or names have been changed, or the story is simply incorrect. At any rate, over the years and decades, the name Kentrox became a valuable brand within its market niche. The company’s products became known for quality, durability, and reliability. Even today I occasionally run across people who fondly recall their experiences with Kentrox products.

In May of 1992, Kentrox hired Rick Gilbert as V.P. Engineering; Rick later became CEO. Another key executive in the Kentrox Sales organization, Mark Skurla, was already at the company when I joined in 1991. Two decades later, all three of us worked together at Westell Technologies, which was headquartered in the Chicagoland area, two time zones away from Portland, Oregon. I described my contribution to Rick’s hiring at Westell in How I hired my boss, or appear to have.

In 2013, more than 22 years after I had been hired by Kentrox, and 15 years after I had left, Westell acquired Kentrox. To some, especially those who had lost touch with what happened to Kentrox over the intervening years, it appeared as though Gilbert, Skurla, and Shaver were feeling nostalgic, and had convinced the Westell Board of Directors to spend millions of dollars to acquire Kentrox in some sort of attempt to revive the glory days of the late 1990s Internet boom. Kentrox, by the way, had done very well from 1991-1998, growing from $25 million in revenue to $144 million; those were good years to be selling high-speed Internet access products and systems.

A Kentrox RMM-700 IoT probe, with the new Westell brand on it

The real story is more complicated. Kentrox was doing great in 1998, but there were early signs of trouble ahead. In particular, the parent company ADC was trying to consolidate it with other ADC divisions that did not offer any true synergy with Kentrox’s business. Rick Gilbert made an attempt to spin Kentrox out or sell it to another larger networking company where there would have been true synergy, such as Cisco Systems or other purveyors of gear to Internet Service Providers. That effort failed due to a lack of vision on ADC’s part and a hesitancy to sell a division which was the second most profitable within the corporation. It was a classic case of being unable to follow the four-word plan which is guaranteed to make money on investments: “Buy low, sell high.” The problem is that it is awfully tough to buy low, and perhaps even tougher to sell when the price is high.

So ADC held onto Kentrox. Then the dotcom/Internet/telecom bubble burst, taking down the value of ADC stock and pretty much every other company in the industry, Then if ADC had wanted to sell Kentrox, the price would have been much lower than in 1998. So ADC continued to hold. Kentrox, however, was becoming somewhat unrecognizable, as its various functions were merged into other parts of ADC. ADC downsized the Portland-area operations, and many employees left. Product sales decreased, and new product introductions slowed.

Eventually ADC decided they had extracted what they wanted from the Kentrox, and agreed to sell off the remnants. All that remained was a small crew of Kentrox old-timers selling and servicing some old products and a few new ones. It is here that my own knowledge becomes a bit fuzzy: ADC sold off Kentrox to a private equity firm. I think the Kentrox management team had some skin in the game. I seem to recall it being sold from one private equity firm to another, although maybe this is incorrect. At any rate, Kentrox was by then a small fraction of its former size.

To get some growth, Kentrox acquired a company named Applied Innovation, which was based in Dublin, Ohio, a suburb of Columbus. Applied Innovation was in the marketspace of what would come to be known as industrial-grade Internet of Things (IoT). They had a software management system which was used in centralized control centers and which aggregated data, status, and alarms from potentially thousands of locations where probe devices were deployed. The probe devices were small embedded computers with lots of ports on them to connect to a wide variety of environmental sensors. 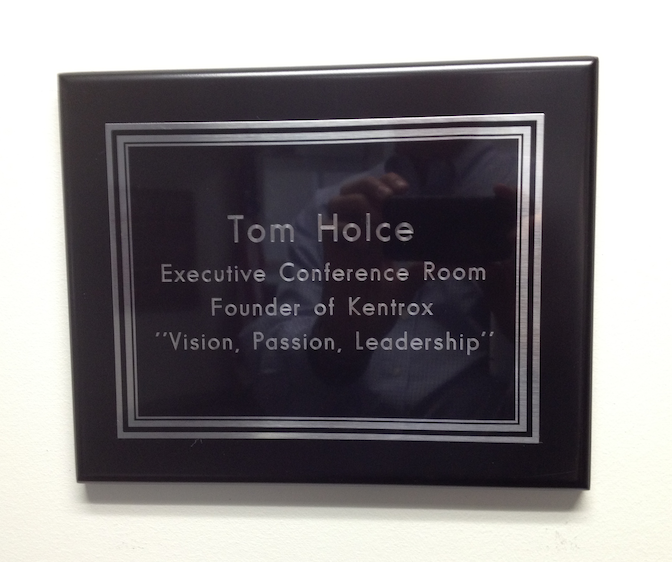 The Tom Holce conference room at Kentrox’s Dublin, Ohio headquarters at the time of the Westell acquisition

Finally, along comes Westell in 2012 and 2013, looking for acquisitions. At this point Rick Gilbert, Mark Skurla, and I were all members of the Westell management team, with Rick as CEO. Westell had sold off its broadband CPE product lines to NETGEAR, and was looking to get away from consumer products and into industrial markets where software was crucial. We felt that the industrial IoT marketspace was going to grow over the years ahead. Applied Innovation, recently re-branded as Kentrox, was available at a decent price, so Westell bought it from the private equity firm that owned it.

Besides the brand name and a conference room named after Tom Holce, all that was left of the Kentrox that I remember from 1998 was a small amount of old Kentrox product inventory on a few shelves in the Dublin, Ohio warehouse, plus a couple Kentrox long-term remote employees who had managed to stick with the company through all its many gyrations. It really was Applied Innovation that Westell had acquired, not Kentrox, although the Kentrox brand name came along with it.