Book review: The New Great Depression: Winners and Losers in a Post-Pandemic World, by James Rickards

tl;dr: An evidence-based, reasoned view of the pandemic and the future, that runs counter to the mainstream...

There’s a huge potential pitfall in writing a book about a pandemic while still in the midst of said pandemic: future events may prove the author wrong. James Rickards presents the evidence for his pessimistic view of the post-COVID-19 pandemic future in The New Great Depression: Winners and Losers in a Post-Pandemic World. Rickards’ views, to cite just one comparison, stand in stark contrast to the optimistic scenario predicted by Nobel Prize winning economist Paul Krugman. Krugman, in his November 19, 2020 “Biden Boom” column in the New York Times, predicts that, thanks to the vaccine, “it’s a good guess that we’ll get this pandemic under control at some point” in 2021 and “it’s also a good bet that when we do the economy will come roaring back.” One of these two economists is very, very wrong (my guess is that it is the economist who predicted in 1998 that “by 2005 or so, it will become clear that the Internet’s impact on the economy has been no greater than the fax machine’s”).

I side with Rickards’ view of the future. Rickards does an admirable job assembling evidence for his beliefs from a wide variety of specialties in addition to economics: epidemiology, history, psychology, and mathematics. Even though The New Great Depression was written before the successful trials of the first vaccines (publication was delayed due to pandemic-induced logistical problems at the publisher), I think there’s a good chance that the predictions Rickards makes will hold up over time. When I walk around and see shuttered businesses, and read the figures on job losses, bankruptcies, homelessness, and poverty, and then recall just how painfully long and slow the recovery was from the Great Recession, it’s hard to see a “V-shaped” recovery happening except in the stock market (which is just a Federal Reserve-inflated asset bubble, in my opinion). 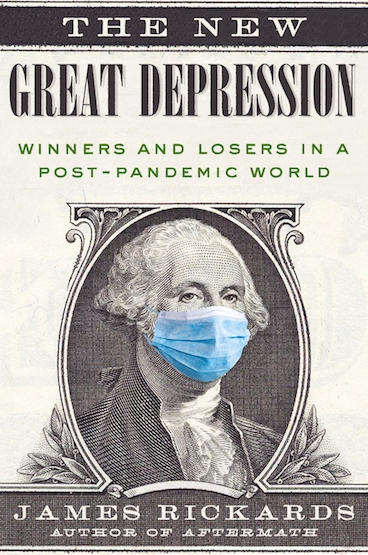 Rickards is not afraid to present views, backed up by evidence, that run counter to the current mainstream narrative, starting with his strong statement that “the lockdown of the U.S. economy and the end of social intercourse beginning in stages in March 2020 will be viewed as one of the great blunders in history.” Rickards describes why he believes that “the evidence points strongly to a conclusion that the lethal virus leaked from the Wuhan Institute of Virology”, instead of appearing first in a Wuhan wet market. He posits that “fear of infection, the antisocial conditioning of quarantine and lockdown, and sheer uncertainty as to when or if the pandemic would end were contributing factors to nationwide unrest on a scale not seen since the urban riots of 1968.” Over time, as the history of this pandemic is written, I think Rickards will be proven largely correct.

As for the economy, Rickards forecasts a long slog and years of subpar performance, which would qualify as a “depression”, although that term is more nebulous than “recession”, which has a technical definition and an official arbiter. 2020 was a year in which all major countries except China saw Gross Domestic Product shrink significantly. Rickard’s shows why it will take the U.S. “economy well into 2023 before reaching output levels last achieved in 2019.” The job market may never get back to the low official unemployment rates experienced in 2019: “unemployment will start to decline, yet from such high levels that hard times will persist for millions of workers for years to come.” For some readers, it may be depressing to read statements such as these. For me, I find it refreshing to have a more realistic view of the future than the cheerleading done by our politicians and political partisans such as Krugman. The pandemic turned out to be much worse than the politicians thought initially, and I believe the recovery will also.

Rickards concludes The New Great Depression with practical investment advice, including a recommended portfolio sector allocation. That allocation is very conservative, with large percentages in cash and bonds, and a relatively small allocation to stocks. If (when?) the stock market crashes, Rickards’ portfolio will be very well positioned. Rickards still believes that deflation remains in play, hence the advice to hold bonds, whereas I’ve sold mine. Eventually, our views about inflation will coincide, and we’ll get the inflation that the Federal Reserve needs to generate to get the U.S. out of the liquidity trap and the massive government debt that we’ve accumulated. Rickards, as he has done in previous books, again presents his (and FDR’s) advice to the Federal Reserve on how to generate inflation: set a new dollar price for gold, which would devalue the dollar and cause other prices to rise. The Federal Reserve may not have to do this, as above-target inflation appears to already be showing up in the Consumer Price Index and the bond market. Someday, we may even get the new non-dollar-based international monetary system that Rickards has argued for previously.

Which of Rickards’ views will ultimately be proven correct? I recommend reading The New Great Depression and then watching the news unfold over the years ahead to find out.