tl;dr: Edifying explanation of what happened in Germany one hundred years ago during the hyperinflation years of the Weimar Republic...

Even though I was a schoolkid through high schooler at the time, I can vividly recall the last great inflationary period in the United States: the decade of the 1970s (although, arguably, the inflation started in the late 1960s and wasn’t conquered until the 1980s). Candy bars kept increasing in price, or got smaller; baseball cards had fewer in a pack; gas prices went way up and most gas pumps (which were mechanical back in that timeframe) had to be modified to allow prices above 99 cents per gallon. Items in the grocery store would often have multiple price stickers on them of increasing price (this was in the days before UPC bar codes): sometimes I would peel off the upper ones to surface the lowest one, to save my mom some money.

Later in the decade, I started saving money for college, and got very high interest rates (well above 10%) for some Certificates of Deposit (CDs) that I bought. Tuition during my four years at Cornell jumped from a number in the six thousands my freshman year to over ten thousand as a senior. I remember the WIN buttons (“Whip Inflation Now”), stagflation, gas lines, the first Japanese imported car I ever saw (a tiny yellow Subaru purchased by a next-door neighbor which immediately started to rust), the “malaise” of the Carter presidency, and the emphasis Ronald Reagan placed on the "misery index”: the inflation rate plus the unemployment rate. It’s fair to say that people were not, in general, happy about the state of the economy.

I did not, however, have any knowledge of two fantastic books written in the 1970s on the subject of inflation. I didn’t learn of the existence of these books until recently, through a podcast that I subscribe to: The Grant Williams Podcast. I’ve also now seen other financially savvy folks recommend them, including Michael Burry, who is one of the very few people who sniffed out the housing bubble and figured out a way to profit from its bursting (Burry is one of the people profiled in Michael Lewis’s book The Big Short, which I read and reviewed). I’ve now read both inflation books; the first is reviewed here, and the second, Jens O. Parsson’s Dying of Money, is reviewed here. By the way, I do recommend reading them in that order, which matches their chronological focus areas: When Money Dies is solely concerned with the German inflation of the 1920s, whereas Dying of Money is primarily concerned with the U.S. inflation of the 1970s. 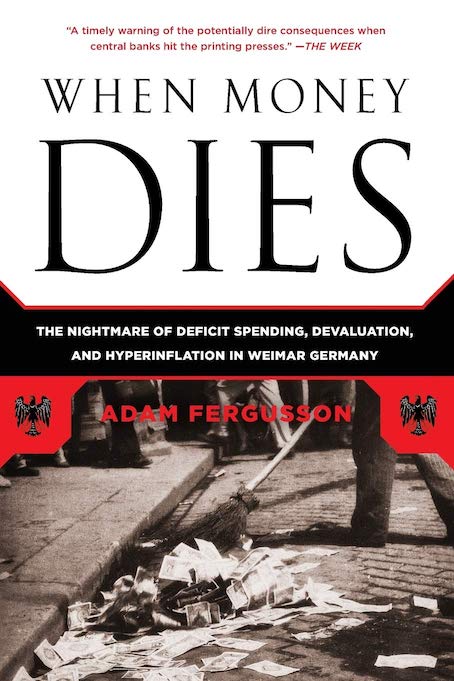 Adam Fergusson was a British journalist and politician, which gave him access to the primary source material for When Money Dies: missives written and sent back home by British civil servants and citizens who were posted in Germany during the Weimar Republic’s inflation years. Because these authors were British citizens, they provide a somewhat dispassionate, reasoned view of what was happening, in real time, to the Germans they observed: both ordinary German citizens as well as the various politicians and bankers who were guiding the economy.

There are plenty of sad stories and policy mistakes described in When Money Dies, but the biggest shock to me was how hardly any of the politicians and bankers realized at the time what was actually happening, and how they were contributing to the growth of the inflation. The widely held belief at the time was that something other than massive money printing was causing the inflation, whether that be the French or other foreigners, currency speculators, hoarders, industrialists, Marxists, etc. The money printing was seen as a necessary response to the inflation; in fact the currency bureaucrats were downright proud of the way they were able to increase the speed at which paper marks were printed. There is actually a valid argument that, due to the debasement of the paper mark, more currency was needed to match the real value of the goods produced in the economy. It shows how hard it can be in economics, and in many other realms of social science, to determine a cause and effect relationship when a correlation exists. The acid test came at the end: when the mark was once again anchored to a real store of value and the massive printing slowed, the hyperinflation ended.

There are several important lessons of When Money Dies, which I think apply to all economies even now. The first is that the cause of a major inflation is misdiagnosed by many. So-called monetarists such as Milton Friedman (and Adam Fergusson falls into this camp) would say that “inflation is always and everywhere a monetary phenomenon”: too much money is printed, chasing too few goods, which necessarily drives up prices as belief in the currency’s value (i.e. confidence) is eroded. Yet there are plenty of economists who believe that the Weimar inflation and other inflations had other root causes, and who also believe that it is highly unlikely that the U.S. will experience any significant inflation now, regardless of all the money printing and debt monetization done by the Federal Reserve, and the helicopter money doled out by our elected politicians.

The second major lesson of When Money Dies is that, once inflation sets in and people notice it, the knee-jerk reaction of politicians and many bankers is to print and distribute even more money to people, to help them deal with the rising prices. There is a huge hesitancy to take any steps to strengthen the currency, for fear of unleashing a recession and hurting people by throwing them out of work. The third major lesson of When Money Dies is that inflation has different effects on different asset classes and groups of people: there are a few winners and many more losers. There are ways for investors to avoid the ill effects, by being among the first to get out of the local currency and into other currencies or hard assets. The final major lesson of When Money Dies is what it took for the Weimar hyperinflation to end: confidence in the mark had to be restored by anchoring it to something of fixed, widely accepted value. With a purely floating fiat currency like the German paper mark of the 1920s or the U.S. paper dollar of the 2020s, this takes a major structural change.

Could hyperinflation happen in the United States anytime soon? The U.S. in the 2020s has major differences with Germany in the 1920s: the U.S. dollar functions as a global reserve currency, whereas the German mark was not; the U.S. did not just lose a war which destroyed a significant portion of its industrial capacity; and the U.S. is not on the hook to pay war reparations. The German hyperinflation started slowly and spun out of control rapidly; it’s hard to see a U.S. inflation ever devolving into hyperinflation. But the U.S. has definitely had periods of high inflation: the 1940s and the 1970s. It’s easy to see how another inflationary decade can beset the United States economy, prolonged by the continued misdiagnosis of its causes and the desire to help those punished by inflation by printing even more money, which feeds the inflation further. It is left to an exercise for the reader to decide whether the 2020s will be an inflationary decade in the U.S.