I’ve now been on two significant hikes into Grand Canyon. This post is an exercise in long-term memory recall, as I chronicle what I remember from my first hike, nearly 34 years ago, during Thanksgiving, 1987.

I’m reasonably certain of the date only because my remembrances fit what was happening in my life at the time, and because that’s the timeframe that the friend I did the hike with remembered recently. My friend was someone with whom I attended Cornell, and who accompanied me on a cross-country motorcycle trip after graduation, so we had been on many outdoor adventures together. We had missed Grand Canyon on the motorcycle trip: our route took us north of the canyon from Utah into Nevada, meeting up with the Colorado River at the Hoover Dam and Lake Mead. We both wanted to see Grand Canyon, so when he attended the University of Arizona (UofA) for a master’s degree, we had our chance. I flew to Tucson from upstate New York, where I was living at the time, bringing my backpack, sleeping bag, clothes and other gear with me.

We did the hike with several other UofA friends that my friend knew: I think our group totaled five. Fortunately, several of them were experienced outdoorsmen who had hiked and camped in Grand Canyon before. That experience was crucial for the hike that we were attempting: a backcountry hike of four days and three nights (or perhaps it was three days and two nights?), bringing all our food with us, sleeping in tents and sleeping bags, and resupplying our water wherever we could find it, by using high tech filter pumps to hopefully remove any microscopic parasites from the few running streams that we encountered along the way. I trusted that my friend’s friends knew what they were doing, and they did. Grand Canyon is an unforgiving place with very few amenities, and lack of knowledge and preparation can be deadly. 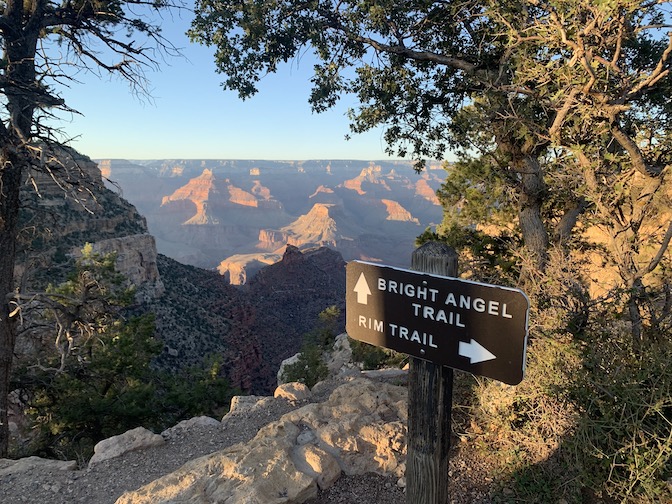 Picture is from 2021, not 1987: the sign at the start of the Bright Angel Trail on Grand Canyon's south rim

I recall the drive from Tucson to the canyon: we took two cars, so that we could do our planned one-way hike by leaving a car at our destination before starting the hike. Back in 1987 Phoenix was much less populated than it is now, and closer in size to Tucson. As we drove north on the highway it seemed that Tucson was mostly 2-story apartment buildings whereas Phoenix was 3-story apartment buildings. When we got to Flagstaff at night, at elevation 7000 feet, there was a foot of the lightest, fluffiest powder I had ever seen on the ground (the Steamboat ski area calls this type of snow “champagne powder”). We went to a country-western bar, which was the center of the action in town. Flagstaff seemed to be a real cowboy type of town. It was colder than I had expected, since my Northeasterner’s impression of Arizona at the time was that it was always hot and sunny, with cactus, palm trees, and swimming pools. My mind was just being opened to the varied geography and people of Arizona.

I was a bit concerned about the snow in Flagstaff. We were attempting our hike pretty late in the hiking season, which has its pluses and minuses. On the plus side, it was not super hot when we reached the Colorado River on our hike: I seem to recall pleasant temperatures in the 70s Fahrenheit, and dehydration was not as much of an issue as it is during the hotter months. On the minus side, there were some patches of snow at the Grand Canyon’s south rim, and it got pretty cold when we were camping in the canyon. I was warned to shake my boots out in the morning before putting them on, in case a scorpion had crawled in overnight, seeking warmth and shelter. But overall, it was a great time of year to do this particular hike.

I’m pretty sure, but not 100% sure, of the route that we took. We descended into the canyon on the Bright Angel Trail, occasionally encountering teams of mules, and took it all the way down to the river. The Colorado is not anywhere near as wide a river as the Mississippi or the Hudson, yet it (along with the side rivers and streams that flow into it) has been able to carve a massive canyon. It shows you the power that the compounding effects of time can have, across millions of years. 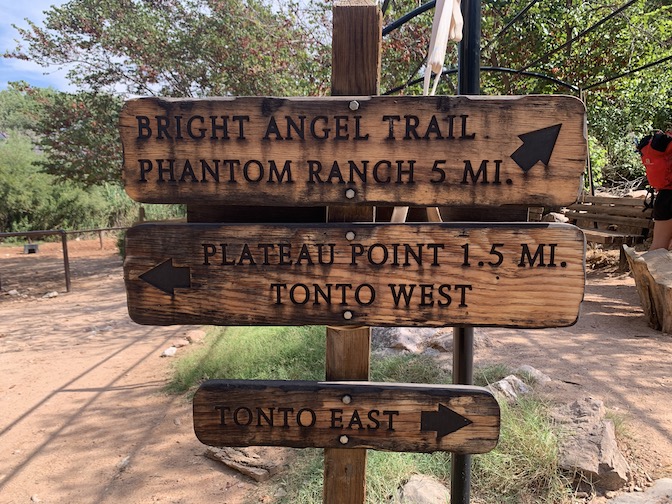 Again, the picture is from 2021: the sign at the junction of the Tonto and Bright Angel Trails

We then partially retraced our route back up the Bright Angel Trail to the Tonto Plateau where we took the Tonto Trail east, camping along the Tonto Trail, where we spent most of the rest of the hike. The Tonto Plateau is a flat, fairly wide area which is visible from the Grand Canyon’s rim: it often prevents rim dwellers from being able to see the Colorado River, because the Colorado River carved a narrow final channel down to its present elevation from the Tonto Plateau. On the second day some of our party made a second descent to the river; this must have been along the Kaibab Trail. I demurred, as my legs were already feeling the effects of the first day’s long descent (going down is harder on the legs, I think, than going up). When we ascended out of the canyon on the last day, I am pretty sure it was along the Grandview Trail.

Once we got away from the Bright Angel and Kaibab trails, there were very few other hikers along the Tonto Trail. I think each day we were on it we encountered three or four other hiking parties. This was the most special part of the hike, due to the beauty of Grand Canyon, the peace and quiet, and the fact that we were able to conquer the challenges and experience the canyon in a way that few other people do. At times the Tonto Trail took us through side canyons; this was where we encountered some of its most dangerous portions. The trail was wide enough to walk along with a pack, but if you stepped off the trail, you would slide down a steep hill into a side canyon. We had to keep our wits about ourselves, and concentrate on putting one foot in front of another and not looking down.

The stars were brilliant at night; the air was clean and brisk in the mornings. The canyon slowly warmed up as the sun rose high enough to light up various portions of the plateau and side canyons. The perspective from being inside the canyon and looking up was very different from being on the rim looking down. It was a memorable trip that I can still recall nearly 34 years later. My final memory is from my flight back to upstate New York: I thought how most people go to Arizona that time of year to get warm, but I went to Arizona to be outdoors in the cold.