tl;dr: My first significant hike in Grand Canyon in more than 33 years and a prelude to the next adventure...

My wife and I have visited Grand Canyon a few times since we moved to Arizona. Even if you stay up on the rim, it is a site well worth seeing, like none other in the world. The immensity is nearly unfathomable; the views change with location, orientation, the time of day, the sun, and the weather; and the geological history on view is unmatched.

There are more facilities and buildings on the south rim than there were on my first visit and hike in 1987, but many of the original historical structures are still present and in working order. We like to stay at Yavapai Lodge, which is a short walk through the pine woods to the main ranger station and the outdoor auditorium for the nightly ranger talk, and then onto the rim trail. It reminds me of the motels that my family would stay at on vacation when I was a kid.

On our previous trip to Grand Canyon we stayed mostly on the rim trail, with a short hike down the Bright Angel Trail to the second of the two tunnels, which are within a mile of the top. The goal for this hike was to head down the Bright Angel Trail to the Tonto Plateau and the Tonto Trail, which is where I spent much of the time on my multi-day hike years ago. This would cause us to descend most of the way down the canyon towards the river, as the next step in progression to our ultimate goal, a rim-to-rim hike sometime next year. One aspect of the rim-to-rim hike that I’m looking forward to is visiting the north rim, which is quite remote and hard to get to, especially from the south. I’m not sure yet if we’ll do one more interim step, which would be a rim-to-river-and-back hike. 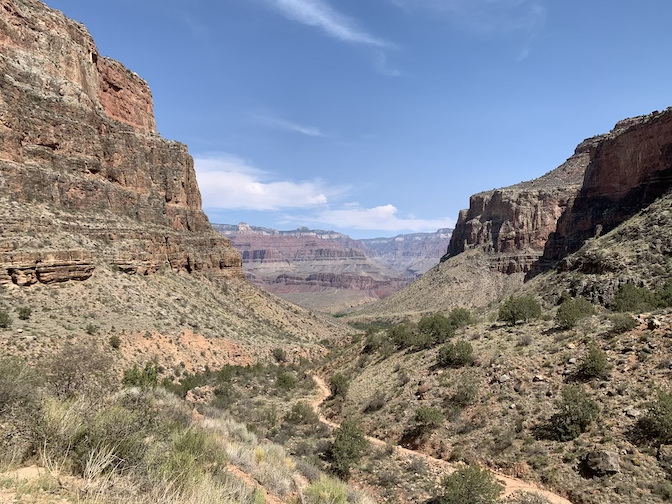 I was curious to see how much of the route I would remember. I was also curious to see how my body would perform with more years of wear and tear. The answer to the latter curiosity is, unfortunately, not as well as when I was in my twenties: I doubt I could have done the four day hike I did back then without some more serious training. It’s a fact of life that bodies degrade with time; by staying in shape, the process can only be slowed, not stopped. It’s something we all have to accept.

The hiking poles we used helped quite a bit and turned me into a big fan: I would say roughly half the hikers on the trail were using them. As for the route, the rest areas and facilities along the way are much improved and more numerous than in 1987, especially the restrooms with fancy composting toilets. There are multiple water stops along the Bright Angel Trail, which is one of several reasons why it is so popular. This was fortunate because, even though the hottest temperatures we experienced were in the mid-eighties Fahrenheit at our destination of Indian Garden, we ended up drinking more water than expected. By filling our bottles at every water stop, we never ran short. Once you get off the Bright Angel Trail, or if the water system fails (the water is piped down from the rim), then water becomes a much bigger issue.

Grand Canyon was as green as I’ve ever seen it. We’ve had a decent monsoon season in Arizona this summer, and the plant life has responded to the above-average rainwater. Indian Garden was rich with vegetation, a true oasis at the beginning of the Tonto Plateau. Garden Creek was flowing with relative abundance, and we sat alongside it while we ate the lunch items we had brought. It was a magical moment. 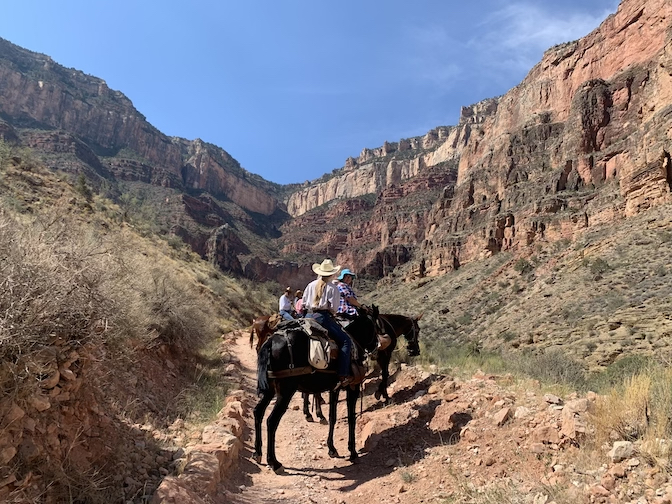 On the return ascent, we made the mistake of charging back uphill without taking the heat, elevation, and our full stomachs into account. My wife had to rest for a while to recover her equilibrium before we continued uphill at a more relaxed pace, with more frequent rests. We learned some lessons and made notes of different tactics to try on our next Grand Canyon hike. We did make it to the top without too much difficulty, and celebrated with ice cream.

The south rim is around 7000 feet elevation, and there’s no way to simulate the thinner air here in the Valley of the Sun. There are some hikes in the area, such as Piestewa Peak and Tom’s Thumb, which are fairly vertical hikes, which can simulate the terrain and degree of difficulty of a Grand Canyon trail such as Bright Angel. We plan to do some training on those trails, including doing them twice in one day, to cover roughly the same elevation as a Grand Canyon rim-to-river hike.

It was a memorable hike and a fun trip down memory lane, even though I’m not the same person physically that I was in 1987. My wife and I are looking forward to even more of a challenge on our next Grand Canyon hike.