Top Gun: Maverick may be just what the country needs now that it is “a time of war and global peril”, according to the President of the United States. Just like the original 1986 Top Gun, the movie showcases the U.S. military, more specifically the Navy, at its best. It delivers exactly what the audience should expect: lots of adrenaline, fighter jet action, explosions, harrowing escapes, and heroism, with just enough character development to keep you caring about the outcome.

Top Gun: Maverick is nothing deep, and I caution against analyzing it from a political angle. My advice is to just sit back and enjoy this Hollywood spectacular, a classic battle of good versus evil. The enemy is not identified by name, but the audience knows they are evil because they always wear black helmets. As a Hollywood movie you already know the ending; the only real question is how do they get there? A major element of the plot was lifted from the original Star Wars movie, so anyone who has seen that movie will know how it turns out. 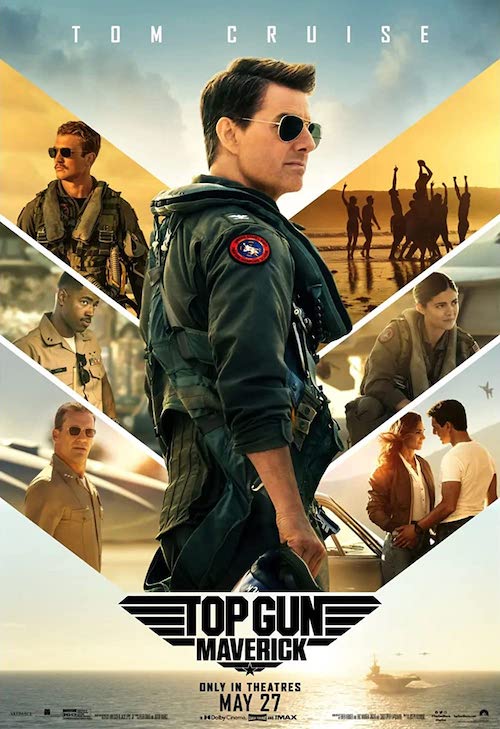 I didn’t bother rewatching the original before seeing Top Gun: Maverick, and I can’t remember much of the original’s plot, so I was somewhat lost when the characters referred to events in the first film. The director used some of the same flashback techniques as were used in Blade Runner 2049, a film with a much more complex plot that also appeared around thirty-five years after the original. If you want to pick up every detail of Top Gun: Maverick, go ahead and rewatch the original. Since the action is the major point of the movie, I didn’t feel as though I missed much by last seeing Top Gun decades ago.

I saw Top Gun: Maverick the day before Tom Cruise turned sixty years old. He is a walking advertisement for whatever regimen of diet, exercise, and lifestyle he is practicing to maintain his matinée idol good looks. As with the movie itself, I advise against analyzing Cruise’s performance from a political angle which considers what it means for his advocacy of Scientology. Appreciate him for what he is: a good looking, likable actor who can headline an action film at nearly sixty years of age and pull it off without looking the slightest bit ridiculous.

There are some other good performances in Top Gun: Maverick. I especially thought Charles Parnell was perfectly cast as Navy top brass officer “Warlock” Bates. But the real stars are the planes, the aircraft carriers, and the pilots who generated the footage in the battle scenes. Top Gun: Maverick contains plenty of action to get your heart pumping.