Management via food and coffee

tl;dr: Everyone loves a free lunch, but when the coffee disappears it is never a good sign...

Outside of the usual compensation and benefits package, what is the most appreciated perk that companies can provide to employees? In my experience it is definitely free food, by a significant margin.

Everyone has to eat. Nearly everyone enjoys a professionally prepared meal that does not require the expenditure of time, other than to eat it, or payment. If the company provides a free lunch on occasion, it saves employees the time it would take to prepare lunch themselves, or to venture forth from the office to obtain lunch. Some or all of the money the company spends on the lunch might flow back to the company via extra work output from the employees’ time saved. The employee morale boost and camaraderie also benefits the company. Because the additional work output and the goodwill both provide a payback to the company, the expression “there’s no such thing as a free lunch” still holds, but employees still love free lunches.

Free food can take many forms. Companies can provide the occasional free lunch for special meetings, events, and milestones. A manager can authorize food for a team that is putting in long hours on a critical project. With food delivery services more prevalent than ever, this is easier than ever. A manager can take an employee out to lunch on the company’s dime. My boss at ADC Kentrox in the 1990s did this quite regularly: sometimes we’d go to a nearby brewpub and down a beer or two along with our lunch (it was a different era). Salespeople and others who travel typically get their meals covered by the company. All of these are appreciated by most employees. 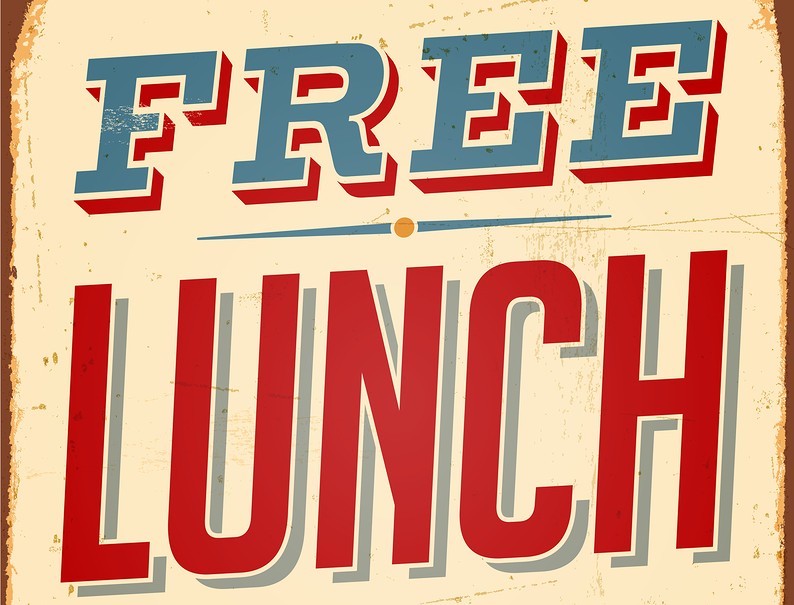 Who doesn't love a free lunch?

I’ve never worked for an employer that provided free lunches every day for employees, although I got to experience this once when I visited Google’s main campus in Mountain View, California. The Google employee I was meeting with took me to the cafeteria, which featured a wide variety of options from cuisines around the world, to appeal to Google’s international employee population. The food was quite good, and it was indeed free. The high-quality, free food helped Google attract high-caliber employees. Given the size of Google’s campus, and the travel time that would be required to leave central campus for lunch, it also saved employees a significant amount of time.

The closest I’ve come to working at a company that always provided free meals was when I worked as an engineering co-op student at Teradyne’s headquarters building in downtown Boston, in the south end. It was an eleven story building that was on the other side of the interstate from the main downtown area, and there were not too many food options in the immediate surroundings. So the company put a cafeteria on the eleventh floor, with large greenhouse-style windows looking north towards the Boston skyline, and offered subsidized meals. Employees still had to pay something, but the cost was cheaper than any option other than bringing food from home. Most employees ate lunch in the cafeteria, and quickly returned to their desks to continue working. The food was not as good as Google's.

In contrast to free lunches, free coffee is a fairly ubiquitous perk. A cup of coffee, or even two or three, costs the company a lot less than a lunch. The company likely makes back the cost from the employees’ time saved plus the extra productivity from the caffeine coursing through the veins of their coffee-imbibing employees.

Unfortunately I have been an employee at a company that discontinued the free coffee perk: this happened at Westell when it fell on hard times in the late 2000s - early 2010s. The industrial coffee machine and bags of Starbucks ground coffee beans went away, and coffee-addicted employees were forced to fend for themselves. I brought a Nespresso machine to work along with coffee pods that I purchased for myself. Others brought in other machines and devices. Some people made a daily habit of stopping by Starbucks or some other coffee shop on the way to work, to stock up on brewed coffee for the day. Westell had a manufacturing facility which had a coffee vending machine, so office workers like myself could take a walk and spend a few coins to obtain a cup. There was a fairness issue when the office workers had free drip coffee: the discontinuance solved this issue, but it also could have been solved by providing free coffee in the manufacturing wing. The end result was that we coffee drinkers collectively spent a lot more time obtaining our coffee than when we could just go down to the coffee room and pour a cup.

The money that the company saved was trivial, and it did not change the company’s trajectory. It was really intended to send a message: the company has fallen on hard times and needs everyone to spend as little money as possible. Since the biggest expense in most high-tech companies is employee salaries, it ended up being a warning that layoffs were coming.

When I saw an article a few days ago with the partial headline Goldman Sachs yanks ‘free coffee’ perk, I knew what it meant. Sure enough, the very next day the Wall Street Journal published an article titled Goldman Sachs Plans to Cut Hundreds of Jobs.

It’s never a good sign when a company eliminates the free coffee.