tl;dr: Supply chain issues will persist as globalization ends and the world separates into West versus East...

Most economists barely know how supply chains actually work in the real world. Keynesian economists, which constitute the mainstream of the profession, spend their time constructing and debating models of the demand side of the economy. In my Are you smarter than a Nobel Prize winner? post, I captured the Tweet from Paul Krugman in which he admits that he “got inflation wrong” and then immediately starts talking about the demand side of the economy instead of the supply-side issues caused by lockdowns, shortages, and shifts in buying patterns. For the supply side, Keynesians like Krugman usually just declare that “slack capacity and labor exists”, so that any increase or change in demand can easily be met with more products and services produced at the same costs as existing ones.

Another time on Twitter I got into a debate with an economist who was dismissive of the Purchasing Managers’ Index, claiming that he had never met anyone with the title of “Purchasing Manager”. It’s a somewhat old-school name, with the more modern title being “Supply Chain Manager”, but every company of a certain size is going to have people with these titles or similar ones such as “Buyer” or “Purchaser”. These are the people who go out into the marketplace, research prices, terms, and availabilities, and then enter into orders or contracts to obtain whatever the company needs to conduct its business. They actually are the people with the best collective view of what is happening in the marketplace for goods and services, because their full-time jobs are to keep eyes on it and act accordingly. If prices are increasing or decreasing, or delivery times are lengthening or shortening, they will know about it, which is why I always enjoy talking with them when I want to learn about the state of the “real economy” marketplace, as opposed to financial markets or the metaverse economy. James Rickards also understands how important supply chains are. The entire global supply chain is the real economy. 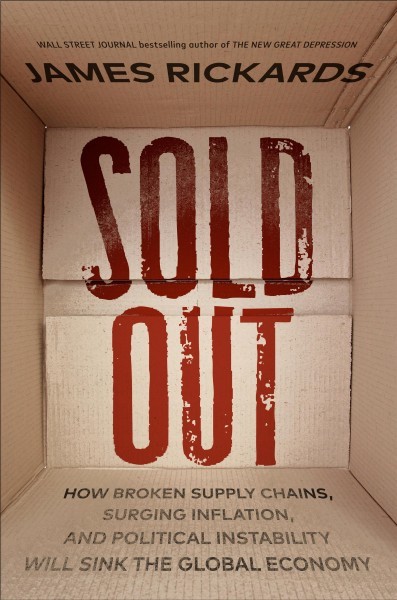 Supply chain issues got so bad during the COVID-19 pandemic that even politicians noticed them and commented upon them. In Sold Out: How Broken Supply Chains, Surging Inflation, and Political Instability Will Sink the Global Economy, author James Rickards makes the argument that the supply chain problems actually started before COVID, when President Donald Trump began his trade war with China, which has continued under the Biden Administration. Rickards believes supply chain issues will persist, as do I. Any U.S. company building products in China today is at-risk as tensions between the two countries rise. If the U.S./China relationship back in the first decade of this century had been as fraught as it is today, the company I was working for at the time would not have outsourced manufacturing to China.

China is just one contributor to the current supply chain problems: there are plenty of others, including energy shortages and the War With Russia. The ultimate solution, Rickards argues, is something he calls “Supply Chain 2.0”: a reconfigured global supply chain that reflects the separation of the world into West versus East (to use overly simple labels). This will take years, just like it will take years for Taiwan Semiconductor Manufacturing Company to build its $40 billion plant in North Phoenix. But the transition has begun.

The current global supply chain may not be as dire as Rickards describes. The Global Supply Chain Pressure Index, which Rickards describes in the book, has come down from the extremely high levels it was at when Rickards wrote his text, although it is still elevated. Month-over-month consumer price inflation has subsided recently. In the last chapter of the book, Rickards makes the argument that we’re actually headed for a bout of deflation due to a pending recession and other factors which are primarily financial in nature. The highly inverted U.S. Treasury yield curve is one of several strong arguments that Rickards makes here; his weaker arguments come from economist/lawyer Dan Alpert, who is one of the Keynesians I mentioned earlier who believes that supply is easily brought on line should demand appear.

I enjoyed Sold Out, and think that many people could benefit from reading it to gain a better understanding of the complexities of modern-day supply chains. The recommendations and predictions that Rickards makes are well reasoned, in my opinion. Sold Out also functions as a historical record of the most-discussed supply chain issues during the pandemic. Remember the toilet paper shortage?