Book review: Country Driving: A Journey Through China from Farm to Factory, by Peter Hessler

tl;dr: Latest Hessler dispatch from China not his best, but should please fans...

Having enjoyed each of Peter Hessler's two prior books from and about China, River Town and Oracle Bones, I was excited to learn that he had written a third book-length dispatch from China, Country Driving. What makes Hessler's China books so enjoyable and educational to myself and (I believe) other Americans interested in learning more about the rapid change that China is undergoing, is the insight he provides on how China's changes affect and impact average people in the country. Hessler does what most of us Americans will never do: move to China for a decade, learn the language, and live in close contact with average Chinese people. His books tell the stories of the people he meets and in many cases befriends, and Hessler tells those stories with compassion, humor, and an understanding of how the stories fit into the bigger picture of China's transformations. 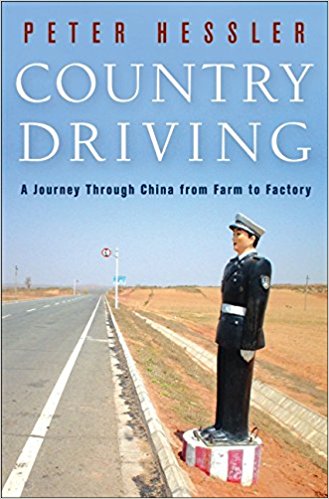 Country Driving, however, is not as intimate nor as distinguished a book as Hessler's two predecessors. This is because of the fundamental nature of the book: in Country Driving, Hessler has gained his Chinese driver's license, and a good portion of the book describes what Hessler sees while driving. As one would expect, these descriptions of scenery (with a strong focus on the Great Wall, or more accurately "Great Walls"), while interesting, don't provide strong insight into the Chinese people. Country Driving is most interesting when Hessler gets out of his car and interacts with the Chinese people, as he does in the latter two thirds of the book, which describe his experiences weekending in a small Chinese mountain town and the rise of a new factory town and factory in fast-growth coastal China.

Although he is an outsider and a foreigner, Hessler apparently develops very close relationships with several of the people he meets, and those people trust him enough to bring him into private conversations and to let him know important family secrets. His writing is most insightful when he is able to develop those relationships, because it provides an intimate portrait of how average Chinese people react to the changes the country is undergoing.

Having read all three of Hessler's China books, I would rank River Town as the best, followed by Oracle Bones and then Country Driving. Fans of the first two books, however, should enjoy Country Driving. At the end of Country Driving Hessler is back in the U.S.A. and married, so perhaps this is the final book of what will be his living-in-China trilogy. I am very glad he embarked on this project, and I have learned much from his writings.