Book review: The End of the Road, by John Barth

tl;dr: Barth 102: An Introduction to the Master, continued...

The End of the Road shares a central plot element (a love triangle) with Barth's first novel, The Floating Opera", but in The End of the Road the relationship is about as far from consensual as can be, and as a result The End of the Road is a very different, even more powerful story. Barth crams a lot of substance into The End of the Road, and it succeeds on multiple levels: as a compelling story with much for the reader to ponder, as a political statement (John Irving appears to me to have been inspired by the ending of The End of the Road in his acclaimed Cider House Rules), and as applied philosophy, with religious undertones. 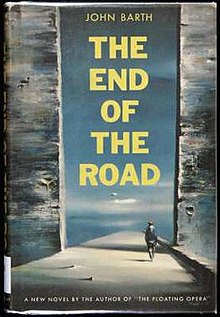 "In a sense, I am Jacob Horner," states Jacob Horner, the Barthian hero/anti-hero of The End of the Road, at the very beginning of the story, but who is Jacob Horner (or whom does he represent)? Jacob Horner may represent the ultimate modern man, a person who rejects objective, absolute truths in favor of relativism, and who is so imbued with knowledge that he can see all sides of any argument, contradiction or paradox. At times Horner is completely paralyzed from acting, and at almost all other times his actions are timid to the extreme, such that he relies on "the Doctor", who prescribes nonsensical therapies to get Horner to take action, any action. Horner's thought process has many parallels in today's society, especially leaders who can't make up their minds and waffle on the issues. Horner suggests he may be the devil, but his logical thought process (his ability to see and accept opposite qualities in others, as in a love/hate relationship) suggests the "shades of gray", fuzzy logic thinking prevalent at all levels of modern society.

Joe Morgan, Horner's colleague, also believes only in relative values, and has even more formal education than Horner, but he has devised a philosophy which he believes tells him how to act in all situations. Morgan, whom Horner suggests may be God, is the "black and white" thinker in contrast to Horner's gray, but his philosophy has holes that become obvious to all but him at the end.

The End of the Road, while not Barth's greatest work, is everything a great piece of literature should be. Barth creates fascinating characters drawn from the fabric of modern society, puts them through episodes of high drama, and produces outcomes that provide the fodder for debate about just what it all means.