tl;dr: Appropriately named Sierra ski mecca is well worth the challenges of getting there...

Every year for the past six my brother and I escape from work and family for a ski weekend at one of the mythical ski resorts that we have heard skiers wax poetically about, in voice and in print, since we were kids. So far we have visited Squaw Valley, Mt. Bachelor, Alta/Snowbird , Sun Valley, and Steamboat, as well as some other lesser-known areas along our travels (our best powder day was actually at Timberline on Mt. Hood, but deep powder days anywhere are rare). 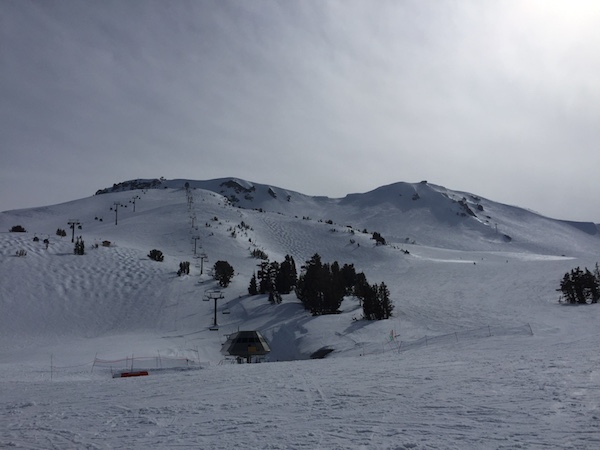 One of the fun things about these trips is seeing how each place compares to the myths built up in my mind over the years. I had always thought of Mammoth as the premier Southern California ski destination for Los Angelenos. It wasn’t until I looked at the map a little before the trip that I realized that Mammoth is actually due east of San Francisco. However because Mammoth is on the eastern side of the Sierras, which get road-closing amounts of snow every winter, the driving distance from the Bay area lengthens considerably during ski season. The driving route also takes prospective skiers past all the Tahoe area resorts. So Bay area skiers mostly ski in the Tahoe area, leaving Mammoth to L.A. skiers. We skied a day at Kirkwood in the Tahoe region before completing the drive to Mammoth, and the differences in the clientele between the two resorts are what one would expect if one knows lots of NorCal and SoCal folks (Silicon Valley versus Hollywood).

The other preconceived notions I had of Mammoth were that it is warm and sunny; that skiers wear less clothing, just like L.A. itself; and that the area is huge and somewhat haphazardly organized (more on this in a bit).

With the deluge of precipitation that California has received this rainy season, Mammoth has had record-setting snowfall, which clinched our decision to make this the year we tried Mammoth. We were not disappointed: the accumulated snow was tremendous, with nary a bare patch to be found. Both days warmed up above freezing, with plentiful sun and bluebird skies the second day, so the snow softened into perfect spring skiing conditions. Fresh powder will always be my favorite, but soft, loose, slowly melting spring snow is actually also a blast to ski in, as you can turn more with your ski bottoms than the edges, as one does in powder. You just have to be careful to follow the sun so that you ski the softer snow, not the hard pack that refroze the previous night.

Mammoth is indeed a huge mountain, with the ski area covering most of it and multiple base areas ringing the bottom. The top 1000 feet or so is above the timberline, meaning that the top is all bowl skiing and open snow field skiing. While some people love bowl skiing, especially cutting fresh tracks in powder, I am not a huge fan: bowls are often fully exposed to the sun and wind, the slope tends to be the same pitch, and there are no local landmarks or challenging obstacles other than the snow conditions themselves. I skied the Santiago Bowl and Ricochet, and those were fun, but my plans for a summit run on the second day was thwarted by the wind, which closed the summit chair but not the gondola. Even though the view from the top would have been spectacular, I decided to not to risk having my iPhone blown away trying to take a picture. Trees help break the wind, and tree skiing is a fun challenge, so I did that instead. Maybe I am becoming a Steamboat snob with my preference for tree skiing over bowl skiing. 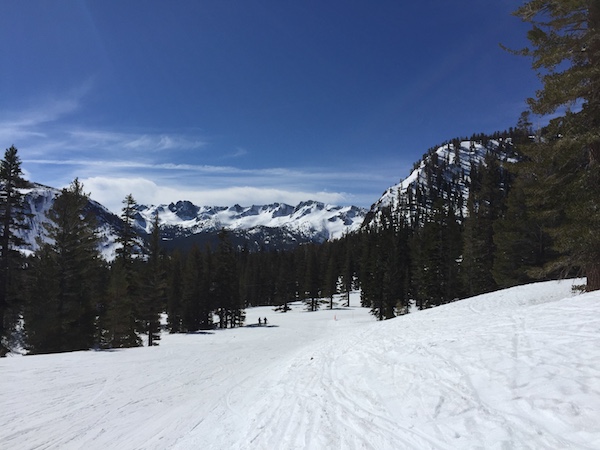 We had a great two days of skiing, but I think one would have to ski at Mammoth every day for several years to fully understand the lift system. Some of the complexity is just due to the sheer size of the ski area and the multiple bases. The lifts are not all radial lifts pointed toward the peak; a few cross other lifts or head off at strange angles, primarily to provide a way from the bases to fan out across the mountain. Even so, many of them start and end in strange places. The appropriately named Lost in the Woods lift serves the run of the same name, which is a fun blue, but not much else. One can take a left off the top of Broadway Express but not a right: the tasty runs that you can see on that side while riding the lift appear only to be accessible by making a summit run first. Or maybe I missed some subtlety. Chair 13 ends about 20 feet below the level of Chair 12, which appears to make it a one-way lift out of the Outpost portion of the mountain. Or again, maybe I missed some trick. Perhaps we should have hired a guide.

Serious ski buffs will enjoy the story of Mammoth’s founding by outdoorsman Dave McCoy. It makes perfect sense that McCoy was employed as a hydrographer measuring the Sierra snowpack for the Los Angeles Department of Water and Power; he chose a place with great conditions for skiing. I was surprised to learn that the ski season often lasts past May, and that this year they may be skiing on the fourth of July. As McCoy knew, the main downside of Mammoth is the challenge of getting there, but once one does, the skiing is world class.