Book review: How the Internet Happened: From Netscape to the iPhone, by Brian McCullough

tl;dr: An informative, entertaining history of the key events, people, and companies that made the consumer Internet revolution happen...

I heard about Brian McCullough’s book How the Internet Happened via an interview he gave on one of the tech industry podcasts in my subscription feed. I made a note of it and it finally bubbled to the top of my reading list. I purchased the ebook version of How the Internet Happened on Amazon and read it by using the Kindle app on an Apple iPad and iPhone, which was very appropriate for this particular book.

Even though I’m in the tech industry, and a history buff, and especially a history of science and technology buff, and I listen to lots of podcasts, I had completely missed the existence of McCullough’s Internet History Podcast until now. The Internet History Podcast provides some of the source material for How the Internet Happened, and I’m now sampling some of the back episodes. I commend McCullough for taking on the challenging task of chronicling, in written and audio form, the history of one of the fastest-moving industries in existence. McCullough, I discovered, also does a tech news podcast every weekday afternoon called Techmeme Ride Home. After listening to a few episodes I’ve subscribed to it and ditched Marketplace Tech. So I now have two McCullough podcasts in my feed; there just aren’t enough hours in the day.

The scope of the Internet itself is vast. To keep the book to a non-intimidating size, McCullough limits the book’s scope to, as the subtitle states, the time period from the beginning of Netscape, with the NCSA Mosaic browser project at the University of Illinois, to the first few generations of the Apple iPhone. This is perfectly reasonable, and really means that the book focuses on how the consumer Internet revolution happened. 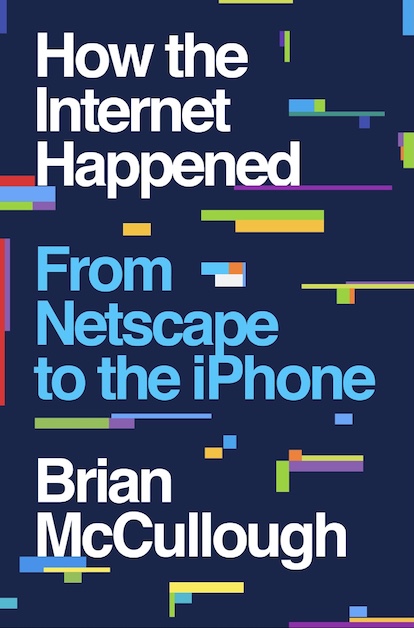 The beginnings of all five of what are today known as the FAANG companies (Facebook, Amazon, Apple, Netflix, and Google/Alphabet) are covered, as well as other companies and people that made important contributions. Today the FAANG companies are also called “Big Tech”, and there are demands from some inside and outside the government to break them up or hit them with restrictions and penalties for past and current behavior. In the timeframe covered in How the Internet Happened, each of the FAANG companies was much less threatening; four of the companies were mere startups. Each hit upon a novel idea and business proposition, and executed it well enough to wow consumers and grow into industry behemoths or, in Apple’s case, the most valuable public company in the world as measured by market capitalization. Big Tech’s legal problems came later, after the book ends, but McCullough does describe how legal issues contributed to Microsoft’s lost decade and caused Napster’s demise.

The Internet as a “network of networks” predates the timeframe of How the Internet Happened by decades and has its own fascinating history, but consumers weren’t much aware of it until the Netscape browser for PCs appeared. Even during the timeframe that the book covers, McCullough doesn’t get into much detail about the advances of the Internet’s network architecture and the Internet Service Providers (ISP). McCullough’s focus is on services and products that run over the Internet. America Online (AOL) and Cingular/AT&T are the primary ISPs mentioned. AOL receives considerable attention because they were crucial in getting millions of Americans onto the Internet for the first time, and they tried to operate a curated walled garden content model. Cingular/AT&T is mentioned because they were the wireless ISP that allowed Steve Jobs to get through the “telco orifice” and develop a wireless handset device that met his vision, not the carriers’.

I found How the Internet Happened to be both informative and entertaining. It’s well written, moves along at a quick pace, and should appeal to anyone with an interest in learning about the consumer Internet revolution. It was accurate to the best of my knowledge, based on having worked at various Internet-focused companies during the timeframe of the book, and watching and reading about what was going on at the time.

If I were to suggest one improvement, it would be that McCullough describe Facebook’s advertising engine in more detail. Facebook was a revolutionary ad platform because it allowed precise targeting down very minute segments of the population, thanks to all of the personal information that users disclosed to Facebook. If you want to show an ad to left-handed zoo lovers in southern Mississippi, Facebook can probably find some of those folks for you. Google AdWords may be the most profitable price of software ever written because it matches ads to search terms, but Facebook’s advertising engine is equally revolutionary. It also is one of the reasons Facebook is under fire, along with its algorithms.

I can definitely recommend How the Internet Happened as an excellent overview of the consumer Internet revolution. For those seeking more detail on various topics, I can also recommend these books:

Steven Levy also has a book out on Facebook called Facebook: The Inside Story, which is probably better than this book that I read years ago, which is the basis for the movie The Social Network:

By perusing McCullough’s citations, you will find other sources to check out including, of course, McCullough’s Internet History Podcast.