tl;dr: Some examples where government is crucial to the success or failure of startups...

Here is my quick take on various high tech startup companies, and a few industries, where government is crucial to the business model. Because the financial services industry is so heavily regulated, fintech (financial technology) companies have to constantly consider what the government might do, which creates both hazards and opportunities.

SoFi is my favorite company on this list, because their business model was entirely created by the government and they are almost guaranteed a profit by the government. SoFi profits from the distortions that the government seeds into the student loan marketplace by originating many student loans. The government, bless its heart, does not want to discriminate against different students by charging them different rates, or even by looking closely at the student’s ability to ultimately repay the loan. Everyone pays the same interest rate, which is “set by federal law.”

However, it’s a fact of life that there are major differences in ability to repay. A student who graduated from MIT with a Computer Science degree has a higher likelihood of repaying a $25,000 loan than a student who went to a low-ranked regional college, majored in Russian literature, and dropped out. In steps SoFi, which takes advantage of the government’s fixed interest rate for all student borrowers by cherry-picking the most likely to repay borrowers after more information is known about those borrowers, such as whether or not they actually did graduate. If SoFi determines that the borrower is a good risk, it pays off the federal student loan and replaces it with a loan at a lower interest rate. If SoFi determines that the borrower is not a good risk, it refuses to refinance that student’s loan(s), and the loans remain with the government.

The end result is that SoFi makes money, the lowest risk borrowers get a lower interest rate, and the risk profile of the government’s pool of student loans worsens, perhaps causing the federal government to set the rate higher for all in the future, which reinforces SoFi’s business model. This is far from the only reason behind the student loan crisis and the calls for student loan forgiveness, but it is a contributing factor. I first learned about SoFi’s business model back in 2015 when I was working at a startup company in the 1871 incubator center in Chicago: there was another startup (named Peanut Butter) that was working on a different aspect of the student loan marketplace. I felt that SoFi’s business model was a no-brainer, and that its main challenge would be out-executing others who copied the business model. SoFi has grown considerably since 2015, so their business model appears solid. I would characterize it as catching fish from a government-provided barrel. 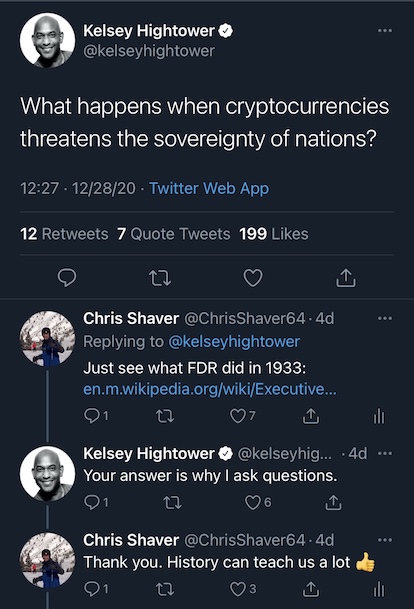 Bitcoin and other cryptocurrencies

As a technologist, I am naturally predisposed to like and appreciate Bitcoin and other cryptocurrencies. The concept of a decentralized distributed ledger certainly has its uses. Some sort of micropayments architecture for the Internet would solve some long standing problems. It would be great if currencies functioned as a long term store of value (hint: fiat currencies don’t, history teaches us). But for those who think that Bitcoin and/or other cryptocurrencies are going to someday replace the U.S. dollar and other government fiat currencies, I think they are making a huge mistake: the government will fight back, and the government has the means to win the fight, easily.

The ability to control the currency and to regulate its uses gives the government immense power over people’s lives: the government will not willingly cede that power. The financial and banking sectors are two of the most highly regulated areas of the economy. To combat crime, the government has anti-money laundering regulations such as KYC (Know Your Customer) that force financial companies to learn about their customers and track their activity. The government also cares very much about taxing certain transactions, such as receiving income. Transacting in Bitcoin would appear to be a potential way around KYC and taxes, but in order to spend Bitcoin in the real world, it needs to be converted back into the local currency.

When I mention this to people, the most common reaction is “the government can’t (or would never) do that”. Most of these people don’t realize that Franklin Delano Roosevelt issued an executive order in 1933 which outlawed the holding of gold by U.S. citizens, forcing them to convert it to paper dollars; it wasn’t until 1974 that it was legal for U.S. citizens to again hold gold. Just recently the current U.S. President issued an executive order which outlawed U.S. citizens from holding stock in Chinese telecom companies; the New York Stock Exchange responded by removing these companies from its exchange. The second most common reaction is “it’s impossible for the government to shut down Bitcoin because I can just transact in cyberspace or in some other country”. Yes, but if U.S. citizens can no longer freely convert between dollars and Bitcoin, and Bitcoin holders are stuck converting into the currencies of other nations, or into dollars via the black market, the value of holding Bitcoin will be much diminished.

The government hasn’t yet moved in a serious way to regulate or ban Bitcoin or other cryptocurrencies, but that doesn’t mean that it won’t.