tl;dr: A lesson I was taught as a child helps counteract the emotional manipulation of social media...

Social media is the area of the software profession where psychology plays the biggest role. Social media posts can evoke strong emotional reactions and be highly manipulative, just like the best advertising. As I said here, it made complete sense to me when I learned that Facebook founder Mark Zuckerberg was studying psychology at Harvard before dropping out to pursue his fledgling startup.

One of the great things that the Internet did was that it made it possible for anyone, with a small amount of money and technical competence, to post any (legal) content and make it available to anyone else. I never want to take that away; it’s what makes this blog possible. Yet that blessing is also a curse: the content can be false, either purposely or not, and the entity posting it may not be who they appear to be. How do you really know that it is me writing this post, and not some offshore writer that I’ve paid a few dollars so that I can lounge poolside instead of typing away at a keyboard? Fake content and impersonation existed long before the Internet; the Internet just made it easier to pull off, and capable of reaching a wider audience.

Social media amplifies this problem. On most social media platforms it is easy to set up fake accounts, and easy to share content with others. Most social media content is consumed on smartphones with small screen sizes as the user scrolls through a content feed. The most impactful social media content is concise, preferably visual content that evokes a strong emotional reaction. That reaction leads to a desire to share the content with others, which can cause the content to go viral. As someone who has never had anything go viral, I have yet to master this particular art.

Here’s an example which went viral on Twitter, which I am going to discuss as dispassionately and rationally as possible, although it may have evoked a strong emotional reaction in you, the reader, either now or when it first went viral during the pandemic. 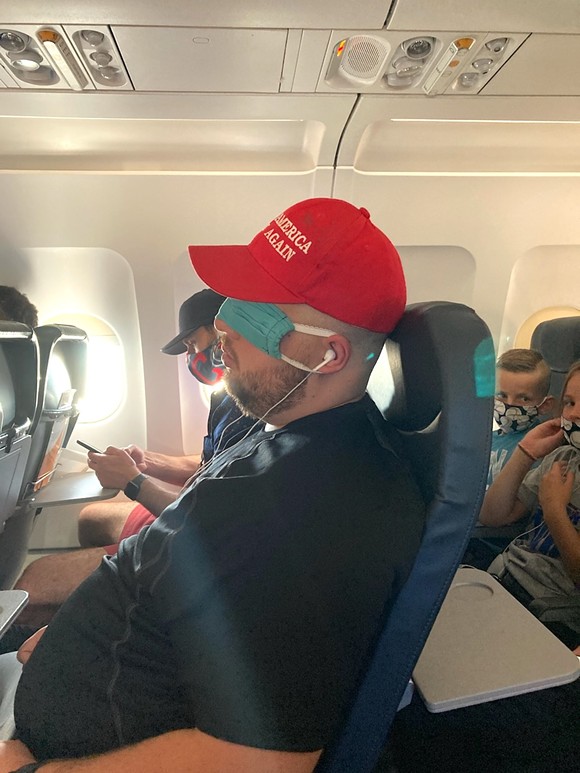 What is really going on in this photo?

Clearly this is a picture of someone wearing a “Make America Great Again” (MAGA) hat, so it’s presumably a Donald Trump supporter adhering to the letter of the law by wearing a mask on a plane, but wearing it in a way that renders it completely useless for its intended purpose. Anti-maskers and some supporters of Donald Trump may see this as a brilliant mockery, albeit perhaps unintentional, of the mask mandates that they disagree with. Pro-maskers and opponents of Donald Trump likely see this as confirmation that Trump supporters are deplorable idiots who don’t understand science and who are putting others at risk in the midst of a pandemic. Both sides of our national political divide would have motivation for passing this photo along to their followers.

It’s hard not to have an emotional reaction to this photo. Yet this is a perfect place to apply the lesson my mother taught decades ago: consider the source. Until more information about what is actually transpiring in the photo, especially who might be manipulating your emotions and for what purpose, judgment should be withheld.

The photo was not originally published by The New York Times or The Wall Street Journal or any other reputable news source, along with an explanation. It just showed up in my Twitter feed, without attribution. Who are the people in the photo, who took the photo, and what are their stories? The main subject certainly appears to be a Trump supporter, but is he actually a Trump supporter? Maybe he is a Trump opponent, playing up to a stereotype that Trump opponents have about Trump supporters. Maybe he is merely a prankster, without strong political views, who wanted to get a reaction from others and see if he could come up with a viral Tweet.

This photo could easily have been staged in about 15 seconds, assuming the person taking the photo is an accomplice. The subject could whip out a MAGA hat and put it on, push the facemask up over his eyeballs, and pretend to be asleep; the accomplice snaps a photo; then both go back to the way they were before the prank. Even if the photographer was not an accomplice, the subject could still have pranked the photographer by getting into that pose, knowing the photographer would take a picture and perhaps circulate it. It appears that everyone involved is a private citizen; but perhaps the photo was staged by state actors, who want to inject some discord into the 2020 presidential election.

Why did the person who took the photo post it on the Internet, and what message was he or she attempting to convey? The photo is just a picture of one person behaving badly, or appearing to behave badly; that doesn’t mean that all people of a certain type behave badly. Once it was posted, who reposted/retweeted it and amplified its distribution, and why? Based on my own Twitter feed, the retweets I saw were from Trump opponents who thought the picture confirmed their low opinions of Trump supporters. Whereas the Russians may not have been involved in taking the photo, they may have been actively involved in amplifying it, to foment unrest and divisiveness among the U.S. electorate.

This photo, by itself, fails the “consider the source” test that I apply to new information. If this photo had been from a reputable source, and was accompanied by a reporter’s story about the main subject in the photo, then I would be able to draw some conclusions about what actually took place. Lacking that, I remain skeptical, to avoid being pranked and manipulated.