Government attempts to control the content on the Internet have proliferated in recent years, both abroad and here in the United States. Thanks to the decentralized architecture of the Internet and the somewhat crude approaches taken by governments and their agents, these attempts rarely succeed in blocking everyone from accessing the censored content. But they do often succeed in making it difficult or impractical for most people to access the content of which the government disapproves.

As an old Internet hippie, who remembers the “wild, wild west” days of the early Internet, and who still believes in the “free and open” Internet (although “free” and “open” are two awfully hard words to define precisely), I’m dismayed when I see the U.S. government, at both the federal and state levels, attempting to censor and control Internet content. We in the U.S. have lost much of the moral high ground that we once had on the subject of freedom of expression. This past week the government of Nigeria banned Twitter inside the country. The U.S. State Department quickly issued a strongly worded condemnation which stated: “freedom of expression and access to information both online and offline are foundational to prosperous and secure democratic societies.” It’s hard for the U.S. to lecture Nigeria about “freedom of expression and access to information” when, due to U.S. government pressure, more and more people and ideas (whether right or wrong) have been banned from the same Internet service, Twitter, that Nigeria banned in its entirety. 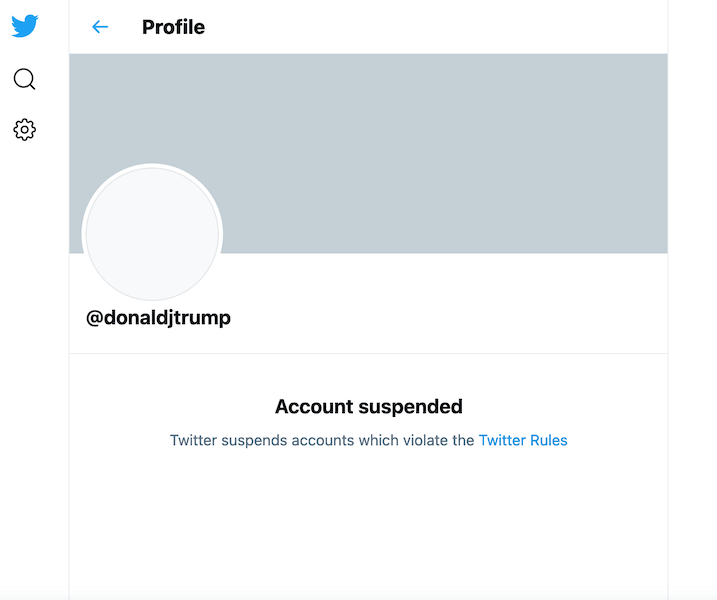 Twitter, Facebook, YouTube and other websites and services which function as platforms are private entities: it should be entirely up to them, without government influence, to decide what content and people to allow on their platforms, with the one exception being unlawful content. No individual has a right to have their content carried on a private entity’s platform. If a platform boots off too many people of one political persuasion, that platform runs the risk of creating a receptive audience for a new platform provider, and seeing their audience shrink.

I realize that there are content creators, with far more followers than me, who earn their livelihoods by posting content on these platforms, and who therefore run the risk of temporary financial hardship if they are booted. Yet that is a risk they’ve chosen to take, and may be failing to mitigate by not arranging for alternative distribution methods. For example, every content creator should have their own website and email distribution list, and should direct their users to it at every opportunity. There is no Internet platform that is so critical that it becomes a “utility”. There are other search engines than Google, and other social media alternatives to Facebook, Twitter, and YouTube. I’ve never had a Facebook account. The more people the major platforms boot, the more competitors they will spawn. I’m not in favor of legislative attempts to force the major platforms to allow everyone on their platforms, or to set standards for content that is to be allowed or disallowed: eventually the free market, left to its own devices, will meet whatever needs exist.

The legislative attempts to rewrite the rules for the large platform companies, or “Big Tech” in general, are a major way that the U.S. government exerts influence over Internet content. So are the repeated Congressional hearings in which major platform companies’ CEOs are summoned to testify under oath. No actual legislation needs to be enacted for the government to exercise its control: the threat of legislation, and public shaming, has an impact. Title II-based “net neutrality”, enacted by the FCC in the late Obama administration and repealed in the early Trump administration, was the most direct recent attempt by the U.S. government to take more direct control of the Internet by putting the FCC in charge, which is why I was so against it.

The sixth of the ten planks of the Manifesto of the Communist Party, written by Karl Marx and Frederick Engels and first published in 1848, reads as follows:

6. Centralisation of the means of communication and transport in the hands of the State.

Fortunately the Internet and the World Wide Web are a huge blow to centralized State control of communications. If I want to read Das Kapital, Mein Kampf, Quotations from Chairman Mao Tse-tung (Mao’s little red book), the Unabomber Manifesto, or The Autobiography of Malcom X, to cite a few well-known works which some or many revile, I can find them on the Internet and the World Wide Web. It’s next to impossible for a government to reach into every nook and cranny of the Internet to find the content they want to suppress. It’s much easier for them to go to the large platforms and exert their pressure there. When governments censor Internet content, users can potentially fight back by using a VPN and seeking out other sources of the forbidden content.

“I read banned books” was once a popular T-shirt when I was much younger. “I read banned Twitter accounts” would be the present-day equivalent, whether in Nigeria or the U.S.