tl;dr: An attempt to name the current economic system in the United States...

The economy of the United States has changed significantly during my lifetime. We used to make more of the products that we consumed, most prominently automobiles. The Rust Belt had not yet experienced its major decline in economic activity and population. The financial and technology industries did not dominate the U.S. stock market. As late as the 1990s, we actually had a federal budget that was in surplus, something that seems impossible now. Income and wealth distribution were more equitable: yes there were rich people, but no one was rocketing themselves into space while others were living in tent cities. The old Yankee Stadium had box seats which were much better than the upper-deck nosebleed seats, but it wasn’t as extreme as the current Yankee Stadium, which seems designed to keep the hoi polloi from mingling with the wealthy.

In the 1970s the State (the term I’ll use for the aggregate of the U.S. government’s local, state, and federal levels) was quite involved in the U.S. economy. President Nixon issued Executive Order 11615 freezing wages, prices, and rents for ninety days in an attempt to control inflation; up until the Carter administration the federal government set airline routes and fares; and the telecommunications industry was dominated by a State-regulated monopolistic behemoth, AT&T. The Reagan Revolution in the 1980s decreased the State’s role significantly, although some changes started under Carter. Most people back then called the U.S.’s economic system “free market capitalism”, in contrast to socialist and communist economies in countries such as the U.S.S.R., China, and India.

State impact on the U.S. economy has been creeping back ever since, compared to what it was when I entered the professional workplace in the 1980s. It used to be that technology startup companies could and did mostly ignore the government; today many startups center their business models around the government. The State’s bailout of Chrysler, one of the three major U.S. car companies at the time, in 1979 received much attention because it was so unusual. Now, with the Wall Street bailouts after the housing bubble burst and the many bailouts and injections of State money into companies during the COVID-19 endemic, bailouts are commonplace and even expected. There have always been politicians who used their office for personal gain, but today the degree to which it's being done, often in the open, seems obscene.

So what should we call the current economic system in the United States? 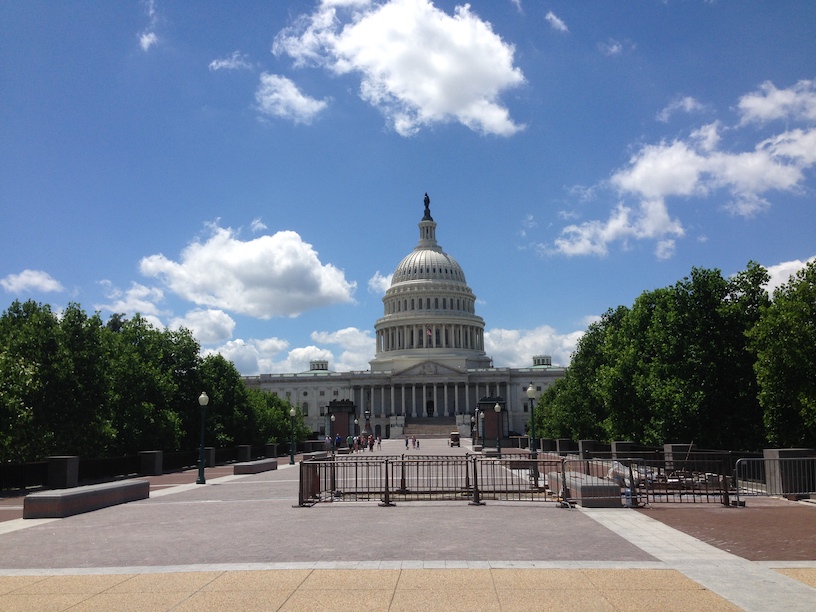 Sorry New York City, but Washington D.C. is the most important city in the U.S. economy

I still believe that we should keep the word “capitalism” in the name, although some say that the U.S. is drifting towards socialism. The State does not own a significant fraction of the businesses in the U.S. economy; private ownership is still the dominant structure. Even in sectors that the State dominates, such as K-12 and post-secondary education, there are still privately-owned alternatives to the State. The word “socialism” has been applied to a wide variety of economic systems, everything from the system the Democratic Socialists of America would like to implement in the U.S.A. to Adolf Hitler’s National Socialism to the Marxism-Leninism system of communism in what was known as the Union of Soviet Socialist Republics. It seems too much to stretch the word “socialism” even further to describe the U.S. today. Let’s stick with the word “capitalism”, then figure out what adjective(s) we should put in front of it. “Laissez-faire capitalism” and “free market capitalism” seem like quaint concepts from a bygone era, and don’t reflect the present day influence the State has over the U.S. economy.

The State does not have to own a business in order to have influence over it and to reap profits from it. Through laws, regulations, licenses, judgments, contract awards, purchasing decisions, and (increasingly these days) executive orders and mandates, the State can have significant influence over how a business operates, what products and services it can bring to market, and even how those products and services should be priced. I once worked at a company where the U.S. government set the retail price of one of the company’s products at $0.00. The profits of any business in the U.S. do not flow solely to the owners. A growing portion of the profits are remitted to the State, in the form of payroll and income taxes that the business pays, and capital gains taxes that owners of the business pay when they sell shares in the business. If these tax rates combine to add up to 100% of the profits of a business, then effectively the State is receiving all of the benefits from the business without being the owner.

Some have proposed calling our current economic system “regulatory capitalism”, since in the past several decades the State has significantly increased its influence over businesses by issuing large numbers of new regulations. While that is true, and regulations are a primary means by which the State exerts influence, that would ignore all the other ways, listed above, whereby the State impacts businesses. Others, upset about the cozy relationship between politicians and some businesses, the amount of lobbying that takes place in state and federal capitals, and the revolving door between the public and private sectors, have proposed the phrase “crony capitalism”. Again, while the feelings may be justified, it doesn’t cover enough of the ways that the State casts its influence over businesses.

I gravitate towards including the word “state” in the name, in recognition of the powerful influence the State has over the base capitalistic economy, without having to specify the various means. One possibility is “state capitalism”, but that is a term with a formal definition that does not fit the United States of 2021. Other possibilities are “state-run capitalism” or “state-controlled capitalism”. Both of those terms, however, describe a greater degree of State influence over the economy than exists today. The government in the United States does not run or fully control the economic system. Rather, it has strong influence and sets the boundaries of the possible and the impossible, from the top level on down.

That leads to my preferred descriptive name for the current U.S. economic system: “state-directed capitalism”. Like the director of a movie or an orchestra, the State has major influence over the structure of the economy, and can tell various players what to do and how to do it. The director does not, however, control all aspects of the system: there is still a certain degree of autonomy and ability to improvise that is left up to the players. The director often chooses to provide more direction to certain players and sections of the overall system, while letting others operate with a higher degree of freedom.

I’ll keep my eyes and mind open for a better name. Meanwhile I think “state-directed capitalism” is the best short, descriptive name for the current economic system in the United States of America in the year 2021.