The problem with PhDs

tl;dr: A PhD degree can saddle the holder with some negative personality traits...

I have several PhDs (the word is used interchangeably both for the degree itself and a person who holds one) in my family. This post is not about them, nor is it based upon my observations of them. These observations come from my interactions with PhDs and MDs in academia and the workplace, and my observations of the behavior of PhDs and MDs in the public sphere, which is especially prominent now during the COVID-19 endemic. You should visualize people such as Francis Collins (PhD and MD), Anthony Fauci (MD), Peter Daszak (PhD), and Nobel Prize-winning economist Paul Krugman (PhD) while you read this post, although I’ve interacted with many people like them throughout my career.

One of the problems with PhDs is that, to earn the degree, PhD students have to specialize in a tiny fraction of the world’s entire base of knowledge, and write a thesis which advances the state of knowledge. Everyone starts their college education as a generalist, taking a broad range of courses, but then students have to declare and focus on courses in a particular discipline (major) to earn a bachelor’s degree. If they pursue a master’s degree, the general studies classes are in the rear view mirror, and they take almost all their classes in their particular discipline. By the time they pursue a PhD, they are studying only one specialized niche within their discipline. There is more than a grain of truth to the old expression that, over the course of their college years, “PhDs study more and more about less and less until they know absolutely everything about nothing.” 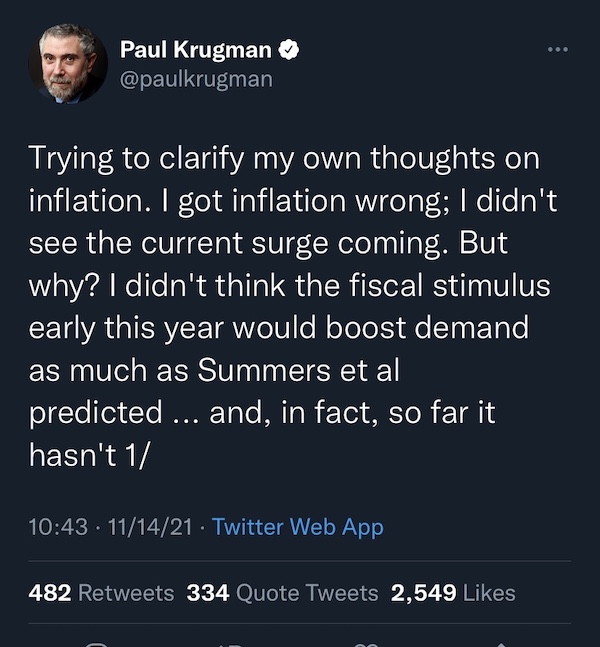 Some PhDs can admit they were wrong, but others struggle doing so

This can lead to hubris and huge errors caused by hubris. The COVID-19 endemic very well may have been caused by exactly this, if it turns out that the virus escaped from a lab in Wuhan performing gain-of-function or other experiments with dangerous, novel viruses in what were unsafe laboratory and field work conditions. Should we trust the science because the people running and funding these programs all had PhDs and were incredibly smart? Not at all, and not any more than we should implicitly trust other scientists and engineers (and I am an engineer myself) in other fields whose practitioners made mistakes that led to the deaths of innocent people.

To generalize (and of course there are many exceptions to these rules), PhDs often are arrogant and lack the empathy to see others’ viewpoints, even when those other viewpoints are more correct. “Seek first to understand, then to be understood”, the fifth and most important of Dr. Stephen R. Covey’s 7 Habits of Highly Effective People, is not how many PhDs behave. Many PhDs lack interpersonal skills: they have high IQs, but low EQs. They often won’t accept direction or course corrections from others whom they view as not being a member of the PhD priesthood. They often won’t ever admit they are wrong, which I consider to be a major character flaw. Furthermore, they can think they have a license to lie to the less-educated general public (the so-called “noble lie”), to get the general public to behave in their desired manner.

I once worked at a company whose controlling shareholder, the son of the founder, felt even more strongly than I do about the flaws of PhDs. He was a salt-of-the-earth guy, who spent his days walking around in mud on his Missouri cattle farm, even though the company I worked for was a high tech company. He had a general rule about hiring PhDs: he wouldn’t. He preferred people with street smarts, common sense, and a strong work ethic.

The MDs and PhDs fighting and insulting each other over various aspects of the COVID-19 endemic often justify their views by claiming to have superior education or experience. It’s very different from the industry I am in, the computer industry. The most successful and wealthy people in my industry tend not to be PhDs: they are more likely to be college dropouts. Steve Jobs of Apple, Bill Gates of Microsoft, Larry Ellison of Oracle, Michael Dell of Dell Computers, and Mark Zuckerberg of Facebook all dropped out of college and do not even have a bachelor’s degree. What matters is not the educational pedigree of the person making a statement, it is the truth of that statement. You learn pretty quickly in the computer industry to judge every statement on its own merits.

Should science be any different? A PhD or MD is often a prerequisite to enter the profession, and to be treated with some amount of respect by the people currently in it. Yet who was the most important, impactful scientist of the 20th century? It was a clerk from the Swiss patent office, who earned a teaching degree, not a PhD in physics: Albert Einstein.