tl;dr: Some tips for choosing a safer route while bicycling and motorcycling...

One aspect of bike safety that I put a lot of importance on is route selection. This applies to both bicycling and motorcycling, because a primary aim in both is to encounter as few cars (and trucks and other large vehicles) as possible. Cars are the enemy.

Choosing a good route can significantly reduce your chances of getting into an accident. If you encounter 50% fewer cars on the route you choose versus a more heavily-trafficked alternative, you’ve reduced your chances of a collision with a car by 50%. The safety improvement may even be greater than that because bad things happen when traffic is congested. Drivers become irate and distracted, and make more abrupt movements to gain a few seconds advantage. There are more moving objects for them to notice, which decreases the chances of them seeing a biker. The goal of route selection is to avoid getting into these situations in the first place.

The large majority of the miles I put on my bicycles occur on dedicated bicycle (or “multi-use” as they often are called these days) paths. Aside from the very occasional truck or street sweeper doing maintenance on the path, this allows me to avoid cars and other vehicles entirely for most of my bicycling. I absolutely would not do as much bicycling as I do, typically between 70 and 100 miles a week, if I didn’t have access to a good bicycle trail system. 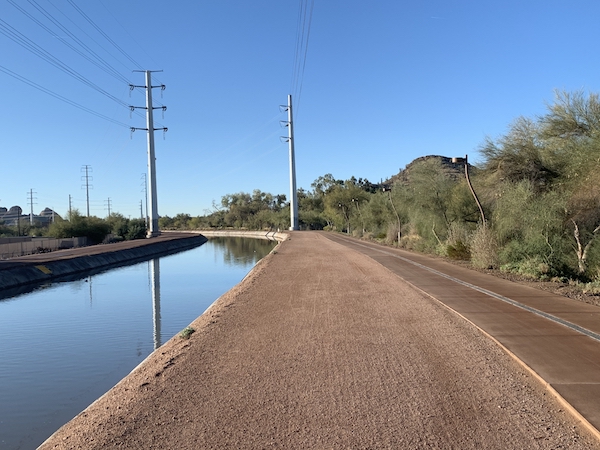 An ideal bicycle route: the Arizona Canal between Scottsdale and Tempe

While I was on my interview trip for the job I ultimately took which moved me and my family to Arizona, I stopped by a bicycle shop and asked one of the workers where people bicycled in the Valley of the Sun. That’s where I learned about the incredibly large system of bike paths alongside the canals that traverse the valley. You can literally ride from one end of the valley to the other, a good 60 miles away, on the canal system. This was a major selling point for moving to the valley. During my years here so far I’ve lived just blocks from a canal, so it is super easy for me to access the entire system. When I ride to work, a bit more than nine miles, almost all of it is on dedicated bike paths, except where I cross Tempe Town Lake on a wide dedicated bike lane on a bridge. It would be hard to make it much safer.

DuPage County, Illinois, where we moved from, also has a great dedicated bike path system. A lot of it is also alongside water, in particular various branches of the DuPage River. Flooding is a bit of an issue in Illinois, but even here in Arizona some of the paths are in greenways that function as water retention areas during heavy rainfall, which usually happens a few times a year. Both systems provide much better, safer biking than our prior home in the hills of Portland, Oregon. Portland is known as a bike-friendly city, but once you get up into the hills west of downtown, there are no good bike routes. We had to haul our bikes on a car to get to a good spot to bicycle. Our kids did not learn how to ride bikes until we moved to Illinois and it became much easier to go bicycling.

A dedicated bike path system functions as a bike-only highway system that occasionally intersects with the car highway and road system. Often I’m amazed when I pop up from the bike system and realize where I am on the car system, because the visual perspectives and paths taken to reach that point are entirely different.

While I always seek out dedicated bike paths, I will occasionally choose routes with bike lanes on roads shared with cars. China does a much better job than the U.S. in building bike lanes in roads because often there is a physical barrier such as a median strip with curbs separating the car and the bicycle traffic. A stripe of paint isn’t going to stop a car from hitting a bicyclist. But there is one smart aspect of the bike lanes here in the Valley of the Sun: often they are on less-traveled roads that run parallel to other roads with more car traffic. So while there is some car traffic to deal with, there is a lot less than if they had put the bike lane on a busy road. 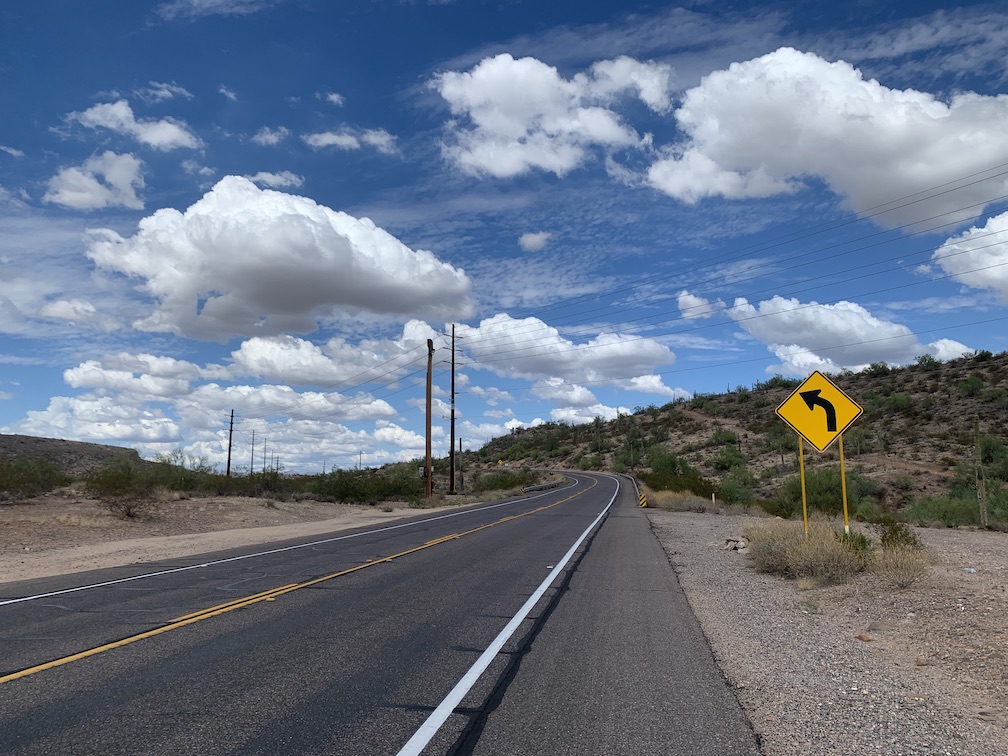 I apply this lesson while motorcycling. When I am in town, instead of taking the major thoroughfares that I would take when I am driving a car, I seek out less-traveled roads that get me to the same destination. Often these are the roads with the bike lanes on them. The bike lanes discourage cars from taking those roads, which is great for a motorcyclist that wants to avoid cars. So I use the bike lane system for both bicycling and motorcycling.

The best roads for motorcycles, of course, are the most deserted ones with the fewest intersections. Most of the motorcycle riding I do consists of me traversing the necessary streets and roads in populated areas in order to reach deserted country roads, which are both the safest and the most fun roads to ride. It’s not possible to avoid cars entirely, but you can significantly cut down the number you encounter by choosing a good route and destinations for your ride.

Biking is not intended to be the fastest way to get from Point A to Point B, it’s supposed to be the most fun way. So don’t worry about taking the shortest, most direct route. Take a safer route instead. As Supertramp commanded when I was a teenage biker: Take the Long Way Home.