tl;dr: A return to the commingled timelines of The Peripheral’s world that left me wishing for more...

Agency is Gibson’s long-awaited followup to The Peripheral, and I do recommend reading The Peripheral first if you are just discovering these books. I’m a big fan of the method that Gibson uses for having his characters travel in time: instead of moving atoms between different time periods, only information is moved. This requires the use of a peripheral body, bot, or drone in the destination time period that can be used by the time traveler to achieve agency, or the ability to act. Every time a time traveler shows up in the past, an alternate “stub” is created that forks away from the path that history took without that time traveler appearing. If time travel ever becomes reality, I think this is the most likely way it will happen.

Agency is both science fiction and alternative history, with its representation of London and the world in the year 2136 alongside a recent past world in which Hillary Clinton beat Donald Trump (never named but clearly alluded to as a menacing force) for the Presidency in 2016, and there was no Brexit. Even though Gibson lives in Vancouver, British Columbia, Canada and didn’t get a vote on either of those issues, they matter tremendously to him, as anyone who follows Gibson on Twitter knows. To Gibson’s credit, a Hillary-led U.S. is not a “they lived happily ever after” scenario: there still are threatening situations to be solved. The primary situation described in Agency is actually different from anything that happened during the Trump administration. I think this is representative of the way world events would actually unfold in that alternate path of history: others in the world behave differently depending upon who is leading the U.S. as Commander in Chief. 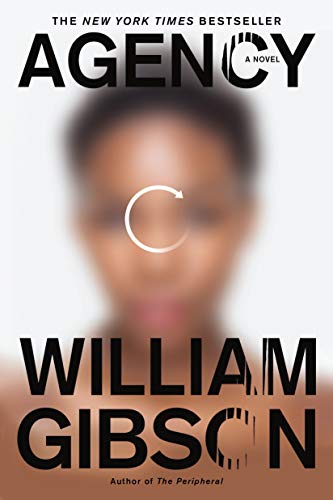 Occasionally mentioned but never fully described is a major event that happens in between those two time periods: the “jackpot”, in which a cabal of criminals called “the klept” fully takes charge of the former Western democracies. “Klept” is short for kleptocracy: envision Putin’s oligarchs and their puppets in the Trump administration (according to Gibson) ending democracy (again, Gibson’s political opinions are not hidden) and acquiring the wealth of the world (hence the term “jackpot”) after 80% of the human population dies off. The klept runs the world outside of China: it is a hereditary authoritarian government, rooted in organized crime.

The depopulation is caused by global warming and ecological collapse after a “wave of pandemics”. I’m not as pessimistic as Gibson about the future, although I definitely think there will be more pandemics, given the ease and frequency with which scientists can create new pathogenic viruses in the lab. Viruses are far from the only lifeforms to be modified in Gibson’s view of the future. Bioengineers are going to be very busy inventing new lifeforms and modifications to lifeforms; the same for computer scientists and artificial intelligence.

The action in Agency proceeds at a rapid clip, and not just when the main character is motoring around the Bay area on the back of a Harley. Gibson likes to throw the reader into a scene without a lot of background or foreshadowing. This technique, coupled with the continually altering timeframes and perspectives, causes the reader to have to construct some of the storyline by tentatively connecting events and characters together. It’s further complicated by the many ways that the characters can and do communicate with each other, via audio and video feeds as well as text. Reading Gibson is a workout for the brain, which I appreciate.

Agency feels to me like the second book in a trilogy, or perhaps a longer series. Because The Peripheral precedes it, it’s not quite as impactful a book. It does provide a bit more detail on the future world that Gibson envisions. I would still like to know more about the jackpot and the klept, especially how they arose. Or maybe that is Gibson’s point: mankind is still writing this portion of the storyline as we live through it. Perhaps he wants us to read today’s newspapers to learn how the jackpot and the klept come to be.