The failures of the elites: net neutrality

tl;dr: No, it was not the end of the Internet as we know it when Title II-based net neutrality was repealed...

Having spent almost all of my career in the Internet industry, the “net neutrality” issue was very important to me and one in which I knew far more about the technology than almost anyone speaking about it in public. Although there was much blather about the “free and open” Internet, which everyone claimed to support, the issue actually boiled down to this: should the United States Federal Communications Commission (FCC), an unelected body of regulators, act unilaterally to subject Internet Service Providers to the Communications Act of 1934, in particular a set of regulations known as “Title II”, which was in the past used to regulate landline phone monopolies?

Title II-based net neutrality was a concept developed by legal activists (see Tim Wu, below) when they were unable to get Congress to act by passing a net neutrality law. It was put in place by a 3-2 vote of FCC commissioners at the tail end of the Obama administration, and then repealed by a 3-2 vote during the Trump administration. Amazingly, although it was widely predicted that the repeal would be “the end of the Internet as we know it”, somehow it has survived and thrived.

The elites who got it wrong:

Who got it right: 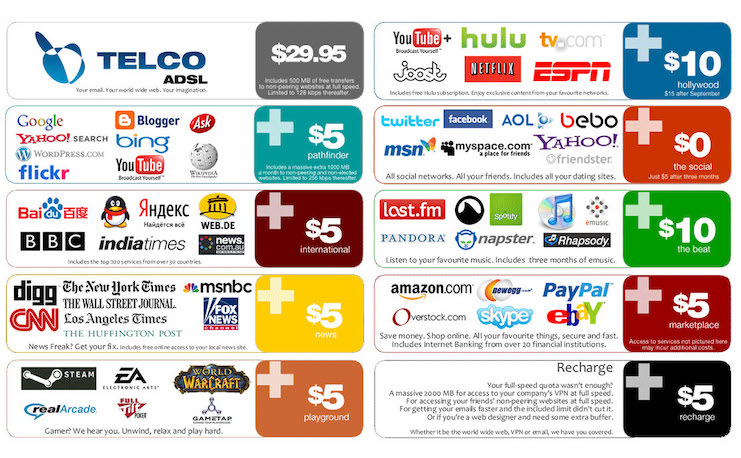 What the elites said would happen:

According to the uproar at the time, the repeal of Title II-based net neutrality was an Armageddon moment for the Internet in the United States. The ISPs would finally be able to block websites and prevent users from reaching them unless an additional toll was paid to the ISPs, who would become fabulously wealthy from all the additional revenue. With their maniacal focus on “cable company fuckery”, to use John’s Oliver’s oft-repeated phrase, the elites claimed the ISPs would implement Internet pricing models that looked like cable TV pricing models: a basic tier that provided access to a very limited number of sites, and then additional monthly payments to be able to access additional portions of the Internet.

The richest sites would have the greatest ability to pay for “fast lanes” to provide a high-quality user experience, which would make them more dominant. Less popular websites and start-ups, with no ability to pay for fast lanes, would go out of business. Internet innovation would slow to a crawl. Venture capitalists and entrepreneurs would have to seek out other markets for their time and money, as the Internet stagnated. Poor companies, poor people, and the disadvantaged would lose the voice they used to have on the Internet.

A widely conveyed fear was that the Internet would actually get slower, ending decades of speed improvements. Pages would load “one word at a time” or about as fast as a user could read each word. Networking veterans such as myself know that this is the speed of a 300 baud modem, or roughly 300 bits per second (bps), or 0.0003 Mbps. A popular meme on Twitter was to create a long, vertical Tweet with one word per line, showing how slow the post-Title II Internet would be: see the ACLU’s Tweet below.

What I said at the time:

In my December 9, 2017 post titled The dangers of the FCC’s TitleII Internet power grab, I argued that “people who don’t support our current President should be thrilled that Trump’s FCC is willing to give up its control over the Internet. If the FCC is forced to keep those powers, some real damage to the ‘free and open’ Internet can be done in the years ahead.”

I was much more concerned about the government using Title II to censor and block the Internet than I was about ISPs doing so in the absence of Title II. I had worked with ISPs for years, and knew that it was not in their DNA, nor in their business models, to do widespread blocking of access. The few incidents of anti-competitive ISP bad behavior were best dealt with individually, as was already being done. There was actually competition among ISPs, and more coming with higher-speed broadband and satellite technology, which would continue to force generally good behavior by ISPs.

Title II was an incredibly blunt instrument, unsuited to the technical intricacies of traffic management policies and what should be done when ports in Internet routers become congested, as they occasionally do. Maybe there actually is a reason to have high-priority fast lanes, for example to provide high-quality videoconference for distance learning or telemedicine, or low-latency gaming, although the market for a higher “Quality of Service (QoS)” experience delivered over the Internet has never been proven.

I knew that the Internet would continue to get faster, thanks to technology (e.g. greater use of fiber optics) and ISPs willingness to invest. That willingness to invest would be increased if the ISPs could be freed from the burdens of complying with Title II. If, on the other hand, you wanted to freeze the Internet in place, just like the old landline phone network was barren of innovation, Title II was the way to do so.

Nothing happened, initially, when Title II-based net neutrality was repealed. None of the fears voiced by net neutrality advocates came true. There was no blocking of websites and no new tiered, premium pricing to Internet service plans. Internet “fast lanes” have not appeared.

The Internet in the United States continued to get faster and cheaper, as measured by price per Megabit per second. The U.S. became a world leader in the rollout of 5G mobile broadband. Starlink satellite-based Internet service rolled out. The U.S. actually rose in the world rankings of average download Internet speed to number four worldwide, according to Statista. In fact, Internet service was so good that it was possible for school districts in the U.S. to quickly switch to remote learning (“Zoom school”) when the COVID-19 endemic started, although that mitigation has had severe negative consequences for students.

It’s quaint, now that the Twitter Files are public and we’ve seen in detail exactly how various U.S. government agencies and personnel censor online speech, to read Free Press’s concern that “without Net Neutrality, ISPs could block speech and prevent dissident voices from speaking freely online”. The main threat to free speech was never the ISPs, it was always the government. It always is the government, as anyone who has studied history knows. Joseph Goebbels didn’t work for the phone company.

What the elites got wrong:

The elites forgot how both technology and markets work. Technology continually advances, as long as it is not prevented from doing so, so statements that the Internet would slow down were almost guaranteed to be wrong the moment they were uttered. The understanding shown of modern Internet architecture was almost nonexistent. Any company that wants to deliver large amounts of high-quality video content to users already needs to spend a considerable amount of money, not to buy a “fast lane” to users, but to deploy or rent capacity on specialized edge servers located close to end users. So with or without net neutrality, money is required to scale up. But even a small company can start with a modest AWS bill, and grow over time as usage grows.

The market turned out to be more dynamic than the elites thought. Competition works best when it is competition among providers with different networks, and that’s the case today with Internet service being offered over the old landline phone network, cable TV networks, fiber optics in some places, fixed and mobile broadband, and now satellite. The ISPs were actually always responsible corporate citizens who employed many members of disadvantaged communities, and had no desire to arbitrarily block people for anything other than failing to pay their monthly bills.

Giving the government more power over the Internet, to ensure that it would be “free and open”, was exactly backwards.

Related post: The failures of the elites: Cryptocurrencies and FTX