Bill Veeck's masterpiece is Veeck as in Wreck. If that book left you hungry for more, or if you have a serious interest in baseball history, them you will also enjoy Veeck's The Hustler's Handbook (THH). 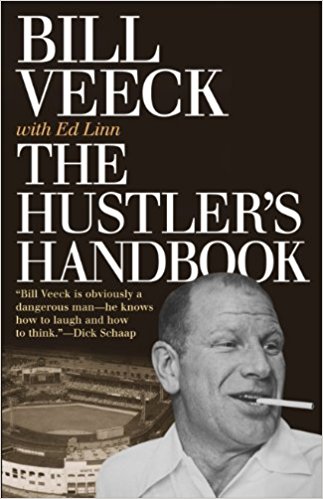 The most significant historical content in THH is fully contained in Chapter 11. As the owner of the Chicago White Sox in 1959 and the early sixties, Veeck claims to have found (in a dusty storage room deep in the bowels of Comiskey Park) a diary kept by the White Sox's secretary in the critical years of 1919 and 1920, as the Black Sox scandal was unfolding. Veeck details the newsworthy revelations from the diary, and matches them up to the generally accepted storyline of the scandal. The diary provides an especially good behind-the-scenes glimpse of how the White Sox and the powerful men who ran Major League Baseball at the time were maneuvering to protect their interests at the expense of the truth.

The diary also contains a note accusing a Cubs player of throwing the 1918 World Series. This accusation became the basis of Sean Deveney's book The Original Curse, which assembles evidence in support of that claim. So Veeck in THH has definitely contributed to the historical record of this very important event in baseball history.

The rest of THH is much more light-hearted in tone. Veeck writes in THH as though he were teaching a class of students how to become a hustler and make money as the operator of a baseball team. As Dick Schaap says on the cover of the volume I read, Veeck "knows how to laugh and how to think", which is why THH is so enjoyable. Some of the lessons are timeless and some are dated, but readers with an interest in baseball history should enjoy most of his insider tales about topics such as CBS buying the Yankees, the Braves departing Milwaukee for Atlanta, and the demise of the independent minor leagues. Veeck tells it like it is, in humorous, direct language that ultimately paints a portrait of a free-spirited man who loved entertaining people.