My time and Bill Veeck’s time in the Chicago baseball scene did not overlap (Veeck died in 1986), yet Veeck had such a major influence on the game that people still talk about him today (he even appears to have a Twitter account). Veeck must be considered one of the most innovative and influential owner/operators in the sport’s history. Like, most famously, Harry Caray, Veeck had significant experiences with the clubs on both sides of Chicago, although Caray is popularly remembered as a Cubs person while Veeck is likewise remembered as a White Sox person. The baesball novice's image of Bill Veeck is that of a cheap carnival promoter who once sent a midget up to bat. Many also know that Veeck invented the exploding scoreboard which would go off after a home run, an idea still being copied today, with the most garish example residing in the Miami Marlins new stadium (by the way Veeck owned the Miami Marlins in the mid-1950s when it was a AAA team). Destroying this simplistic image of Veeck and presenting a fuller portrait of all that Veeck did for the game is the main aim of this book, and Dickson does an admirable job.

A sizable portion of the book, and Veeck’s influence on the game, has to do with race and the integration of Major League Baseball. Veeck was born into a well-to-do family, raised in a wealthy Chicago suburb, attended a private college, and his father Bill Veeck Sr. was already involved in the sport (Sr. became President of the Chicago Cubs), which gave Jr. a huge head start. Yet Veeck was very much a man of the people and a strong supporter of the civil rights movement, the downtrodden, and anyone he felt was not getting fair treatment in society. When Veeck rose to prominence in baseball, as Dickson chronicles, he took many actions to help bring black players into major league baseball (most famously Larry Doby, Satchel Paige and Minnie Miñoso, but also many others) and to get them equal treatment. 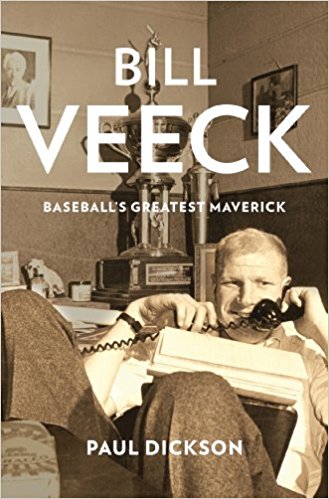 Veeck was more than an innovator and a visionary: because he battled the baseball establishment, he also earns the title of maverick. He was right and early on many of the changes that have taken place in baseball over the past sixty years, including integration, free agency, baseball on the west coast, expansion, greater parity in revenues and the sharing of television revenue, as well as two areas that are still playing out: the need to operate under one set of rules (there is now a single set of umpires, but the DH issue is yet to be resolved) as well greater local rivalries, including more games between the two teams in the same city (e.g. Cubs vs. White Sox, or Mets vs. Yankees), which may come via a future major realignment and breakup of the two leagues.

Veeck Jr. and his father also were well aware of the pernicious influence of gambling on the sport, which is a growing challenge for all sports as online and legalized sports gambling grows in the U.S. Veeck unearthed and published, in The Hustler’s Handbook, evidence that the 1918 World Series between the Cubs and Red Sox may have been fixed, a year earlier than the infamous Black Sox scandal, the subject of the book and movie Eight Men Out. Sean Deveney fully explores the evidence for the fixing of the 1918 World Series in the book entitled The Original Curse. Dickson also prominently mentions this important yet oft-overlooked incident.

Dickson presents a flattering portrait of Veeck, but he would argue strenuously that this is because Veeck was indeed a great historical figure. Dickson conducted many interviews for the book and researched a wide swath of newspapers and periodicals for news reports of incidents in Veeck’s life, all of which is thoroughly documented in the footnotes at the end of the book. In the one appendix he thoroughly debunks an earlier semi-scholarly article claiming that Veeck lied about his attempt, before Jackie Robinson broke the color barrier, to buy the Philadelphia Phillies and make it an all-black team, somewhat following the model of Veeck’s associate Abe Saperstein, who owned the Harlem Globetrotters.

Even with all the scholarly thoroughness, Dickson’s book is eminently readable. The challenge it faces, about which nothing can be done, is that Veeck himself wrote two autobiographical books about most of his major experiences in baseball, the well-known Veeck - As in Wreck, and The Hustler’s Handbook. I would still recommend both of these books above Dickson’s book for someone interested in learning about Bill Veeck. Reading a first-person autobiography is just naturally more engaging that reading a third-person biography. Dickson’s book necessarily covers many of the same stories and events already explained in Veeck’s books, and since Dickson believes that Veeck was telling the truth, there is nothing in Dickson’s book that is in strong opposition to Veeck’s version of events. Dickson’s book does fill in some details, as well as covering events that happened after Veeck wrote his books, such as Veeck’s second tenure owning the White Sox and the very end of Veeck’s life. I would recommend Dickson’s book after first reading Veeck’s two books, which means that Dickson’s book will appeal to readers who are very interested in the life of baseball’s greatest maverick, Bill Veeck.