tl;dr: It’s hard to see the White Sox staying in Chicago through the upcoming changes to the franchise...

Pitchers and catchers are about to report to Spring Training, so it is time for my annual baseball post. Last year I wrote a pessimistic piece about the possibility of major league baseball in Portland. I’m following that up with a pessimistic piece on the long-term presence of major league baseball on the south side of Chicago. Next year I hope to get back to highlighting some positive attributes of America’s pastime 😁.

Although I’m in Arizona now, following and rooting for the Diamondbacks, I expect I’ll always have a soft spot for the Chicago White Sox. I chose them as my team when my family moved to Chicagoland in 2005, and was rewarded with the team’s first World Series championship in 88 years. I was a partial season ticket holder for the years 2008 through 2018, when we moved to Arizona. I attended both home games of the last playoff series the White Sox played in, back in 2008 against the Tampa Bay Rays. I vividly remember consoling my youngest daughter in the stadium after that final playoff loss.

With distance comes perspective. From sunny Arizona I can see several troubling issues on the horizon that could very well cause the franchise, one of the charter franchises in the American League, to depart Chicago.

The White Sox are owned by a partnership headed by 83 year-old Jerry Reinsdorf as the general partner. The partner with whom Reinsdorf originally bought the team, Eddie Einhorn, passed away in 2016. By all accounts Jerry Reinsdorf is a huge baseball fan going back to his childhood in Brooklyn rooting for Jackie Robinson and the Dodgers, although he was also smart enough to become owner of the Chicago Bulls NBA franchise. When the White Sox won the World Series in 2005, there were reports that the one World Series title that he won as owner meant more to him than the six NBA championships the Bulls won during the Michael Jordan era, although Reinsdorf publicly quashed those rumors.

One rumor that Reinsdorf hasn’t bothered quashing is that it is much more financially lucrative to own Chicago’s one NBA franchise than the second of Chicago’s two MLB franchises. Family-owned sports franchises often are passed down among the generations, and Reinsdorf has installed his son Michael as the #2 executive for the Bulls. He has not done so for the White Sox. Instead, as this Chicago Tribune article states, he recommends that the White Sox be sold when he passes, an event that will happen at some point in the years ahead.

There’s always a chance that the family could retain the stake in the White Sox. There’s a chance that some of the other smaller, limited partners could step up and write some big checks to keep the team in Chicago, or that a new majority owner could be found. But if the family wants to maximize the return on Jerry’s original investment, their stake will be sold to the highest bidder, who may have other plans for the franchise. 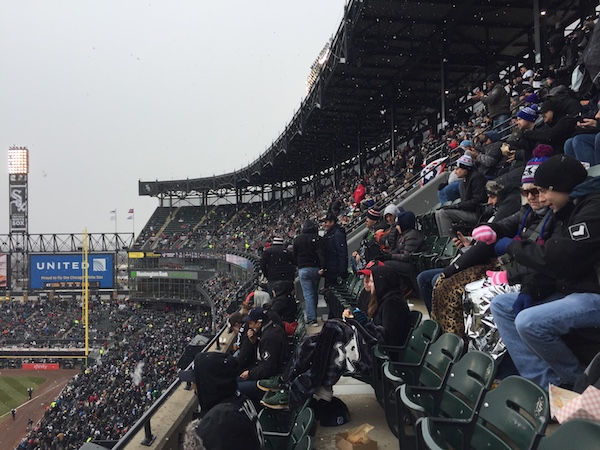 I’ve written about the Illinois Exodus, which is now into its sixth year. Chicago is also losing population, and the losses are more severe on the south side, where the White Sox play, than the wealthier north side, where the Cubs play. The gang violence on the south side of Chicago is well publicized, although I’ve never experienced any incidents while attending White Sox games.

With fewer people on the south side, and in the city, and in the state, there are fewer potential ticket-buying fans. Major League Baseball franchises need to sell more tickets than other professional sports to be financially viable, which is why no MLB franchises are located in small cities such as Buffalo or Oklahoma City. Only four metropolitan areas in the U.S. currently have two MLB franchises: New York, Los Angeles, the San Francisco Bay area, and Chicago. With Houston poised to overtake Chicago over the next decade to become the nation’s third most populous city, would the White Sox be better off being the second team in Houston, or the third team in Texas?

Some White Sox fans, especially younger ones, do not realize how close the White Sox came, in 1988, to becoming the Tampa Bay White Sox and moving to the indoor stadium that the Tampa Bay Rays currently occupy. The short story is this:

After buying the White Sox, Reinsdorf and Einhorn determined that the original Comiskey Park, opened in 1910, was falling apart and would have to be replaced. This was in the heyday of government-funded stadiums, and a baseball stadium was already under construction in St. Petersburg, Florida, which needed an MLB team to occupy it. Reinsdorf threatened to move the White Sox to Florida unless the state of Illinois built him a new stadium for the White Sox. At the last possible minute, the politicians agreed to do so. That stadium exists today: it is Guaranteed Rate Field, the home of the White Sox. It is still owned by the state, and the state is still on the hook for making improvements to the stadium.

Meanwhile, the financial conditions of the state of Illinois and the city of Chicago have degenerated considerably, while new stadiums have gotten more expensive. Teams are also spending fewer seasons in relatively new stadiums before building another one: the Texas Rangers and Atlanta Braves have recently moved into new stadiums, even though their prior stadiums were younger than Guaranteed Rate Field.

If the White Sox were to decide they need or want a new stadium, it is highly unlikely the state of Illinois or the city of Chicago would be able to come up with any money. The Ricketts family, after they bought the Cubs, tried to get Chicago to pitch in on renovations to Wrigley Field and threatened to move to suburban Rosemont, but the city refused. The city and state are broke, so any municipality that can offer them a new stadium is going to attract strong interest from the White Sox.

As the 2015 Facebook Fandom Map shows, the White Sox could lay claim, within city and county limits, to being the more popular of Chicago’s two MLB teams. But in 2016, the Cubs finally won the World Series after a 108-year drought. That boosted the team’s popularity everywhere. For decades the Cubs have been more popular than the White Sox on a national basis, thanks to the years when afternoon games from Wrigley Field were televised nationwide on cable TV superstation WGN. Plenty of tourists visit Wrigley Field every summer seeking a taste of baseball as it used to be, while far fewer venture to the south side.

Meanwhile the White Sox have been mediocre or worse since their last playoff team of 2008. They couldn’t build a playoff team around Chris Sale, who won the World Series after getting traded to the Red Sox. Their last winning season was 2012. A multi-year rebuild is still in progress. The White Sox need to win in order to attract fans; attendance has averaged fewer than 22,000 fans per game since that last winning season in 2012.

Maybe the rebuild will start bearing fruit. Maybe attendance will rebound. Maybe the team’s majority ownership stake will pass into friendly hands when Jerry Reinsdorf passes. Maybe Illinois and Chicago will stop losing population. Maybe the new owner will someday build a modern retractable roof stadium on the south side. Or maybe Las Vegas or Texas will make the White Sox an offer they can’t refuse.