A decision to outsource manufacturing to China, part four

More Frequently Asked Questions that I get, about outsourcing manufacturing to China:

Why is China winning in the electronics assembly business?

It’s much more than just cheaper labor; in fact there are certainly other places in the world, both back in 2007 and today, that pay lower hourly wages than they do in China. China and other Asian countries such as Japan, Taiwan, and South Korea all made it a priority to build up their electronics and semiconductor industries over the decades. There are many more component parts made in China and Asia, everything from simple resistors to chips to flat-panel display screens. If you wanted to do final product assembly in the United States, you’d have to ship most of the parts from Asia over to the U.S. It’s easier just to ship the final, assembled product.

Furthermore, the scale of the electronics manufacturing facilities in China and Asia is far greater than anything you see in the United States, which provides a major advantage in economies of scale. We just don’t have electronics plants in the U.S. that employ 250,000 or more workers, most housed in dormitories. If someone wanted to build a factory of that size here, it would take an army of lawyers and many years to obtain all the land, file all the environmental paperwork, and fight off all the inevitable court cases. U.S. workers, myself included, wouldn’t want to be housed in dormitories.

China is an authoritarian country, and that comes with both advantages and disadvantages. The Chinese government has made it a priority for the country to become a world leader in electronics manufacturing, and they’ve succeeded. For better or worse, our government puts many more restrictions on manufacturing activities. In the end, it’s a matter of national will and governance methods, as well as worker expectations. 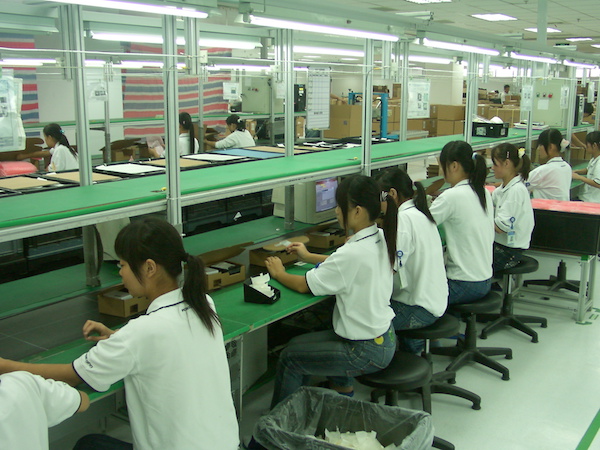 Assembly line workers at a Foxconn plant in Songjiang, China

A few years after Westell started manufacturing in China, one of our contract manufacturers, Foxconn, had several well-publicized episodes of worker suicides, although not at the Foxconn campus where Westell’s products were built. The workers that I saw on the assembly lines appeared to be in generally good spirits, with a high degree of camadary and the occasional joke and smiles. Of course when I was there the big bosses from the U.S. were visiting, so everyone was on their best behavior.

The suicides didn’t surprise me, however; we have worker (and manager) suicides here in the United States, too. The assembly line workers were mostly in their 20s; many of them had traveled long distances from the rural farming villages where they grew up and where their elderly relatives still lived. I’ve seen the worker dormitories, and they are bare bones; they would be a huge step down for U.S. workers. However, when combined with the working conditions and pay, it must be an improvement over life in a rural Chinese farming village. The workers are removed from their extended families, which can cause mental hardships. Some good books I’ve read which describe what life is like for these workers are the China-based books of author Peter Hessler, including Oracle Bones and River Town.

In the 2007 timeframe, the managers and most of the skilled professionals that we dealt with in the contract manufacturers were Taiwanese, not mainland Chinese. Taiwanese companies such as Foxconn and Askey used to make all their products in Taiwan, but that became uncompetitive when China started manufacturing electronics products for the world market. So they shut down their own Taiwanese factories, built new factories in China, and then started undertaking contract manufacturing work for U.S. companies, to help them also undergo the transition to Chinese manufacturing.

The Taiwanese managers and professionals have a tougher life than their U.S. equivalents. They spend an awful lot of time away from their Taiwan-based families because of travel to the factories in mainland China. Some of the top managers are rumored to have two families, one for when they are in Taiwan and a second when they are in China. Life in the factory complexes in China is not all that wonderful for them, and there’s not much to do outside of work. They’d prefer to be home in Taiwan. 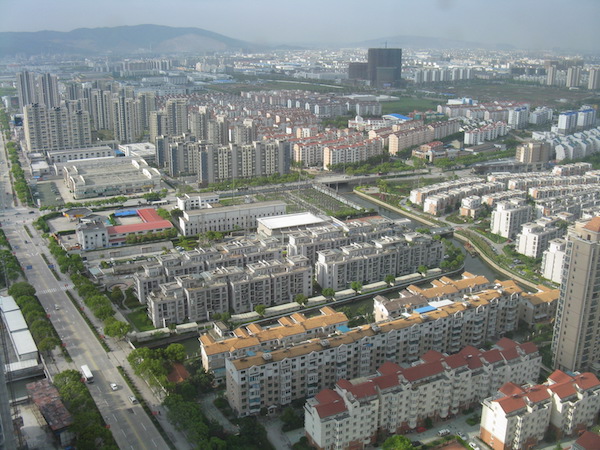 Does China have environmental problems?

Yes. The air quality is not up to U.S. standards, in my experience. I’ve been in mainland China, mostly in the Shanghai area, on various business trips for about six weeks of my life, and I’ve never once experienced a crystal clear, sunny day. It’s usually somewhat overcast, with some combination of clouds, humidity, and smog. I was surprised that the 2008 Summer Olympics were held in Beijing, but not surprised that China shut down factories in the area to clear the air for the games themselves. Very wealthy Chinese and Taiwanese, including some people I dealt with, will often have second or third homes somewhere far from China to escape from the pollution and have a better quality of life for themselves and their families to enjoy at least some of the time. Vancouver, Canada, is a popular destination.

Is China on the rise and the U.S. fading?

Without a doubt, yes. The growth in China is amazing to see firsthand. No words, my own included, can accurately convey it. Whole new cities are being built in China. It’s shocking to see how many high rises are under construction or recently built. When I was a Chicago White Sox season ticket holder, the person who had the seats behind me was a principal in a major Chicago architecture firm; almost all of his firm’s work was in China. Shanghai has many amazing modern skyscrapers, the tallest of which dwarf those here in the U.S. GDP and living standards are rising much faster in China than they are here. Of course, the starting point was much lower.

China has a much greater population than the U.S., so it would not surprise me at all if the Chinese economy some day exceeds the U.S.’s in overall size. What matters most, however, to people’s quality of life, is per-capita GDP and other non-economic factors such as environmental quality and personal liberties. China’s authoritarian government has provided advantages in turning the country into a giant manufacturing powerhouse, but that will eventually hit its limits. Authoritarianism is a major disadvantage in the creative professions, and will hold China back from achieving the same per-capita quality of life enjoyed by most in the United States and Europe. So while China may grow to become a bigger economy than the U.S., it won’t be a better place to live unless there is fundamental reform in the government’s structure. It’s hard to see that reform happening anytime soon, not with one party firmly in control.

Nope. I always knew those prices did not include the full costs of safely building and delivering the products.

Am I happy to be out of the hardware business?

Yes! See Nothing but icing.