tl;dr: Blue pill consumption is on the rise...

I’m not a huge fan of the 1999 movie The Matrix. I’ve only watched it from beginning to end once. I found one of the premises of the plot to be too far-fetched: that a superior intelligence would keep a large number of humans alive in pods to harvest their energy. Physics tells us that humans are not great sources of energy: they actually require lots of energy to stay alive. That flaw didn’t prevent the movie from becoming part of popular culture. Today it is quite common for people to mention being “red pilled” or “blue pilled”, and to use the term “the matrix” to refer to an all-encompassing virtual reality.

The Matrix is far from the first work of science fiction to explore the concept of virtual reality. It is predated by Neal Stephenson’s Snow Crash, which coined the term “metaverse” for a networked, computer-based virtual reality world that people can enter and leave, and which they may prefer to actual reality. Facebook founder Mark Zuckerberg co-opted Stephenson’s term for the new name for his company, and has embarked upon a bet-the-company initiative to build a metaverse world in which people will actually want to spend time and money.

As someone who enjoys living in the real world, I am skeptical that Zuckerberg’s metaverse will succeed. But I also realize that, given my age, I am not the target market for Zuckerberg’s metaverse. Looking around at how others, especially younger people, behave, I am starting to wonder if I am a member of one of the last generations to prefer actual reality to virtual reality. 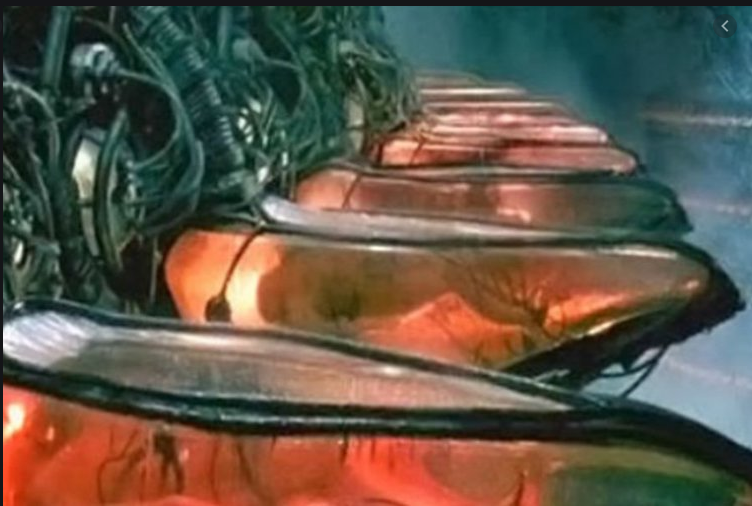 Considerable suspension of disbelief is required by this scene: human beings are not good sources of energy

People are spending more time than ever in front of screens, a trend that has been accelerated by the COVID-19 endemic. Government-mandated remote schooling and working from home forced huge numbers of people to substitute an online virtual reality version of their school or workplace for the real thing. Those changes are now permanent for some folks, and a part-time alternative for many more. After wondering what returning to the office would mean for me personally, it appears that remote work is a permanent fixture of my world and the software industry. I will probably never again work five days a week in an office filled with coworkers. The company I work for is far from an outlier: when I hop onto video conference calls with people at other companies, most of them are also working from home.

I’ve long believed that, in the battle of transportation versus communication for bringing people together, communication would win out. It’s a lot easier, faster, and energy efficient to have a business meeting over video conference, even though the experience is not as powerful as being together face-to-face. When you factor in the travel time and all the expense and hassles of air travel, the benefits of being face-to-face fade. Communication networks can also deliver a reasonable facsimile of sightseeing, albeit not the full tourism experience. A high-resolution drone video camera flying around Grand Canyon or some other tourist attraction can deliver views that humans simply cannot experience directly themselves.

Just like in The Matrix, the authorities in our society (government officials) prefer having people in their pods, plugged into virtual reality. That way people burn less fossil fuel, consume less energy, and are more docile. One of the most surprising aspects of the COVID-19 endemic to me was that, for the most part, students and parents meekly accepted the destruction of the in-person educational experience. There was some pushback, but the vast majority did as they were told, to the detriment of the students. From the government’s perspective, the lockdowns were so successful that I have no doubt there will be more in the future, for a variety of reasons: public health, weather, climate, and economics (especially shortages).

The world is moving towards The Matrix, and most people are going willingly. As for me, give me the red pill.