The Fourth Turning: An American Prophecy, by William Strauss and Neil Howe, was published in 1997, which is now twenty-five years ago. The book’s subtitle promises “What the Cycles of History Tell Us About America's Next Rendezvous with Destiny”, with the “next rendezvous” being the present, the period between the mid-2000s and the 2020s. I decided to read the book because it is often cited with a certain amount of reverence by finance industry professionals whose opinions I generally respect. Of course I also wanted to see how accurate the authors’ predictions were.

If this cycle were to continue, that would mean that America is due for a major crisis right about now, in the 2020s. Right on schedule, the U.S. President said on July 2 of this year that “this is a time of war and global peril.” A few geopolitical observers, such as Dr. Pippa Malmgren, state that WWIII has already started, although most of the world’s population is still oblivious due to the secretive nature of the battles. The War With Russia is escalating further as I type this, with the U.S. close to providing Patriot missile defense system to Ukraine. The fallout from the COVID-19 endemic, and China’s role in causing it, has yet to fully play out. On the other hand, perhaps all these global tensions will subside, and Strauss and Howe will be proven wrong. 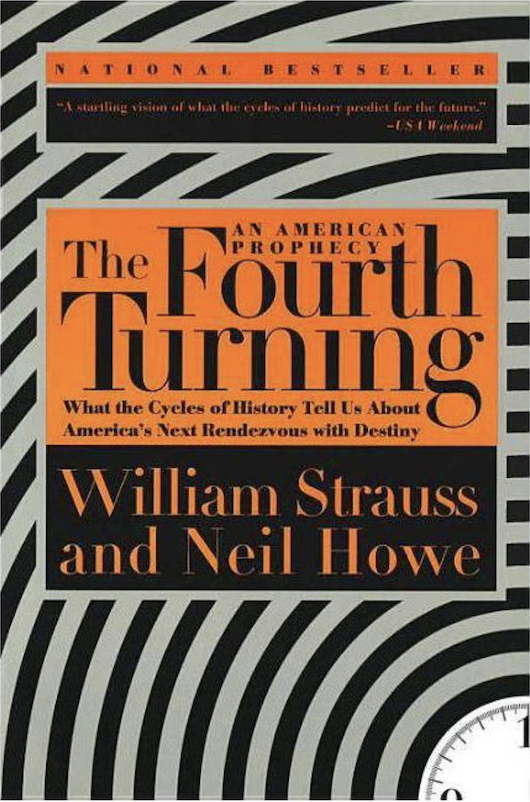 One aspect that Strauss and Howe get right, in my opinion, is their description of the American generations that existed at the time of the book’s publication. They argue that generational boundaries are determined by major historical events which impact the society in which children are raised. Being born in the second half of 1964, I am often placed in the Baby Boom generation due to the timing of the post-World War II excess birth cycle, even though I have never felt like a Boomer. I turned three during the Summer of Love in 1967, and my earliest lived-memories of American history are the withdrawal from Vietnam, Watergate, and the Great Inflation of the 1970s, not the boom years after World War II and Woodstock. Strauss and Howe place me firmly in Generation X, or the 13er Generation as they call it in the book, which is a Nomad archetype generation characterized by high independence and a practical, cynical attitude towards the world, especially the excesses of the Boomers. This feels right to me, and among other things explains why two of my favorite popular movie characters, both played by Harrison Ford, are Han Solo of Star Wars and especially Deckard of Blade Runner.

To build their case, Strauss and Howe look back in time to find prior examples of each of the four generational archetypes. I simply don’t know enough American history to know how valid these arguments are; it could be that the authors are cherry picking evidence that supports their thesis. Some of the arguments they make are based upon evidence that falls within the realm of social science and societal observations made at the time, both of which are much more debatable than the historical record. There is a fair bit of pop psychology when describing the current cycle at the time the book was written, a Third Turning cycle called the “Unraveling”. Many aspects of American society, such as the Culture Wars, appear to have unraveled further even though we should now be (or soon be) in a Fourth Turning era of national solidarity. In the current Fourth Turning, the Millennial generation is supposed to be a Hero archetype generation that helps save American society, similar to what the G.I. generation did in World War II. I think it’s fair to say that we haven’t seen this yet.

Working in Strauss and Howe’s favor as prognosticators is that, of the five possible triggers for the Fourth Turning crisis, three of them have occurred:

Will 9/11 mark the start of the latest Fourth Turning, similar to the way that the stock market crash of 1929 marked the start of the last Fourth Turning, which was followed by the Great Depression and culminated in World War II? Since 9/11 we’ve had the so-called Great Financial Crisis and Great Recession, then a pandemic, and now a war in Europe. Coincident with the 80-year historical cycle described by Strauss and Howe is an 80-year debt cycle, in which the United States builds up large amounts of debt fighting each of the Crisis-era wars. Most of the debt is then effectively defaulted upon by inflating it away. The inflation has already begun, which is another argument in favor of a Fourth Turning being underway.

I recently heard an interview with Neil Howe who promised that a new version of the book would be forthcoming. Fast-moving current events may doom that effort.