Book review: The Lords of Easy Money: How the Federal Reserve Broke the American Economy, by Christopher Leonard

tl;dr: Confirms the feelings of anti-Fed folks, but won’t convince the money printers to stop...

The most surprising aspect of The Lords of Easy Money: How the Federal Reserve Broke the American Economy (TLEM) is who wrote it. It wasn’t written by Ron Paul, or an Austrian economist such as Bob Murphy, or a well-known Fed critic such as Peter Schiff or Jim Rickards. Rather, author Christopher Leonard’s previous book, Kochland, was an expose of the Koch brothers. Leonard drops a few comments about Donald Trump and Fox News in TLEM that make it clear he is a fan of neither. Usually people of Leonard’s political persuasion think of themselves as champions of the poor and middle classes, and believe that the less well-off benefit from loose monetary policy (colloquially called “money printing”). Yet Leonard has the temerity to analyze whether that is actually the case, and to describe what happens when the Fed creates trillions of new dollars from thin air and injects them into the economy through the 24 primary dealer banks on Wall Street.

Surprise! The money, according to Leonard, primarily benefits Wall Street banks and hedge funds; corporations that can take advantage of artificially low interest rates; the insiders at the top of those firms; and investors who have seen the value of their assets (stocks, bonds, real estate) reach all-time highs. Leonard spends much of TLEM providing a detailed view of how the Fed’s Zero Interest Rate Policy (ZIRP) and Quantitative Easing (QE) distort the financial markets and enrich Wall Street firms, corporations, and their top personnel.

However, some of the money showered upon Wall Street and corporate America is supposed to “trickle down” to benefit the average American worker, through a better job market or wages or both. Leonard doesn’t use the term “trickle down”; perhaps if he did, more of his political persuasion would realize what is going on. Tax cuts for the rich that are supposed to trickle down to the lower and middle class are widely ridiculed, yet Fed bailouts for the rich that are supposed to trickle down to lower paid workers are not. When the Fed did its biggest-ever round of bailouts, ZIRP, and QE during the COVID-19 endemic (policies which are just now starting to reverse, after more than two years), almost all across the political spectrum applauded. The stock, bond, and real estate markets reached all-time highs. Meanwhile real wages for American workers (which factor in 40–year high consumer price inflation) are down, those who survive on fixed incomes are much worse off, and the number of employed Americans still is below the pre-pandemic level. 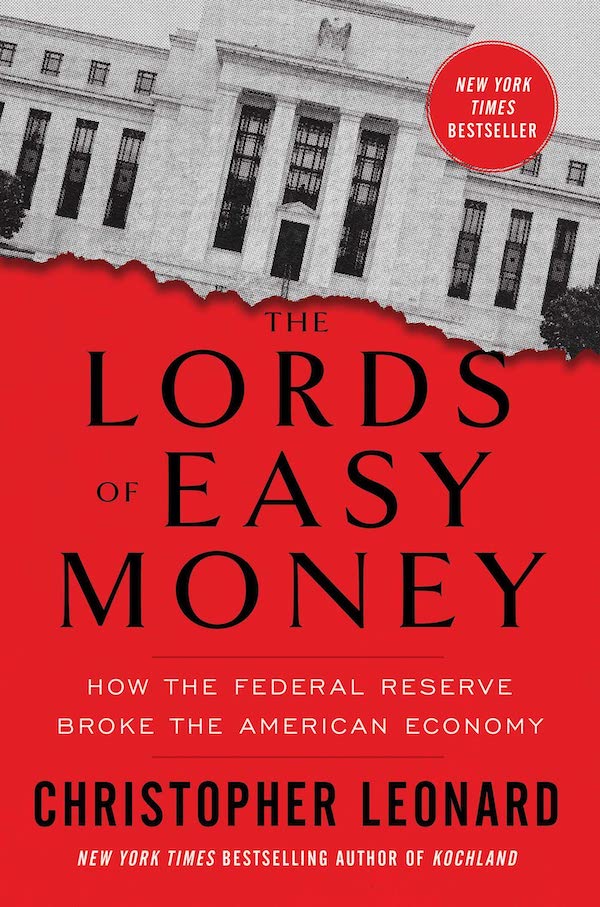 To put this contrast in human terms, Leonard profiles Rexnord, an old Milwaukee manufacturing company that was current Fed Chair Jay Powell’s big payoff when he was at private equity firm Carlyle Group. Powell took advantage of the Fed’s tidal wave of easy money to take out loans to acquire Rexnord, then later flipped it to another private equity firm (which borrowed even more money) at an even higher price. Rexnord worked out great for Powell, who pocketed millions, and not so great for Rexnord’s workers, one of whom is profiled in the book. It’s an old story: it’s actually the same story described in the movie Wall Street, which came out in 1987 during the initial junk bond era. Junk bonds never went away: they actually got more plentiful, thanks to ZIRP, QE, and the Federal Reserve.

Leonard explains how the Fed wandered into the “QE Infinity” trap through a series of decisions that were clearly, in retrospect, made on faulty models and assumptions. It started with Alan Greenspan, whose philosophy was to ignore asset price inflation, allow and even encourage asset bubbles, and only tighten money supply if consumer price inflation (CPI) started to rise. CPI was surprisingly low, due in large part to the opening of China and other low-wage economies, which put downward pressure on the wages of American workers, including the Rexnord worker profiled by Leonard.

There were Fed Open Market Committee (FOMC) members who voiced strong reservations to ZIRP and QE at the time, but the curious politics of the Fed, which stifles dissent to achieve a unanimous or near-unanimous decision, ended up in groupthink. If there is a hero in TLEM, it is Kansas City Fed President Thomas Hoenig, who correctly foresaw the problems that would result from ZIRP and QE, and who was the only one to stand in opposition when the votes were tallied.

Surprisingly, Jerome Powell was a ZIRP and QE skeptic when he first joined the Federal Reserve. He has now done more QE than all the other Fed chairs combined. It shows just how powerful the forces are that the Fed has unleashed, and how trapped it is. Leonard argues that the situation is more than a failure of the Federal Reserve: it is also a failure of our democratic institutions that left the Fed to use its imperfect tools. The Fed’s primary two tools are setting interest rates (the price of money) and buying/selling assets from/to 24 of the largest banks on Wall Street, so that’s what it used. The end result isn’t free market capitalism. Capitalism without bankruptcy isn’t free market capitalism. We have state-directed capitalism.

It would be enlightening to hear Leonard debate an MMT proponent such as Stephanie Kelton on the topics of ZIRP and QE. MMTers love ZIRP: they think interest rates should be set at zero forever. Some of their belief appears to stem from a simplistic Marxist dislike of rentiers, and a failure to realize that the rich are getting richer not by owning 30-year U.S. Treasuries that pay 2% interest per year, but by borrowing and leveraging their asset portfolios. MMTers believe that even the slightest move to raise interest rates will hurt the poor the most and cause even more inflation, by raising corporate borrowing costs. As for QE, MMTers think it is just swapping one asset for another and has no real effect at all on the economy. It shows just how far the economics profession is from being a hard science when practitioners of it cannot agree who benefits more from ZIRP: the rich or the poor.

How does this all end? No one knows, of course. The debt built up by our government and corporate America never gets paid off and forever gets rolled over. This works until it doesn’t. It appears to me that we will lurch from crisis to crisis, each time with the Fed printing more money to bail out financial companies and corporate America, until the entire system collapses, probably due to intolerable consumer price inflation or wealth inequality or both.